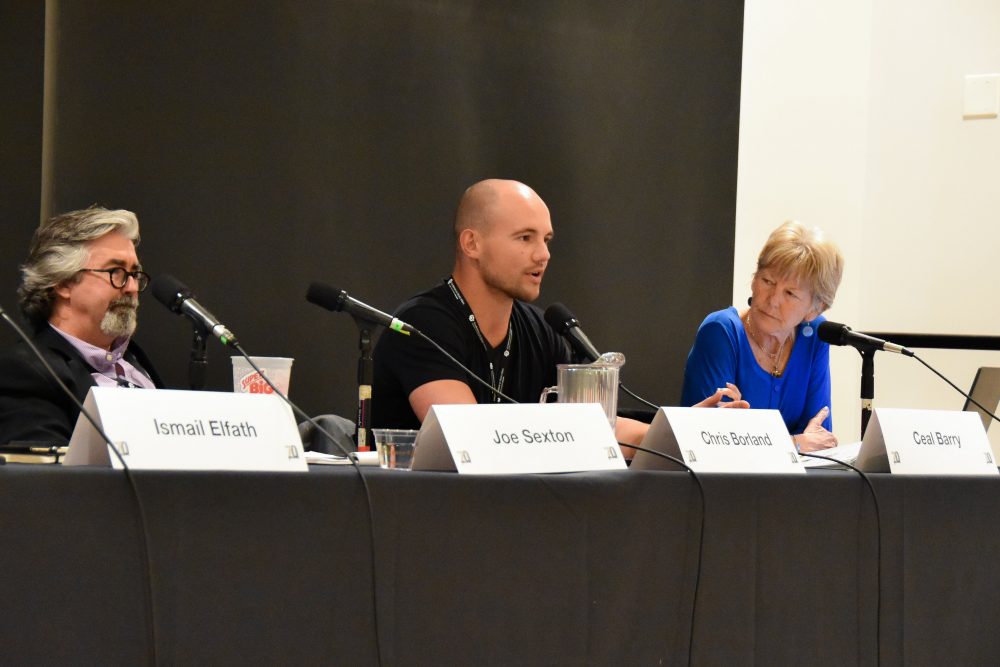 Chris Borland, a former student athlete, discusses how students athletes are used by their schools during the “Foul Ball: Corruption in Sports” panel at the Conference on World Affairs. Apr. 10, 2018. (Fiona Matson/CU Independent)

The Conference on World Affairs doesn’t cover much about the world of sports, but the “Foul Ball: Corruption in Sports” event that took place Tuesday afternoon asked tough questions about the darker sides of the sports industry.

Barry and the panelists had a conversation on topics ranging from the sex scandals in the U.S. women’s gymnastics team and Pennsylvania State University, to exploitation of student athletes at colleges and the suppression of knowledge about brain damage from the NFL.

As each panelist read their opening statements before taking questions, Sexton, who spent 25 years at the New York Times, listed off many different examples of corruption that has occurred in sports. He spoke at length about the sex abuse scandal within the U.S.A. women’s gymnastics team, where doctor Larry Nassar was found to have molested hundreds of gymnasts over decades before being exposed.

“Power, money and the imperative to win. Put those together and you’ll have corruption,” Sexton said. He said he saw no reason to continue having faith in the world of sports when abuse is so rampant, and urged the audience to be angry at the corruption.

“What I encourage you to feel now…is fucking rage,” Sexton said about the Nassar case.

The most pessimistic of the panelists about the future of sports, Sexton blasted places like Penn State and other universities for continuing to allow these issues to happen under their watch.

Borland, who announced his retirement from football after playing only one year professionally, fearing further head injuries, mainly focused on the corruption around college athletics. He believes it is unfair that college athletes remain unpaid while generating millions of dollars of revenue for their universities, and said the focus on sports instead of education is hurting student athletes’ opportunity to succeed.

“I’ve seen young athletes from the inner cities put on a conveyer belt and passed through,” Boreland said, describing students he played with who were not being academically prepared for a college workload. “These are people that have no business being in a college setting.”

Boreland said he hoped that changes could be made to make football safer for young players, but doesn’t know if things can be improved at the collegiate and professional levels.

Elfath, who has reffed over 150 professional soccer games, addressed the recent FIFA scandals surrounding choosing the location of the World Cup, and what corruption he experienced on the other side as a referee.

“It is generally accepted now to win by any means necessary,” Elfath said. “Whether that means hurting yourself, the other team, or arguing with the referee, you go at all costs.”

Elfath said he faces pressure not to sanction players for rule violations because fans will be upset if their favorite player is taken off the field. He said this kind of pressure shouldn’t be a part of his job, but it is normalized by the industry.

Elfath put the pressure on sports fans in the room for the role they take in perpetuating this behavior.

“I think it will require players to take a stance,” Boreland added.

Elfath also urged reporters to cover “the other side of sports” and not just the games, pointing to the stress and mental health issues referees and players face that often don’t get discussed.

The 70-minute conversation was forthcoming and at times heated, with all of the panelists sharing their emotions. The conversation dove into the negatives of sports and painted worrisome images of what happens behind the scenes, though some of the speakers, especially Barry, had a more positive tone.

At the end of the talk, Barry proposed the idea of training coaches, just like a doctor or teacher would be required to have training in order to do their job.

“My degree was in accounting,” Barry said. “Why should that make me qualified to coach basketball?”