Hundreds walk out of class in protest of CUSG budget cuts

Roughly 200 students protested CU’s decision to slash CU Student Government’s (CUSG) budget by over 90 percent, with many calling for the chancellor’s termination at the impromptu rally today.

Students gathered at the fountain area outside the UMC at 2 p.m., carrying signs and chanting “heck no DiStefano,” “students for students” and “this is what democracy looks like.” Students at the protest said this decision is an affront to student’s voices, and many expressed concern about the effects of a dramatically reduced student government.

A group of students and several CUSG election candidates went to today’s Board of Regents meeting in Colorado Springs to advocate for CUSG in front of the board. After hearing the student’s grievances, DiStefano released a statement saying he “will be pulling back on the timing of this move in order to allow for further conversation and engagement with the students.”

Several student activists expressed appreciation for the delay, but remain frustrated with the lack of communication.

“We should not have had to go to the Regents, we should have had these dialogues before,” said BOLD candidate Mavjuda Ashurova, who attended today’s Regent meeting.

“I would like DiStefano to either resign or revamp the funding that student government gets,” said John Simpson, a sophomore and current CUSG international student liaison. “Decreasing our funds would only limit our voice and limit […] outreach.”

In a statement, CU spokesperson Deborah Mendez-Wilson said student voices will remain “paramount.” She said the biggest change will be the oversight CUSG had over “cost centers,” popular student areas like the UMC and Recreation Center that were under CUSG financial oversight.

DiStefano said he made this decision to “relieve the burden of managing professional staff and facilities.” CUSG will still oversee some student organizations, such as Program Council and the Cultural Events Board.

The sudden decision came as a shock to many in CUSG. DiStefano consulted with several senior administration officials, according to a statement released yesterday. No students were involved in the discussions. According to CUSG leaders, DiStefano now has plans to meet with them soon.

“We were completely left in the dark, purposely,” CUSG homecoming and athletics chair Hadleigh Swarts said.

Towards the end of the protests, junior Richard Folsom, a member speaking on behalf of the International Socialist Organization (ISO), took to the makeshift stage to criticise CUSG for their lack of representation of marginalized students.

“The move to strip 93 percent of the funding from CUSG has come at a time when other valuable resources [that help marginalized students] are being gutted as well,” said Folsom, “I don’t see a lot of people at protests started by people of color.”

Folsom was originally met with pushback from protest leaders and some crowd members, with some trying to chant him off the stage. About half the crowd clapped as Folsom ended his speech, some voicing vocal support. 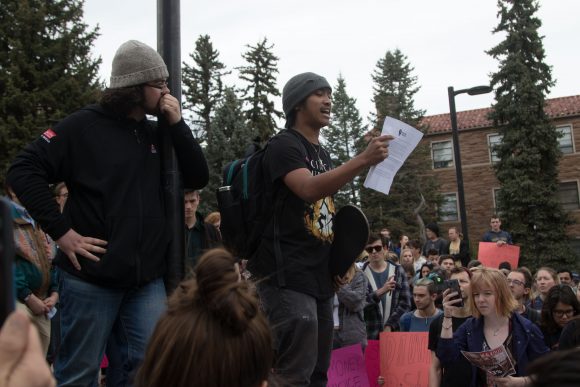 Richard Folsom speaks out against the “undemocratic nature” of CU and CUSG’s lack of support for marginalized groups during the protests on April 5, 2018. (Jackson Barnett/CU Independent)

“[CUSG should] support people of color…they do not do a lot of that,” sophomore Julisa Granados said in agreement with Folsom’s speech.

Representatives from each ticket campaigning in spring elections were present at the protest. All candidates agreed to suspend their campaigns for the day to unify in opposition to DiStefano’s decision. Members of Turning Point USA also held signs in support of CUSG.

“We now have a deep personal connection with the people on other tickets,” said Prism tri-exec candidate Michael Gohde.

While shocking to many currently in CUSG, former director of finances Marilyn Alexander said she saw it coming.

“This is a devastating situation to the once-effective self-governing structure of CUSG, but it is not without blame,” Alexander said. “I can’t stress enough the misuse of finances that were happening inside of CU Student Government.”

The UMC, one of CUSG’s cost centers, had needed repairs for several years. Mismanagement of building maintenance was one of the reasons DiStefano cited in his decision for remove their financial oversight of cost centers.

“The thing is CUSG has its flaws…[but this decision] takes away the opportunity for us to fix the problems that we have,” said Ciera Dykstra, CUSG representative-at-large.