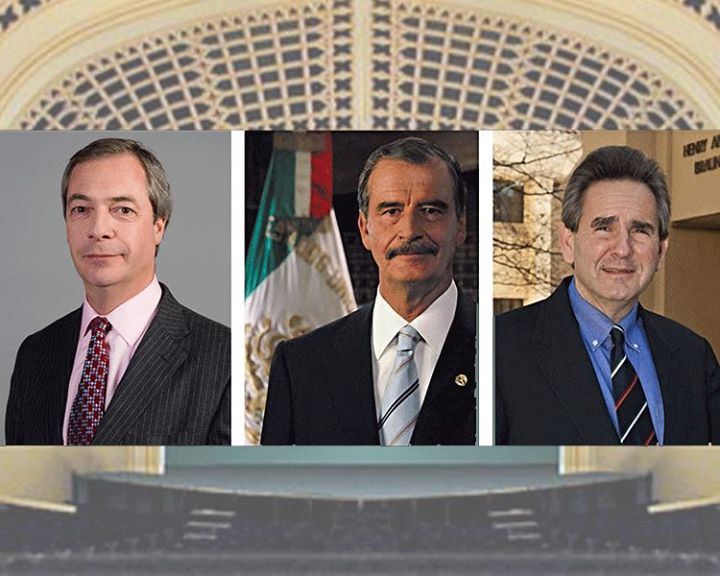 Nationalism vs Globalism – A Discussion between Nigel Farage and Vicente Fox moderated by Dr. Robert Kaufman, CU’s visiting professor in conservative thought and policy. (Graphic via The Steamboat Institute)

The architect of Brexit, Nigel Farage, and the former President of Mexico, Vicente Fox, debated the competing theories of nationalism and globalism in Macky Auditorium on Monday.

The importance of fostering dialogue between opposing views was heavily emphasized at the debate.

“The world has changed,” Farage said. “Recognize it, get with it and let’s have proper debate.”

The two politicians were brought to campus through the Steamboat Institute, a conservative-leaning nonprofit based out of Steamboat Springs. The organization is bringing Farage and Fox to campuses throughout the U.S. as part of their Campus Liberty Tour promoting “respectful debate” and free speech on college campuses.

Fox, a supporter of globalism, began his argument by advocating for love and compassion. Globalism, he believes, leads to progress and building a better world. Fox advocated for politicians to lead with dialogue and love rather than fear.

Farage began his argument by telling the crowd members that they would look back and think that 2016 was the “year that changed history,” pointing to Brexit and the election of President Trump as pivotal to the return of nationalism.

He argued that the return of the nation-state is an essential building block to success. He believes nationalism fosters pride in an individual’s country, and can foster cooperation between neighboring nations.

Though Farage and Fox bickered and became heated at certain points during the debate, they also arrived at a consensus on many topics.

Fox mentioned multiple times that a country should be able to control its borders as it sees fit, adding that if a country wants to build a wall, they should be responsible for paying for it—a clear shot at Trump, who campaigned on the promise that Mexico would be required to pay for a wall on the U.S.’s Southern border.

On the topic of immigration, Farage advocated for a point system like Australia’s that assesses an individual’s abilities and what that person will bring to the country. He believes such a system will bring more skilled populations into a country.

Fox and Farage’s opinions diverged, however, on the subject of Trump.

Fox voiced that he enjoyed debating with an opponent who is for Trump, adding that he is against Trump and all his ideas. Farage argued that Trump’s immigration policies are significant and will change immigration for the better.

Farage closed his argument by thanking CU for bringing a conservative speaker to campus. Reiterating the importance of love and compassion, Fox ended his argument with the sentiment that the only things which will stop the world’s progress are war, violence and hate.

Following the debate, Farage was asked why it is important to bring diverse perspectives to college campuses.

“Critical thinking is to say, here’s a problem, here are two possible solutions to it, and they both have merit. Even though I’ve chosen this one, I respect the right of the individual to have that one.”

A seeming left-leaning bias in the education system and the use of aggression as a substitute for thought are two of Farage’s main concerns. Education, he believes, should present valid arguments on various sides without telling students what is right or wrong and instead, allowing them to make up their own mind.

Connor Scholfield, a CU graduate, thought the debate encouraged reasonable dialogue. He was impressed that the debate was not very inflammatory.

“I’m a pretty liberal person, I would say, and I actually found myself agreeing with a lot of what Nigel Farage was saying,” Scholfield said. “They were both very well spoken.”