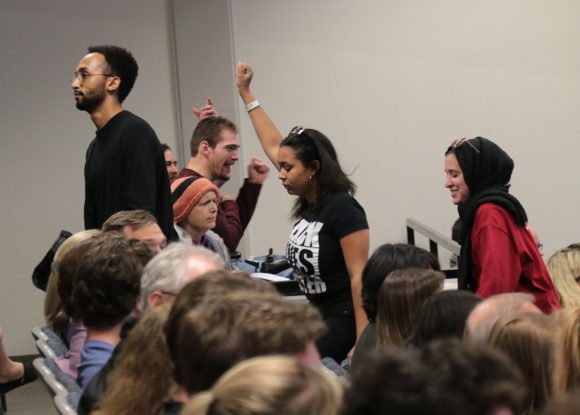 Huff had originally told reporters that no student fees had gone to pay for Coulter’s speaking fee, only towards security for the highly-anticipated talk. Huff corrected his previous statement to the CU Independent this afternoon in a conference call with Turning Point USA’s (TPUSA) CU chapter president Ashley Mayer.

$2,000 of the students’ fees that TPUSA used to pay Coulter’s fee came from the Student Organization Allocation Committee (SOAC).

“This event was no different than other events that have been allocated by SOAC in the past,” said Ye Ji Chai, SOAC Chair, adding that the committee raised concerns about Coulter’s controversial presence and the potential for protests.

In an interview before the event, Mayer praised the funding boards for being “fair” in their questioning and funding for their event.

The other $500 from student fees came from the Arts and Sciences Student Government (ASSG). This was part of a $2,500 event funding grant they provided to TPUSA for the event. TPUSA used the other $2,000 for security costs inside the event.

CUSG’s Representative Council provided $1,000 of student fee funding for TPUSA’s security. The Vice Chancellor for Student Affairs’ office contributed $600 of administrative funding to the event’s inside security budget as well.

“I am disappointed some of my money is going to that individual,” said Heraa Hashmi about Coulter. Hashmi is president of CU’s Muslim Student Association and helped organize the silent walkout of the event.

CU enlisted a heavy police presence outside the event as well, erecting fences and floodlights around the University Memorial Center. “Airport-like security” was required for those entering the event, all of which will be paid for by the university, not TPUSA.

Last year, several arrests were made when TPUSA and CU’s chapter of College Republicans brought conservative provocateur Milo Yiannopoulos to campus. CUPD only charged $3,500 to TPUSA for security inside the Coulter event, which they calculated from plans used in the Yiannopoulos event. 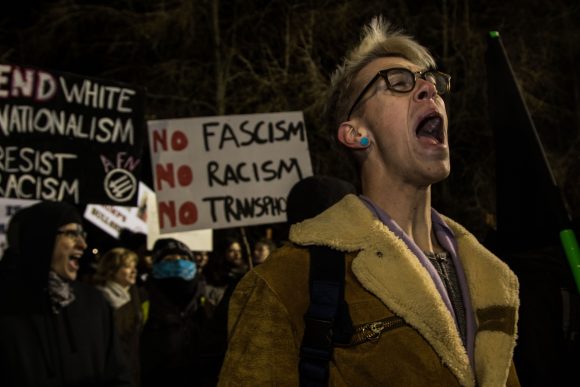 A protester chants during protests outside of Milo Yiannopoulos’s speaking event on Jan. 25, 2017. (Jackson Barnett/CU Independent)

Mayer originally did not respond to multiple requests for comment from the CU Independent and other media outlets on sources of the funding for the Coulter event. TPUSA’s social media accounts called a story by the Daily Camera “FAKE NEWS!” on their Twitter for reporting that no student fees had gone to paying for Coulter’s fee, as Huff had previously said.

A Camera reporter had approached Mayer to ask her about event funding, but Mayer did not respond.

“Obviously planning events is very stressful…and I did not have time to comment on things,” Mayer said on a conference call with Huff today.

Coulter’s appearance drew protests inside and out of the event. Around 50 students silently walked out of her talk to join vocal protests outside. They chanted, “fuck white supremacy,” “your racism offends us” and “free speech not, hate speech.”

Coulter railed against immigrants, liberals and other marginalized groups in her controversial talk.

“It got to a point where she wasn’t trying to educate, she was just trying to indoctrinate,” Hashmi said.

TPUSA members were more pleased with the event, even though Coulter was not the group’s first choice.