Correction: a previous version of this article stated the Gay-Strait Alliance helped in organizing the protests and walk out, while members of the GSA participated in the protests, they were not involved in the planning of them. The article has been updated to reflect this information.

Ann Coulter’s talk at CU Wednesday night was marked by mild protests and debate between Coulter supporters and protesters.

No arrests were made despite a heavy police presence. Around thirty police officers from multiple departments, including CU Police Department, Boulder County Sheriff’s Department and Boulder Police Department stood watch outside of the event. Some officers wearing SWAT and military-style gear and an armored truck was parked behind the University Memorial Center. 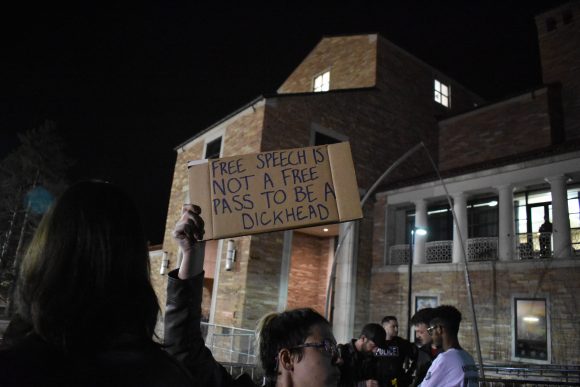 Protests outside of the Ann Coulter talk on March 21, 2018. (Angela Smith/CU Independent)

Ryan Huff, CU spokesperson, said that they were not planning on violence but wanted to be “better safe than sorry.” Protests broke at Colorado State University last month when Turning Point USA founder Charlie Kirk spoke at the school. Several arrests were made last year when TPUSA brought Milo Yiannopoulos last March to CU.

A small group of protesters gathered outside the UMC during Coulter’s talk, holding signs with slogans including “fuck white supremacy,” “your racism offends us” and “free speech not, hate speech.”

Protestors planned a walkout from the event twenty minutes after Coulter’s talk began, with around 50 students leaving to join the vocal protests outside.

“As members of the LGBT community we feel it’s very important to combat hate speech when we see it,” said Annie Myrick, who protested outside with a small group of people draped in pride flags. “All Ann Coulter does it spread hateful rhetoric about minorities in this country.” 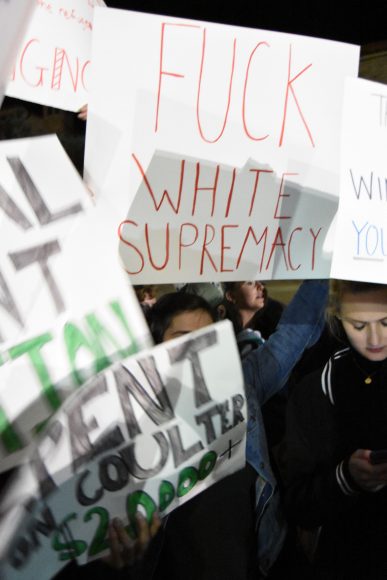 The Young Democratic Socialists of America were outside the event with a booth promoting socialism. They held a toiletries drive with the tongue-in-cheek name “toilet paper USA” and filled several bins full of sanitary products for the Boulder homeless shelter.

The silent protest inside the Coulter event was planned by a coalition of student groups called “The Collective.”

“It got to a point where she wasn’t trying to educate, she was just trying to indoctrinate,” Heraa Hashmi, president of the Muslim Student Association, said of Coulter’s talk. Hashmi was one of the organizers of the silent walkout and said that Coulter’s talk was mostly made up of personal attacks. 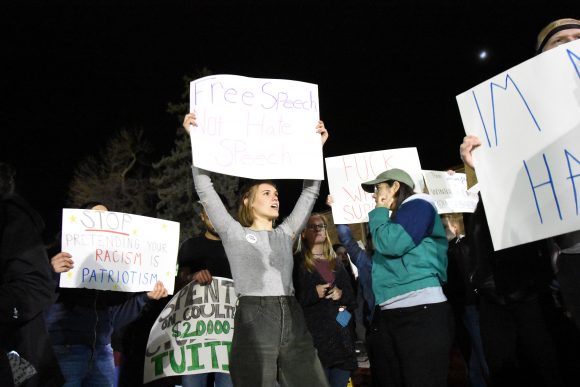 Protestors chant outside the Ann Coulter “this is what democracy looks like,” on March 21, 2018. (Fiona Matson/CU Independent)

“Bringing people like Ann Coulter to campus is harming students of color and queer students who go here,” said Berkeley McCarthy. “And they used our tuition with zero transparency to bring her here, which is not fair.”

A small group of Coulter and Trump supporters engaged with the protesters partway through the night. Though some became aggressive, people generally engaged in genuine dialogue with each other. One Trump supporter engaged in a long discussion with several protests about police violence, another about trans rights.

The event drew a number of people from outside of Boulder. Kevin and Steven were two attendees who came from Denver and Colorado Springs. Steven said they go to events that promote free speech often and were also at the Bobby Seale lecture at CU in February.

“I think we’re having good discussions,” Steven said about the protest. “Everyone’s been very respectful, we don’t feel threatened at all.”

After the Coulter talk ended and people came out of the lecture hall and joined the demonstration, the protest grew more heated. People traded chants of “build the wall” and “no Trump no KKK no fascist USA.” Despite rising aggression, the protest remained largely calm. After the talk ended, people gradually dispersed, leaving or going to the Buffs United event.