Interview with Pete Holmes on “Crashing,” campus and religion 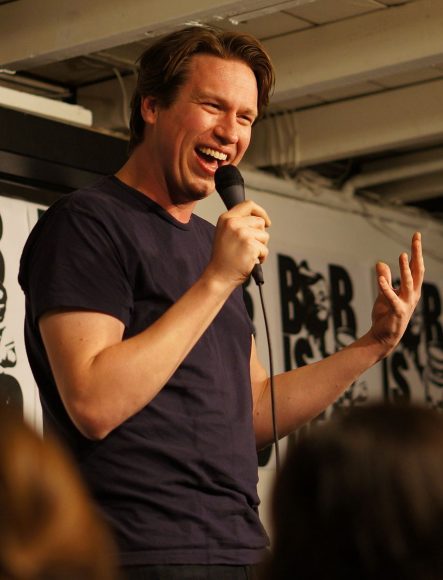 The CU Independent’s head arts editor Austin Willeke spoke with comedian Pete Holmes and other journalists about his HBO comedy show Crashing, which just completed its second season. This interview has been edited for length and content.

Austin Willeke: At CU, Hannibal Buress performed here last year and I got to see him, and he just got relentlessly heckled. There were some frat boys on drugs that rushed the stage and pretty much ruined the experience for everyone. He was noticeably pissed off by the end.

AW: And I know a lot of people always ask the “Political Correctness” question when addressing college campus performing, but to kinda steer away from that, in terms of the crowd, how do you find the crowd’s reactions in the college circuit different than just performing at a stage anywhere in the city?

PH: Ya know, it’s a mixed bag. I’m actually kinda surprised to hear that happened to Hannibal, because he is so great. I’m sure the drugs probably had a lot to do with it. And that was my experience in the college market, for the most part it was a lot of surprisingly polite and good audiences. But every once in awhile you do some show that was sponsored by a fraternity. On St. Patrick’s Day, this is something I actually did at the Universtiy of Michigan, you’d be driving in at 11 a.m. and everyone is already passed out on the lawn in front of the frat house, and you think, “oh this one might be more work than the others.” And that’s kinda funny because what happened to Hannibal had happened to me at that show, and that is more what we want to explore because that’s kinda what Crashing is about is when it goes wrong. That’s often way funnier than just doing the show. That’s not to say people should heckle, but when they do, it sometimes turns into a good story.

AW: So your show now works in this operating genre that is loosely referred to as the “the comedian semi-autobiographical genre,” with shows like The Jim Gaffigan Show and shows like Louie… that show’s obviously coming in a different light now with recent contexts of course. There are some critics that say there is a lot of clout in that genre, with a lot of people competing in an almost similar category. Do you think that has cast an unfair light on your show or do you think this genre is looked upon differently? And b: what is it about Crashing that sets it apart from its contemporaries? What about Crashing sets it apart from the rest?

PH: I see that that’s a two-part question, but I think I can answer both in one. There is a lot of precedent with Maron, and Louie and Seinfeld even, and Gaffigan for shows about comics, one of the reason I think that works is because no matter what it is you’re into, be it journalism or photography or acting, they just want to be a happy thoughtful person. You can see that struggle in a comedian. A comedian wants to be who they really are. It’s a struggle for authenticity. So while it’s a crowded landscape for sure, I think Judd [Apatow] was very smart in picking out what made ours different, which was that my character is religious, and then bad (laughs). He’s bad at comedy. And he’s religious. Not terrible … what we do is I often just do the material that I wrote at the time when I was starting out. That’s how we kinda strike that balance where it’s like, he’s not doing great, but you see some potential, hopefully, in what he’s doing. But the story underneath all that is a guy who is trying to not lose himself. Not lose his values or his soul as he see’s it. I think that’s one of the ways we stand out. And I think that’s why we’re always going to see shows about stand up, because they can be funny while they’re trying to be authentic, which is what we’re all trying to do.

AW: A big part of your public presence that shows up in your interviews a lot is that you grew up in a very Christian household, and that’s kind of a part of your identity. A few minutes ago you said that you were formerly religious. And don’t worry, I’m not going to dive into the ethics of being religious or not, but I do want to know how does not being religious now affect your perspective on playing a character who is religious, and how does that new perspective you gained give you insight into playing that character and how to portray them.

PH: You know I think it’s funny, I did all these Batman videos. I don’t know if you guys have seen em.

AW: That’s how I found out about you!

PH: I figured, you’re in college, there’s a good chance that you saw them. Similar to Batman actually, in the Batman videos we were certainly making fun of Batman, but you can also tell that like, obviously I’m a fanatic. I love Batman, I love those movies, I think they’re great. So similarly, whenever I’m kind of recreating or even finding humor in the Christian community, it’s done in that same sort of way. It’s done from a loving place with respect. And even a fondness. We did one episode in the first season where he goes back to church at a baptism, and it actually made me feel kinda nostalgic and warm. So there’s nothing like, snarky. I do consider myself a post-evangelical but once people see where I used to be, I don’t look down on that, it’s just like a different room, or a different approach. That’s what’s working for them at that moment. And that’s what was working for me at that moment. And then after I found new ways, and to be honest more inclusive and a little bit more open-minded, which I appreciate. Because when I was super religious I had to walk around with the burden of thinking that most people I knew were going to hell. And your lifestyle or sexual orientation was immoral or unethical, and I was very happy to leave that behind.

HBO’s Crashing created by Pete Holmes and Judd Apatow is currently streaming on HBO GO and just wrapped up its second season.