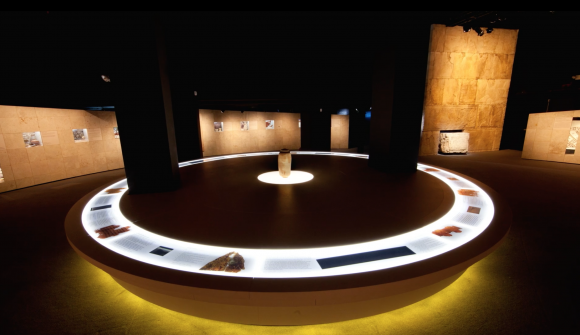 The exhibit of the Dead Sea Scrolls in Denver. (courtesy of the Denver Museum of Nature & Science)

The Dead Sea Scrolls are coming to Denver for the first time, facilitated in part by CU biblical scholar and professor Samuel Boyd.

The Dead Sea Scrolls are part of an exhibit opening Friday at the Denver Museum of Nature and Science, which features 600 artifacts from ancient Israel. It is a touring exhibit on loan from the Israel Antiquities Authority and will feature scrolls that have never been displayed to the public before.

“The Dead Sea Scrolls are undeniably one of the greatest artifacts of all time,” said Steve Nash, curator of the exhibit.

The scrolls are a series of Jewish texts discovered near the Dead Sea in Israel in 1947. They contain some of the oldest manuscripts of the Old Testament, as well as new texts that have never been seen before. Boyd said that they were written in a time before there was a set number of books in the Hebrew Bible and give a window into how the Bible came to be what it is today.

“The Dead Sea Scrolls show us how dynamic the Bible is,” Boyd said. Boyd is on the advisory board for the exhibit and is helping to plan a series of lectures in May to go along with the exhibit. The series is still being planned but will feature biblical scholars from around the country who will speak at the museum as well as nearby universities, including CU.

Boyd said that because the exhibit will draw interest from such a broad group of people — religious practitioners, academics, students, etc. — it was important for them to have a forum where people could learn more about the history of the scrolls and foster discussion.

The exhibit contains artifacts from 1200 BCE up to the beginning of Islam around 600 CE. Ten scrolls will be on exhibit at a time, as well as artifacts such as weapons, figurines, coins, jewelry, textiles and a three-ton stone from the Western Wall of the Second Temple in Jerusalem, which fell in 70 CE. Nash said that the artifacts will help place the scrolls in the context of what life was like in the region at the time they were written.

The artifacts tell the visitors how the ancient Israelis “understood their world and wanted to be understood,” Nash said. Along with the displays, he said there will be events at the museum, live actors and exhibits that people can touch to bring the period more to life.

Boyd said he thinks the exhibit is more important than ever at this time because it helps people to learn how the Bible was created. He said that people on both sides of the political spectrum cite the Bible in their arguments, but few people really understand how the Bible came to say what it does. This exhibit will help the public to better understand it’s history.

“It makes the Bible become more human,” Boyd said. “It shows that it is more exciting than we sometimes think.”

According to a spokesperson from the Boycott, Divestment and Sanctions (BDS) movement, the exhibit is in violation of the academic and cultural boycott of Israel. However, none of the Palestinian advocacy groups in the Denver region are planning to formally boycott the exhibit. Friends of Sabeel Colorado, a Christian pro-Palestine group, said that they are hoping to have an event discussing the scrolls from a Palestinian perspective.

The exhibit opens Friday, March 16 and will run through Sept. 3. It requires timed tickets to view.