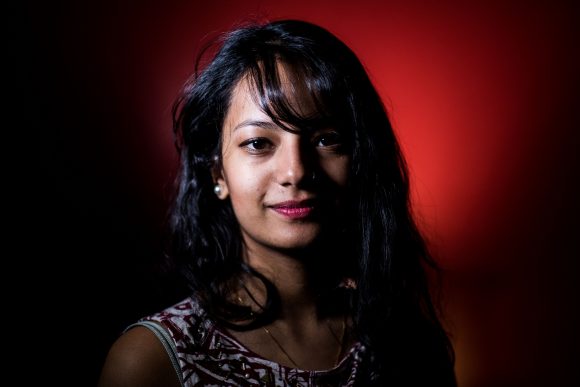 At first, Kushalta Subedi didn’t want to come to America. Her friends, family and life were all in Nepal—to her, America was just a big, mostly white, unknown.

Now a sophomore at CU and a U.S. citizen, she is trying to reconcile her place in a country she loves with a president that says the diversity visa lottery her family benefited from allows in “the worst of the worst.”

The diversity visa lottery offers 50,000 visas to randomly selected, prescreened candidates from countries with low immigration to the U.S. In 2015, the most recent year data is provided, people from Nepal received the highest number of diversity visas, according to analysis by the American Immigration Council. Over 2,700 Nepalese people, like Subedi and her family, have settled in Colorado.

Immigration has been a staple of American culture, synthesized in the popular description of American as “a nation of immigrants.” The United States Citizenship and Immigration Services recently removed the phrase from its mission statement, opting for emphasizing its role in “protecting Americans, securing the homeland.” The Trump administration is now charting a course for a dramatic reduction in legal immigration, and with it, a shift in the economic and cultural fabric of America, say immigrants and experts at CU.

After a Diversity Visa beneficiary from Uzbekistan allegedly rammed a truck into a crowded lower Manhattan bike path killing eight this past Halloween, President Trump set his sights on eliminating the program.

Trump told Congress he won’t sign any immigration bill that doesn’t end the diversity visa program and shift the U.S.’s family-based immigration system to a “merit-based” one. Currently, legal residents and citizens can petition for close family members to receive visa benefits, a process which two out of three immigrants who come to the U.S. use.

Although CU does not track the specific visa types of its employees, many who work in Housing and Dining Services benefit from the diversity visa and family reunification programs.

In 2010, Subedi and her family arrived in the city that many immigrants had come to before: New York City. From there, they settled in Boulder, where they had family and a Nepali community to connect with. Since 2004, Boulder has declared the third Sunday of April as Nepal Day in recognition of the sizable Nepali community in the county.

Due to the U.S.’s relatively unique family-based immigration system, immigrant communities have support networks when they arrive in the U.S.

“It was a huge help, having someone here,” said CU senior Samichhya Thapa, whose uncle was a U.S. citizen when she and her family immigrated from Nepal.

Trump’s proposed “merit-based” system would prioritize high-skilled, highly-educated immigrants. Claiming that immigrants are “taking our jobs,” Trump is charting a course towards a dramatic reduction in immigration to the U.S — limiting up to 22 million new arrivals over the next 50 years according to the libertarian think tank the Cato Institute.

The idea that when an immigrant gains a job means domestic worker loses one is “patently false,” said Brian Cadena, an associate economics professor at CU.

A recent 500-page report by the National Academy of Sciences (NAS) also found that the average worker’s wages face no direct impact from immigration. Although the topic is still debated, most mainstream economists agree with the NAS report’s findings.

However, when immigrants directly compete for low-skilled jobs with domestic workers, they often are willing to take lower wages and thus marginally depreciate wage growth, according to Cadena.

“It is simple supply and demand,” Cadena said.

When senior Stuti Pandey walks into the Center for Community, she is often greeted in Nepali with a welcoming “namaste.” Originally from Nepal, she was able to gain residency and eventual citizenship through her parents who were green card holders.

Pandey’s parents lived in the U.S. while she and her brothers lived in Kathmandu, only hearing their voices on the occasional phone call.

“My grandparents were my parents,” she said. When she first moved to the U.S., her parents were strangers as much as the country she now had to now call home.

After over a decade of living in the U.S., she now sees herself as an American, both in her heart and on paper. She gained citizenship a few months ago.

Pandey is not alone, many of the dining hall employees from Nepal and other places benefited from the program. Cadena warns that economies with large immigrant labor forces often see declines in economic growth when immigration is limited, recent research shows.

The family reunification program began in the civil rights era when most immigrants came from Europe. Now that 9 out of 10 immigrants come from outside Europe, the program plays a part in the changing demographics of the U.S.

CU is currently lobbying to ensure no changes are made to other visa programs that students, faculty and scholars use, such as high-skilled and student visas.

When Subedi thinks about the future, she worries about friends, family and her fellow countrymen back in Nepal. While she may not have wanted to leave when she was young, America is her home and she doesn’t want the opportunities given to her to be withheld from others.