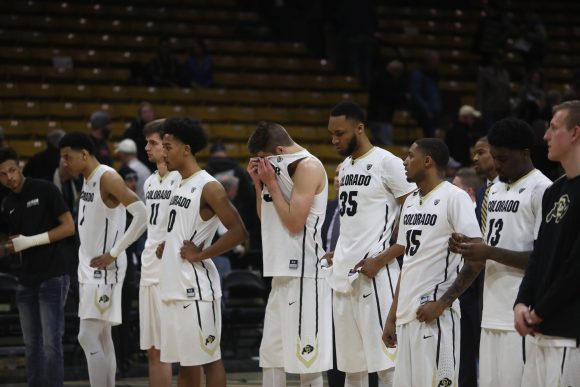 No story rings more truthfully for the Colorado Buffaloes men’s basketball team this season, as CU has attained a 12-3 record at home after defeating a potentially NCAA Tournament-bound team in the UCLA Bruins last Sunday.

The problems with this team, however, lies away from home. Not just this season, but in past seasons as well.

In Pac-12 Conference play this year, the Buffaloes have a 1-9 record on the road and are a combined 5-18 away from home in the past two seasons.

Look to this as the main reason why Colorado might not make the postseason. The Buffaloes currently sit with a 16-13 record. In order for the Buffs to make the postseason, they’ll likely need to win their next two or three games to have a National Invitational Tournament (NIT) berth.

Colorado not making the postseason is foreign to head coach Tad Boyle, who in his first seven seasons at the helm has yet to miss out on playing postseason tournament basketball.

For a coach that’s garnered success in getting his team to the NCAA Tournament and producing NBA talent over the last several years, seasons like these are rare.

“We haven’t played well enough on the road,” Boyle said. “If you look at every game there’s a different reason we lost, whether it’s guarding or rebounding.”

Colorado is also significantly worse in the rebounding department on the road compared to at home. The Buffaloes average 40.6 rebounds at home and 34.8 rebounds away from Boulder.

Plus, the Buffaloes’ assist to turnover ratio is 1.02 at home and 0.77 on the road. They currently rank near the bottom of the Pac-12 conference in that specific department for the season.

Senior guard George King, who’s been an integral part of the program for the past five seasons, gave his take on the multiple factors at hand that have led to Colorado’s sluggish resume on the road.

“One thing I can say is that this year we’re just not coming out with any energy,” King said. “[We’re not playing with] a lot of firepower early. Maybe we’re taking teams too lightly. Some of the leaders, talking about myself, aren’t necessarily doing a good enough job showing guys how to play on the road and how we have to keep our intensity.”

King is currently Colorado’s most prolific rebounder as he’s likely to lead the team in rebounding for two seasons in a row. He currently sits as the fourth-highest rebounder in the Pac-12, averaging about eight boards per game.

A fellow standout who’s also expressed frustration of playing on the road has been freshman guard McKinley Wright IV. Wright IV is ranked inside the top-20 in Pac-12 scoring, averaging 14.1 points per game and is in the top-3 in assists with 5.4  per game.

He mentioned that it isn’t as much of a matter of getting over a mental hurdle, rather a lack of execution.

Colorado will have at least two games to give it a chance for earning an invitation to the NIT. The Buffaloes will face the Utah Utes in Salt Lake City on Saturday afternoon for both teams’ regular season finales.

Up next, Colorado will play in the first round of the Pac-12 Tournament in Las Vegas, Nevada, where the Buffs’ opponent has yet to be determined.

Colorado ended a seven-game losing streak against the Utes as the Buffaloes defeated them in Boulder by the score of 67-55 earlier this February. The Buffs held Utah to only shooting 35 percent from the field on the night and Wright IV led the way for Colorado with 21 points on 8-of-12 shooting from the field.

“They’re going to play a lot of zone defense,” Boyle said. “They mix up their defenses a lot like we do so we just have to attack the paint and get the ball inside. Our offensive philosophy doesn’t change game-to-game, who were playing, we just play inside-out and attack the paint, get paint touches and have our three-point shots come as a result of that.”

If a loss were to take place in Utah, Colorado would fall to 1-10 on the road which would be their lowest winning percentage on the road in a season under the coaching tenure of Boyle.

The phrase “do or die” has been relevant for the 2017-18 Buffs for some time now, but with each loss all but guaranteeing there will be no postseason appearance for CU, Colorado’s margin for error at this point in the year is next to none.

The  Buffs and Utes will face off on Saturday, March 3 from Salt Lake City. Tipoff is at 5 p.m. MST.