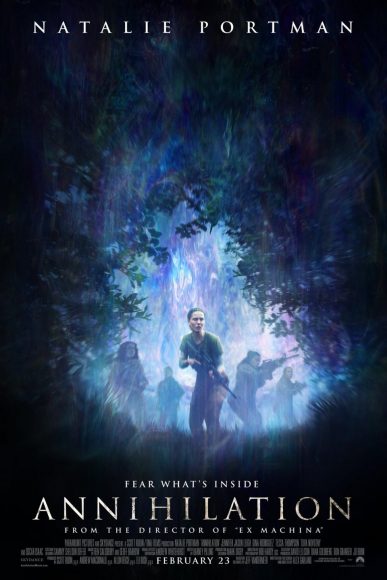 Alex Garland has been making waves in the film industry for quite a while now. He started out as a novelist with The Beach which was adapted into a 2000 film starring Leonardo DiCaprio. He went on to write terrific screenplays for 28 Days Later, Sunshine and Never Let Me Go. Then in 2014 he finally made his directorial debut with the brilliant Ex Machina.

Building off the momentum of his triumphant debut picture, he enhanced the scale of his follow-up, Annihilation, to a much larger vista.

The film is loosely based on the first book in a science-fiction trilogy. Annihilation is Garland’s individual vision of the Earth thrown off balance. It has become a place where emotional life and physical life can be shaped and changed without our understanding of why. Love, conviction and even our bodies are not stable enough to withstand the environment of this earth.

Natalie Portman is the lead in the role of Lena, who is married to Oscar Isaac as Kane. Kane is a soldier while Lena used to be a soldier before becoming a biology professor. Her world is suddenly interrupted once she realizes Kane may never come back from a mission. But one day, around a year later, he mysteriously wanders back into her life. He’s more distant than usual and she takes him to the hospital. On the way there she is taken away to a convoy where she learns about Area X, or, The Shimmer.

The Shimmer is a soapy gloss centered around a lighthouse but it is diffusing, encapsulating a small area of the planet. Satellites can’t see through it, radios don’t transmit out of it, communication from within is impossible. People have entered The Shimmer but only Kane has ever returned. Lena decides to go in with a crew of four other women to find out what happened to Kane while he was in the mysterious area.

The tale is similar to that of Andrei Tarkovsky’s Stalker, as it follows a team of misfits as they venture into an extraterrestrial area. Garland doesn’t have the eye of Tarkovsky —hardly anyone does — but he doesn’t need the legend’s vision to make a beautiful film of his own. He has the technology to make up for his lack of imaginative shots. With these computer-generated effects, Garland manifests visceral terror and beauty.

He gives audiences the gorgeous setting of The Shimmer, which is coated in luminous iridescent rainbow reflections. But he makes it horrifying by loading his film with images of a man being gutted alive as well as a scene involving a skull-faced bear, which is one of the most terrifying moments I’ve experienced at a theater in years.

But the luscious filmmaking doesn’t make up for the faults in the screenplay. Surprisingly, the script is the worst thing here. Based on a beloved novel and adapted by a beloved screenwriter, it’s shocking to hear the dialogue of an angsty teenager — “We’re all damaged here” — come out of the mouth of Tuva Novotny. The infidelity subplot is also misguided and doesn’t add anything to the film.

Annihilation is terrific to look at, tense as hell, but too convoluted and messy. Sure, this is a worthy successor to Ex Machina, but it’s not as special as Garland’s past work. He has made great pictures throughout his career but this isn’t one of them.