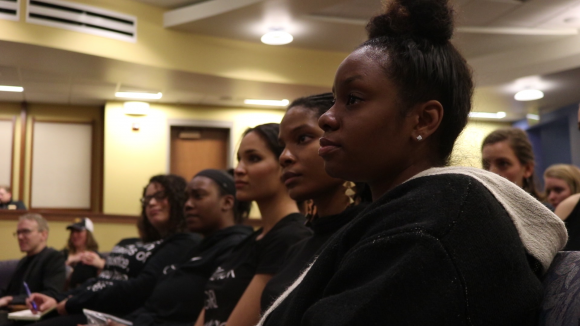 The Black Law Students Association (BLSA) organized a silent protest Wednesday during a presentation by controversial journalist Jason Riley. The Federalist Society for Law and Public Policy Studies initially invited Riley, a senior fellow at the American Institute as well as a Fox News contributor, to speak at the Law School.

Riley’s speech, “False Black Power? The Persistence of Racial Disparities Despite Black Political Clout,” focused on the political and economic state of African-Americans.

“We can’t keep blaming white people for black problems,” Riley said. “They must learn to do things for themselves.”

April Connally, the former president of BLSA and one of the organizers of the protest, strongly disagreed with Riley’s ideology.

“I think his views are dangerous to the black community,” Connally said. “He oversimplifies issues that plague the community and he uses the color of his skin to validate his opinion.” 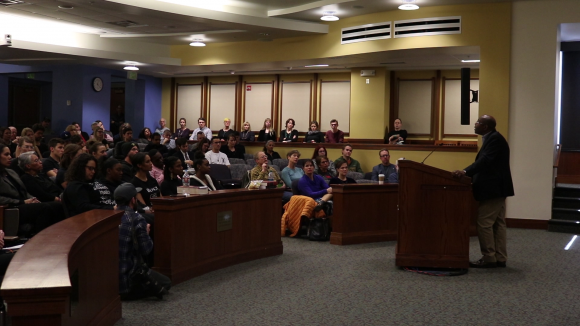 Jason Riley talks to a crowd of supporters and protesters at the CU Law School. Feb. 14, 2018. (Lucy Haggard/CU Independent)

The Federalist Society invited BLSA to co-sponsor Riley’s speech after organizing it, to which Connolly said they “respectfully declined.”

During the speech protestors sat and stood in silence dressed in all black. Connally said they “wanted to show their face here” to demonstrate that Riley’s views do not represent those of the rest of the black community or of CU’s law students in general.

Aretha Frazier, a member of the BLSA, said the group was there “primarily to be a presence.” While acknowledging that Riley was free to “express his views,” she noted that if the speech was “unchecked [it] would affirm the predominant white population [of Boulder] that we’re not having these conversations within our community. It would allow comfort.”

Riley reiterated throughout his speech the belief that “political activity is not the most successful way to advance a group economically.” He shared a variety of statistics such as a decrease in police shootings before saying “the idea of trigger happy cops gunning down young black men is a myth.”

Following Riley’s speech, Associate Professor of Law Scott Skinner-Thompson gave a rebuttal to Riley’s points. Skinner argued that this was a complex issue ranging from cultural to economic and political, ingrained in the U.S. system.

Connally acknowledged the importance of allies on the CU Boulder campus, given that minority students are a small subset of the population. The Law School’s fall 2017 entering class was only diverse by 29 percent, according to its website, which does not specify diversity subcategories.

“There’s not a lot of minorities here on campus, especially within the law school,” Connally said. “But that’s what you find here. You have people of all colors, professors of all colors and we trust them and respect them to speak on our behalf.” 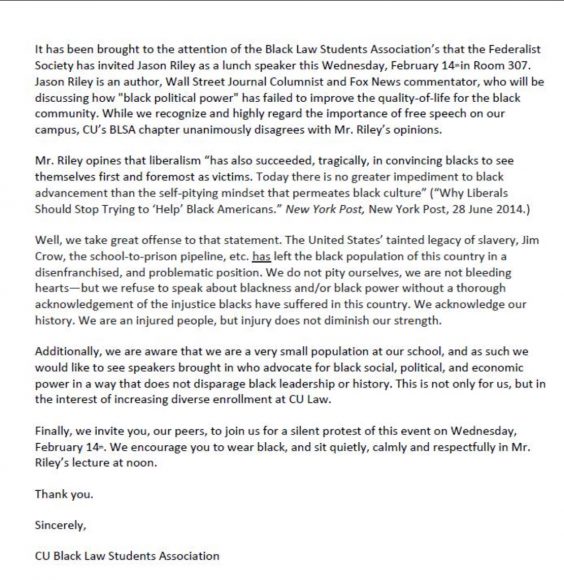 The letter published on CU Law School Facebook pages to notify students and faculty of the intention of BLSA’s protest. (Courtesy of April Connally)

Colorado’s deadly gun violence, as told by its victims