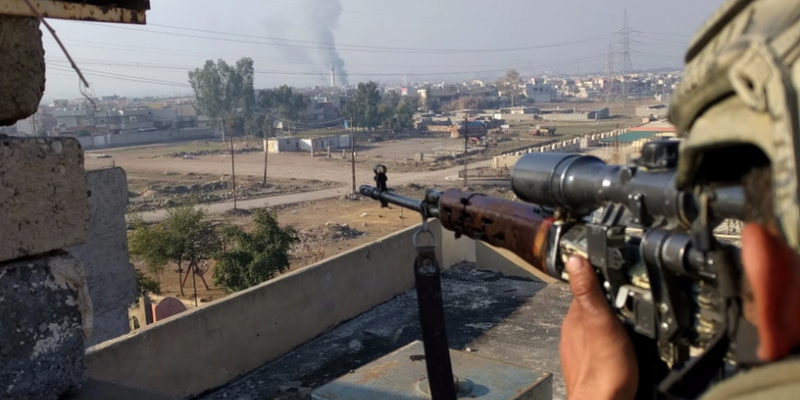 Blue showcased a selection of his photos, many of which were published in the New Yorker story on the conflict, and explained the stories behind them. Utterback, an army veteran and CU grad alum, showed the photos and videos that he created for his final project when he was getting his master’s in journalism at CU.

While in Iraq, Blue followed the Mosul SWAT team. His photos depict the members of the SWAT team in different living and combat situations. Blue said that his aim was to give the characters in his photos a personal story. He also hoped to make people in the U.S. care about the people he photographed through his work.

“You reach a level of intimacy and a level of understanding with the people you’re photographing, where you kind of become transparent and you’re in their lives and you can bring readers into their lives with you and their people they’ll never meet,” Blue said.

“The thing that you work towards is being where you know that you are in the middle of it. History is happening, things are happening, history is being made right now,” said Blue.

Utterback’s presentation included photos and videos that he created for an MA class assignment. Utterback, a retired U.S. Army Special Forces Lieutenant Colonel, knew several soldiers there whom he advised 10 years prior while on assignment.

“The news doesn’t show you the brutality of ISIS against families and children,” Utterback said.

Utterback’s photos focused not only on combat situations but on the citizens of Iraq. He showed photos of children holding up two fingers, the symbol for victory. He also showed children holding onto soldiers who had saved them.

Utterback and Blue both brought up the importance of transparency as journalists. Utterback showed a photo of Iraqi soldiers dealing with an ISIS war criminal. He took the photo while no one was watching and said that he would’ve taken the picture if they were harming the man. However, he was glad they treated the prisoner as he’d advised them to ten years before.

Blue seconded this, adding that he would’ve taken pictures regardless of how the Iraqi soldiers behaved. His job, he said, is to give his readers information that they can make decisions with.

Blue spoke about honesty in both the pre-event interview and during his presentation. The difficulties of inserting yourself into intense and dangerous situations in order to get coverage were also discussed.

“The hardest thing is figuring out how to navigate it in an honest way. My loyalty is to my readers first,” Blue said.