Transition from D2L to Canvas creates confusion among students 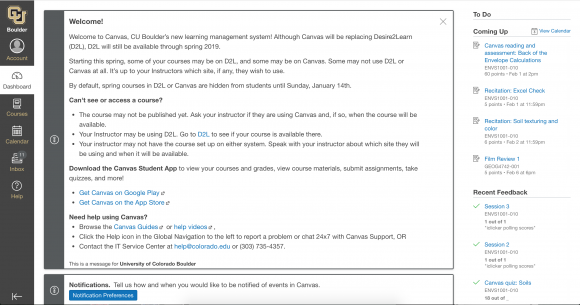 Correction: an earlier version of this article attributed information about the continuation of D2L to Aisha Jackson, the article has been updated to reflect that the information was obtained from a webpage which quoted Jackson, not from her directly.

Correction: an earlier version of this article states Kendra gale was a profession of Communications, she is an instructor of Advertising, Public Relations and Media Design.

The transition from Desire2Learn (D2L) to Canvas at the start of the spring semester has left both students and professors frustrated with the new platform.

In the fall of 2016, after a five-year relationship with D2L, CU’s students and faculty opted to evaluate the efficiency of the system. The following May, the university decided that the use of D2L was not widespread enough, with just over half of on-campus courses using D2L and many instructors using their own preferred learning management systems (LMS). Rather than encourage greater use of the existing system, administrators introduced another LMS, Canvas.

Advocates of Canvas rave about its ease of use. One media studies instructor, Professor Steven Frost, praises the system’s simplicity. Although he supervised CMCI’s D2L accounts last semester, he prefers Canvas because it’s more visual and has a “better flow.”

In Canvas, assignments are automatically added to student’s calendars, so students don’t have to search for assignments and deadlines. In the first three weeks of classes with Canvas, Frost has noticed a decline in missing assignments. The system also boasts smartphone apps for students and instructors, allowing them to see attendance notes and quiz responses in real-time. In its computer format, Canvas allows users to drag and drop files and add gifs.

Many students prefer Canvas but are frustrated with the need to learn to navigate a new system. Students are also bothered by the fact that not all courses have made the transition. One freshman APRD student, Helena Alex, is annoyed that half of her classes are on D2L and half are on Canvas.

“It would be a lot easier if [my classes] were all in the same place,” Alex said.

However, this limbo between D2L and Canvas isn’t the fault of professors. Transitioning between systems can be challenging for some instructors. Frost chose to switch from D2L to Canvas because he has a “student-focus” and acknowledges that it’s better to introduce a new system in a first semester class rather than later in students’ careers, but Frost is tech savvy.

Advertising, Public Relations and Media Design instructor Kendra Gale is attempting to minimize confusion by opting not to move to Canvas yet because her courses were designed with the D2L system in mind. Gale describes the process of transferring anything from D2L as a “clunky” process. She intends to make the transition this summer to avoid a mid-year learning curve.

“I just think it’s annoying that some professors use D2L and others use Canvas,” said sophomore astrophysics major Caelan Burke-Kaiser.

Not all instructors, however, will make the switch so soon. Students can expect another year with D2L, according to a webpage about the D2L to Canvas canvas transition. Despite the optimism surrounding Canvas, the Office of Information Technology understands the challenges of the transition and will support the Desire2Learn program through the spring of 2019.

To learn more about the transition from D2L to Canvas, students and faculty can visit the Desire2Learn to Canvas Migration website.