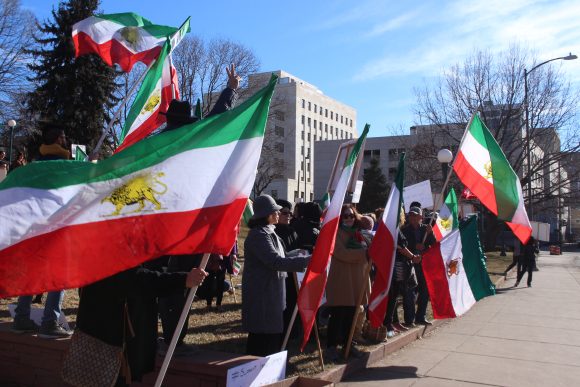 With chants like, “Secularism for Iran”, and “Down with dictator,” a crowd of roughly 150 people gathered Sunday at the capitol building in Denver to voice their support for Iranian protesters abroad. Similar protests occurred simultaneously in other American cities like Los Angeles, home to a large Iranian community.

Many are calling for an end to the country’s authoritarian theocracy, which has been in power since the 1979 Islamic Revolution.

This new wave of anti-regime protests began in Iran on Dec. 28 largely in response to extreme inflation and high unemployment. Over a quarter of young adults face unemployment, leaving many unable to cope with a surge in the price of basic items like eggs.

Iranians are also frustrated with many failed promises of the government and a misallocation of resources. The government budget of 2018— released to the public in an unprecedented display of transparency — revealed billions of dollars going towards religious foundations and causes outside of the country.

“They see all the funds, all the money being funneled to countries like those of Syria, Lebanon, to support terrorism, to have proxy war, while they’re suffering a lot of problems,” said Reza, a Denver local. Reza and others quoted in the article did not wish to give last names to avoid possible repercussions, should they decide to travel back to Iran.

These concerns have driven thousands of Iranians to the streets every night for the past three weeks. Protesters have been met with heavy opposition; roughly 8,000 demonstrators have been arrested and over 50 killed in prison.

Iran’s authoritarian government has a long history of suppressing uprisings and incurring human rights violations. During the protests in response to the 2009 election results, numerous protesters were tortured and killed while in custody.

Along with regular arrests, the government shut down the use of popular social media apps like Instagram and Telegram, which had been used to coordinate meetings for members of the movement.

Many Iranians in the U.S. find it essential to show their encouragement for those fighting back home.

“We’re simply supporting that movement. There are many, many political prisoners that have been taken in…and many deaths have occurred, so we are here to support them and ask for justice,” said Nushin, a resident of Westminster.

Local protesters also hope to convey a sense of urgency and call on the U.S. government to not turn a blind eye to the domestic concerns of a country whose situation some say it helped to create. Referring to U.S. involvement in the 1953 coup against the country’s democratically elected leader as a source of unwanted western intervention to protect oil interests.

President Trump supported the protesters in Iran in a tweet in late December.

Many reports of peaceful protests by Iranian citizens fed up with regime’s corruption & its squandering of the nation’s wealth to fund terrorism abroad. Iranian govt should respect their people’s rights, including right to express themselves. The world is watching! #IranProtests

While protests have died down across the U.S., anger in Iran continues, according to CNN. The #IranProtests tag on Twitter reveals images of the many who have been arrested or killed alongside footage of protests and supporters around the globe.