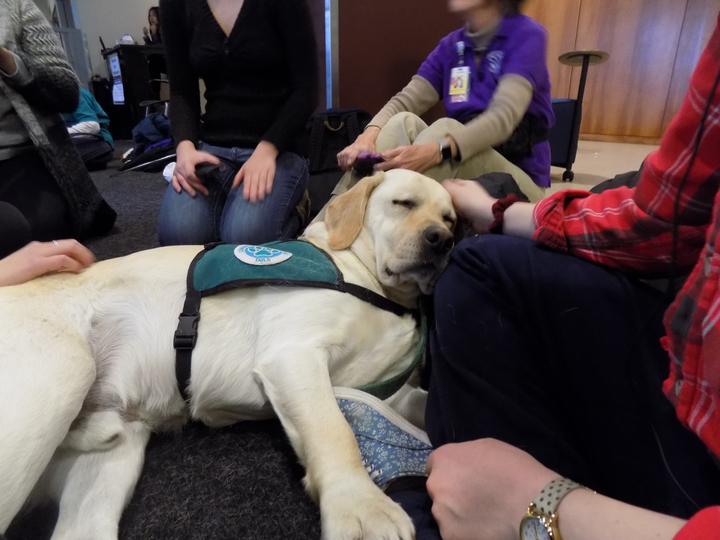 To combat exam season stress, libraries on campus partnered with Therapy Dogs of Boulder County to host Bark Buddies this past week. For two hours each day, groups of registered therapy dogs and their owners visited five libraries around campus to brighten the days of students, staff and passersby alike.

Bark Buddies came to a conclusion at Norlin Library on Thursday. Four therapy dog teams (each made up of a therapy dog and their handler) gathered just inside the east entrance of the library. Swarmed by students eager for a study break, the dogs were quickly lavished with pets and under-the-chin scratches.

Handler Kay Boyle and her dog, a fluffy white samoyed named Ivan, has volunteered with Therapy Dogs of Boulder County for about three years. Both were excited about being a part of Bark Buddies this year.

Other dogs present at the event on Thursday were Louie the black lab, Cooper the yellow lab and Charlie the goldendoodle. Other dogs came to the Bark Buddies events earlier in the week.

Students were excited to have the opportunity to interact with the dogs, whether they missed their dog at home or just wanted a fun way to relieve stress. Some students were drawn to the events from posters around campus while others joined the fun when they saw the group of students and dogs.

Freshman Abby McConnell was also excited to visit with the Bark Buddies.

“It’s really nice to be able to take a break and relax a little bit. It’s a good thing,” she said.

Bark Buddies is a popular event for students and volunteers alike. Bringing in dogs gives students a way to relax during one of the most stressful times of the year and the therapy dog teams enjoy it as well.