“Sport is a vehicle for social change”: Chris Mosier on transgender athletes 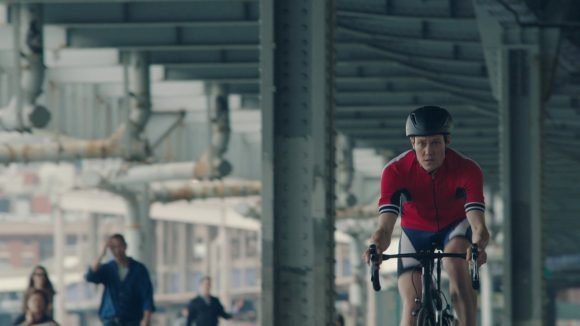 CU’s Conference on World Affairs hosted Chris Mosier, a Nike-sponsored triathlete and the first transgender athlete to make a US men’s national sports team, on Tuesday night. He spoke in Wolf Law about his experiences as a transgender triathlete and as an advocate for transgender rights.

Mosier was introduced and interviewed by Jake Hofheimer, a freshman student. During his junior year of high school Hofheimer became one of the first transgender men to play baseball on a varsity team.

When Hofheimer asked about Mosier’s background, Mosier responded that he’s been an athlete his whole life. His dream was to have his name on the back of a jersey. He joked that it was one of the main requirements in his college search, knowing his intention to play college basketball. However, Mosier knew he “didn’t want to be on a girls basketball team” so he abandoned the varsity track during college, opting instead for coed intramurals.

After competing in softball, volleyball and basketball throughout high school and various intramurals leagues in college, Mosier’s profession as a triathlete seemed to come out of nowhere. What turned him to triathlons was what he describes as a “mini-stroke” that afflicted him as a senior in college. Coming out of recovery, he set a goal to race a 5k. All of his friends warned him against it since he couldn’t even run a mile at the time.

“The most motivating thing for me is when someone says ‘you can’t do that,’” Mosier said.

He raced 5ks and 10ks, working his way up to marathons. Running led him to cycling and swimming so that he could compete in triathlons. He even won his first competition. Mosier loved reconnecting with sport after the medical issue.

The triathlon’s position as an individual event allowed him to compete more comfortably than in a team setting. Mosier explained that he “didn’t want the obligation” of having to explain his identity to teammates; with triathlons he didn’t have that obligation. Another benefit of rekindling his relationship with sport is that it allowed him to alter his body that was still technically female. By broadening his shoulders and bulking up, Mosier became comfortable in his own body before fully transitioning.

The downside to triathlons pre-transition was swimming. It wasn’t the sport itself that was the issue but rather the dreaded locker rooms. Mosier described locker rooms as “a barrier” and a place where person becomes “hyper-aware of their own body.” This is a sentiment that Hofheimer shared growing up as a transgender athlete, where neither gender-specific locker room felt right.

Hofheimer asked how Mosier’s transition was in the context of competition. Mosier explained that it was “shockingly good” with only a few challenges. His teammates were accepting and supportive, informing themselves on transgender issues and correcting others when they used incorrect pronouns when addressing Mosier.

Even his competitors treated him with great respect. When Mosier won first place in a men’s race, the second place winner congratulated him. Later when that second place athlete found him on Facebook and read his bio, he was even more congratulatory, saying “keep it up.” Mosier describes that there has been “very good sportsmanship” all around due to the fact that so such dedication to a sport and the hours of training pro athletes put in automatically gains that athlete respect.

What drives Mosier to compete is the idea that he can be a model for other transgender athletes. He wants to be the person to inspire young athletes like Hofheimer, showing them that just because they’re different doesn’t mean they can’t compete. Thinking about the first triathlon he raced as a man, Mosier wished that there had been another transgender person competing so that he could’ve seen them and known that he wasn’t alone in it. Now he aspires to be that person for fellow transgender athletes.

Not only is Mosier inspiring in competition, but he’s using his experiences and his celebrity status for activism as well. Mosier acknowledges that his relatively easy transition into a straight man—often perceived as cisgender—gives him a great deal of privilege, which he uses to speak for unheard voices. He talked at great lengths about how hard it is for transgender women in sports. Olympic level competition requires at least one year of hormone therapy before a transgender woman can compete in women’s leagues.

Mosier also explained that there are restrictive policies in place to keep transgender women out of sports, as there’s a common but misguided fear that boys and men will pretend to be transgender females to dominate the competition in sports. Mosier found this ridiculous. “Being trans is hard enough,” he said, that no one is going to fake being transgender just to have a leg up in competition.

Discrimination isn’t only an issue for transgender professional athletes but kids as well. Mosier’s focus in activism is specifically on inclusion of transgender youth in sports. He explained that policies for transgender athletes in public schools varies state by state, but the best policies focus on the values gained from sports and allow athletes to compete with whatever gender they identify as.

One struggle with an unclear path to resolve is how non-binary athletes can participate in sports. Mosier works to create youth sports programs and teams that don’t separate based on gender, in hopes that these model programs could make their way into colleges. As for professional sports though, Mosier doesn’t know when or how they might accommodate non-binary and gender non-conforming athletes.

During Mosier’s Q&A session freshman Ciera Dykstra asked what cisgender allies can do to support their transgender peers. Mosier was elated by the question. After thanking Dykstra profusely for her question, Mosier answered that the main way cisgender friends can help is by educating themselves on the language used within the transgender community. For example, “transgender” is never to be used as a noun, always an adjective. He detailed a site, GLAAD.org, that describes the evolution of language and terminology surrounding the LGBTQ community, helping people understand what things are and aren’t okay to say. He also highlighted his own site, youcanplayproject.org, which teaches allies how to support transgender athletes.

It’s “not about creating ‘special accommodations’” Mosier said. It’s about teaching society “how to support people.”