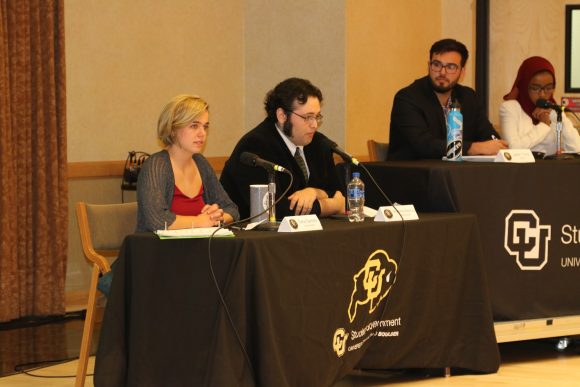 Candidates at the CUSG debate preparing to answer questions from the audience. Oct. 25, 2017 (Ruby Malamed/CU Independent)

A major responsibility for the legislative council is handling the school’s multimillion dollar budget. The council determines how the money will be allocated, mainly through student groups, community events and other campus resources.

Each candidate discussed what they think is the best way to handle students’ money. The Strive ticket emphasized the importance of considering the students when allocating funds and making sure the appropriate money is given to groups and resources.

Representatives from the Unite ticket stressed the importance of transparency countless times during the debate, stating the only way to allocate funds fairly is to do so transparently.

Tuma proposed a transparency bill to the council that if enacted, would make the CUSG’s decisions more open to the public. Though a similar bill has already been proposed and subsequently rejected by the council, Tuma stated that he would reach out to other members to convince them of the importance of the issue.

Dykstra advocated for funding resources and events that will help student life on campus. Dykstra emphasized the importance of giving students a real sense of community. The candidate stressed that CU Boulder is a large school that can often make students feel lost in the crowd.

Dykstra proposed creating more community events that will bring underrepresented groups on campus together to show them they have a community, stating that LGBTQ students are more than twice as likely to drop out than their peers.

Independent candidate Bheema Bactius advocated for cutting funds that cost students unnecessary amounts of money. Bactius stated that there are many “ridiculous” fees that could easily be cut, like a nearly $300 rec center fee for students who never use the facility.

Bactius claimed that these smaller cuts, along with reduced wasteful spending, will help fund more important resources on campus. Some resources would be better access to prescriptions at the Wardenburg Health Center or fair spending on student groups.

Candidates acted civil during the debate, with each ticket respectfully sharing their views and goals for the council’s future. All six candidates agreed on the importance of community involvement on campus and the topic of student involvement.

When asked which is more important between being transparent or engaging more students, every candidate agreed that both are essential for the success of the council.

“Transparency fosters community […] you cannot have one without the other,” Tuma said.

All candidates also agreed that communication between students and the CUSG is currently lacking. There are many resources on campus that students pay for but don’t know about, such as free tutoring and student groups.

Many candidates promised more office hours and direct involvement with groups and individuals, giving students a better sense of the resources available to them.

“CUSG is under the delusion that students are apathetic,” Bactius said. “Not me. CU Boulder students are incredibly passionate, you need to be passionate in order to go to college and make it past a couple of semesters.”

Students can cast their votes for five representatives-at-large from 8 a.m. on Monday, Oct. 30, until 8 p.m. on Thursday, Nov. 2. Voting can be done online through MyCUInfo or at polling stations at the UMC.

CUSG election winners could be disqualified after bribery and...