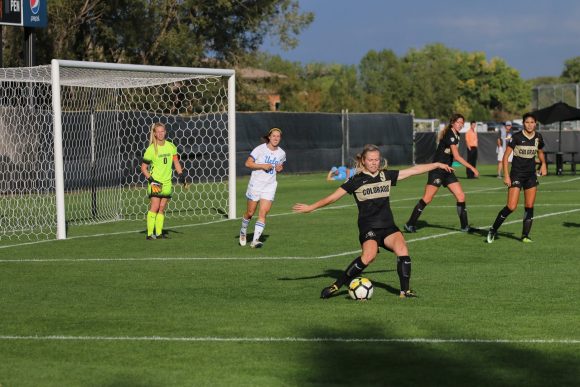 Defender Courtney Fedor clears the ball up the field in a game on Sept. 22, 2017. (Fiona Matson/CU Independent)

The Colorado Buffaloes women’s soccer team hosted the No. 2 Stanford Cardinal at Prentup Field in Boulder on Sunday.

Colorado got a boost before the game started in the form of Ralphie, who made her Prentup Field debut on Saturday.

But, not even Ralphie could propel the Buffs to victory, as the Cardinal dominated the game offensively. Given the recent offensive woes for Colorado, the Cardinal proved to be just the team capable of continuing those frustrations, despite an overall solid showing by the Buffs.

The Buffs, who now have been shutout in three straight games, have scored just two goals in their last five matches.

“I don’t really feel that we made any mistakes in the back [and] I thought we were competitive,” head coach Danny Sanchez said after the loss. “It was always going to be a challenge to get much going on the front end, but [in terms of the] big picture, we did probably as much as we could do today.”

The Cardinal managed a staggering 26 shots, eight of which registered for shots on goal. Conversely, the Buffs managed a lone shot on goal on six total shots.

The Buffs held Stanford, which this year has averaged 4.25 goals and over 25 shots per game, scoreless for the first half an hour of play before the Cardinal’s Civana Kuhlmann netted one at the 31:45 mark.

“We came out with a lot of energy,” junior midfielder Megan Massey said. “The whole first half [things] were pretty even. The first goal was unlucky on our part; we just didn’t step up all the way like we should have.”

In terms of offensive opportunities, it was slim pickings for Colorado on Saturday. The Buffs were unable to create much of anything in the offensive zone before halftime and after 45 minutes of play, the Cardinal led 1-0.

About 11 minutes into the second half, Stanford increased its lead thanks to a goal by Michelle Xiao.

“The second goal was a bit of a back breaker that early in the second half,” Sanchez said. “We needed them to get the game stretched a little bit.”

Just under 17 minutes later, Kuhlmann struck again and Stanford went up 3-0, all but sealing the fate of the Buffaloes.

Sophomore goalie JJ Tompkins made five saves on the day, while her fellow goaltender, junior Scout Watson, made one as well in her 24 minutes played after being subbed in midway through the second half.

Up next for Colorado is a road game versus Southern California. The Buffaloes and Trojans play on Friday, Oct. 13, at 5 p.m.