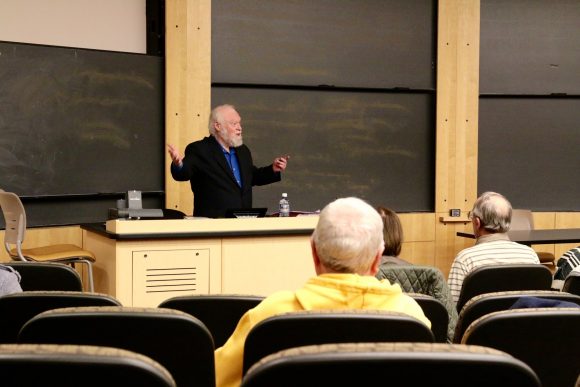 Jerry L. Martin spoke about the many religions and the existence of a god Tuesday night at Eaton Humanities.He discussed why, if there is only one god, there are many monotheistic and polytheistic religions. He was brought to campus by the CU Boulder philosophy department.

Martin, a former philosophy professor at CU Boulder, used examples of religious practices and texts to analyze the phrased question “why are there so many religions if there is only one god?” To explain this, he pointed out four main classifications of religion: exclusivist, inclusivist, pluralist and multifaceted.

He then spoke of his realization that almost all religions have the same goal at the lowest, or highest, level of divinity. He said that there are consistent factors to all, like being honest and truthful, for example. The differences in language, culture and practice between religions doesn’t mean as much. Some display religious statues like praying hands religious figurine in their homes, and some pray using rosaries.

“They’re more alike than they look… the function is very similar,” Martin said.

One hypothesis that he specifically referenced is differential access. He used the story of Blind Men and an Elephant as the analogy. It goes that some blind men examine an animal, give their perspectives of it and believe it to be completely different than the actual animal. Martin claims the same can be said for religions. They all see a smaller piece of the larger picture and therefore interpret it differently.

“The religions didn’t necessarily get it all right,” Martin said.

Martin also explored the question of why God didn’t reveal the whole story to everybody. He concluded with three possible answers. For one, each culture has particular resources and traits that make translation smooth. Second, the total revelation would be too much for a single culture to bear or act on. Lastly, he spoke of the thought that justice will not communicate with you. Justice is in one’s own voice and vocabulary, according to Martin, drawing on an individual’s own experiences.

To learn more on Martin’s thoughts and experiences, read his book, God: An Autobiography.