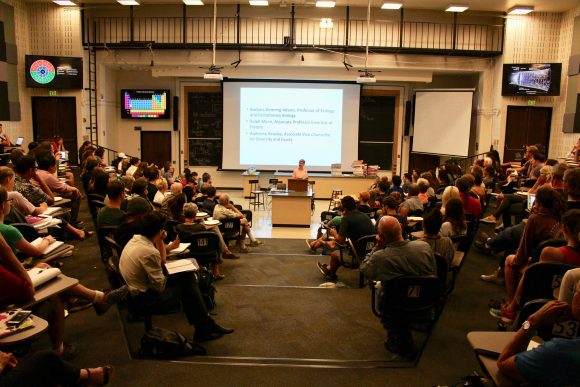 In response to the recent Charlottesville riots and attacks, CU’s history department arranged a panel Tuesday evening for faculty members to share their experiences dealing with white supremacy and fascism. A Q&A session with students and members of the public followed.

Barbara Demming-Adams, professor of ecology and evolutionary biology, shared her experiences growing up in post-World War II Germany, and how they shaped her perceptions of the current political climate. She also answered a question asked in a letter following a public statement she made in condemnation of the Charlottesville attacks: what makes someone a Nazi.

“I have learned that becoming a Nazi starts with focusing on what you’re told are the needs of your people, while being insensitive to the needs of other people,” Demming-Adams said.

She also addressed the importance of being aware of fascist rhetoric, which promises to restore safety and national pride, but only to a segment of the population.

She concluded by explaining how Germany has attempted to recover from parts of its history by accepting immigrants and investing in education and healthcare for its citizens.

“By investing in all people, you can actually grow the pie,” Demming-Adams said.

Panelist Alphonse Keasley, the associate vice chancellor for diversity and equity at CU, followed by sharing his experiences growing up as a black man in the south during the Civil Rights Movement.

He described the primal sense of fear he felt on a road trip with his white collgege professor during the 1960s. On this trip, during which they crossed the border into Mississippi, Keasley felt like his physical safety was in danger

“White supremacy was operating within me,” Keasley said.

The final panelist, Associate Professor of history Ralph Mann, described the experience of witnessing a Ku Klux Klan rally while he was in college. He noted that individuals at the rally spoke of feeling disenfranchised in various respects and directed their feelings towards who they were told was their enemy.

The history department plans to include similar panel sessions in the future on related topics, including memorials and memorialization, reconstruction and the rise of the KKK, and the rise of fascism in Nazi Germany.