Following a 3-2 road victory over Illinois last Saturday, the University of Colorado women’s volleyball team played host to the Xavier Musketeers at the Coors Events Center on Friday night.

The Buffs got to work early in the first set. Junior middle blocker Naghede Abu drew first blood for Colorado, scoring the match’s first point in the form of a kill after freshman setter/libero Brynna DeLuzio set her up.

DeLuzio then notched back to back aces for the Buffs and within a few minutes Colorado was up 7-2. But the Musketeers were far from demoralized. For most of the rest of the first set, Xavier hung around and stayed within three points of Colorado.

Around midway through the first set, with the Buffs’ lead having been reduced to just two points, junior outside hitter Alexa Smith scored a monster kill, sending a rocket of a ball to the Musketeers side of the court. It was the second of Colorado’s fourth consecutive points in the set.

Smith finished the opening set tied for the team lead in kills with six, a number shared by fellow junior outside hitter Frankie Shebby. DeLuzio led the squad with five digs.

The second set saw CU go up 7-2 early on once again, but as was the case in set one, the Musketeers rallied. After trailing by as much as seven, Xavier buckled down and stole the set in the final few minutes, eventually winning with the largest score differential of the game.

“[The Musketeers] play a certain style of volleyball that is designed to create a little chaos,” said head coach Jesse Mahoney. “By set two, when we were up, I think we took our foot off the gas a little bit. [Xavier] is a very good team. System-wise and defensively I thought they were excellent.”

Set three was a nailbiter. The Buffs and Musketeers stayed neck and neck until the set-winning kill from Smith. Shebby was phenomenal. Following an ace by defensive specialist/libero Gabby Carta-Samuels and with the score tied 8-8, she took a feed from DeLuzio and scored a kill for the Buffaloes.

Carta-Samuels sported an iced knee after game and for good reason; her 16 digs led the team. Smith and DeLuzio tied for second with 15 digs apiece.

Later in the set, Shebby made an impressive read on a serve from Xavier’s Kristen Massa, which went out of bounds by less than a foot. The error brought Colorado back within one, but the Buffaloes still trailed 18-17.

She went on to finish the game with a team-high 19 kills, while also managing 10 digs.

Things got tense as both teams raced towards that decisive 25th point. Shebby was guilty of a attack error late in the set, which tied the game at 22. But thankfully, the Buffs stayed cool and scored the three final points of the game, thanks to two kills by senior opposite Joslyn Hayes and one from Smith.

DeLuzio was the glue that held things together for Colorado, as she registered 55 assists and was crucial in anchoring the Buffaloes’ passing game.

“Having a setter that can spread out the offense is huge,” Hayes said. “being able to spread the offense to everybody allows us to share the load.”

Mahoney argued that the turning point in the game came in that close third set, but the Buffs absolutely shook up things and controlled the tempo in the fourth and final set of the game.

The Buffaloes began the set in a somewhat sluggish manner, going down 4-1 in the opening minutes. But after that, Colorado began to heat up and the Musketeers matched them. The two teams traded points back and forth for much of the middle of the set, with both squads failing to establish a lead of more than two points.

Things changed late. After Xavier was charged with a serving error, the Buffs took a 19-17 lead, which was quickly increased thanks to solid kills from Smith and senior middle blocker Anna Pfefferle. Like a flick of a switch, Colorado managed to shut down the Musketeers’ offense, which managed just one more point after what turned out to be a momentum-shifting serving error.

With a comfortable 24-18 lead, an attack error by Xavier gave the Buffs point number 25, the set win and the game.

Smith was next behind Shebby in kills with 16, followed by Hayes’ 11. Pfefferle added eight kills to the winning effort.

Up next for the Buffaloes is a trip north to Fort Collins, where the team has a double header this Saturday. Colorado takes on Albany at Moby Arena at 11 a.m. MST and later on will face the No. 22 Colorado State Rams at 7 p.m. 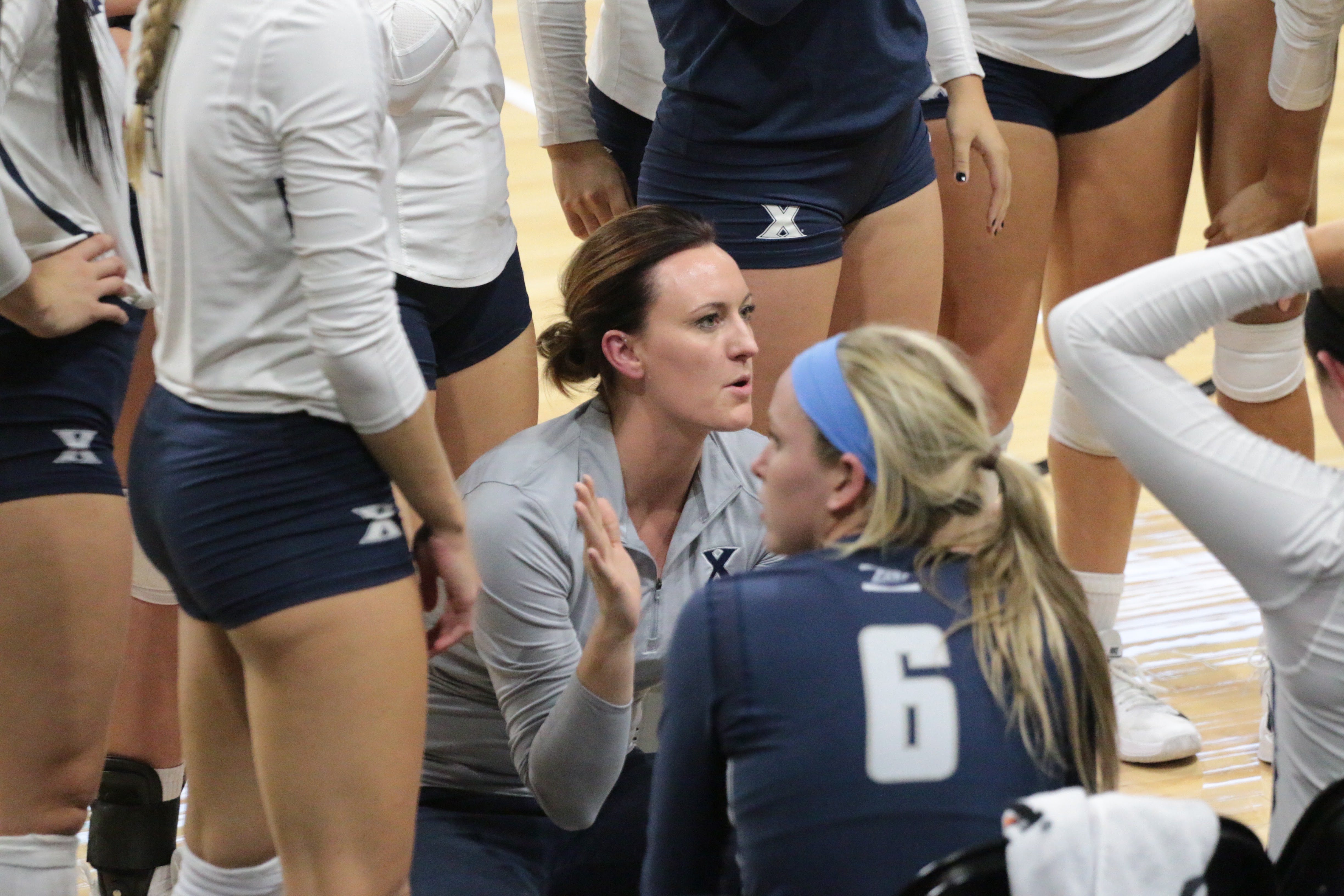 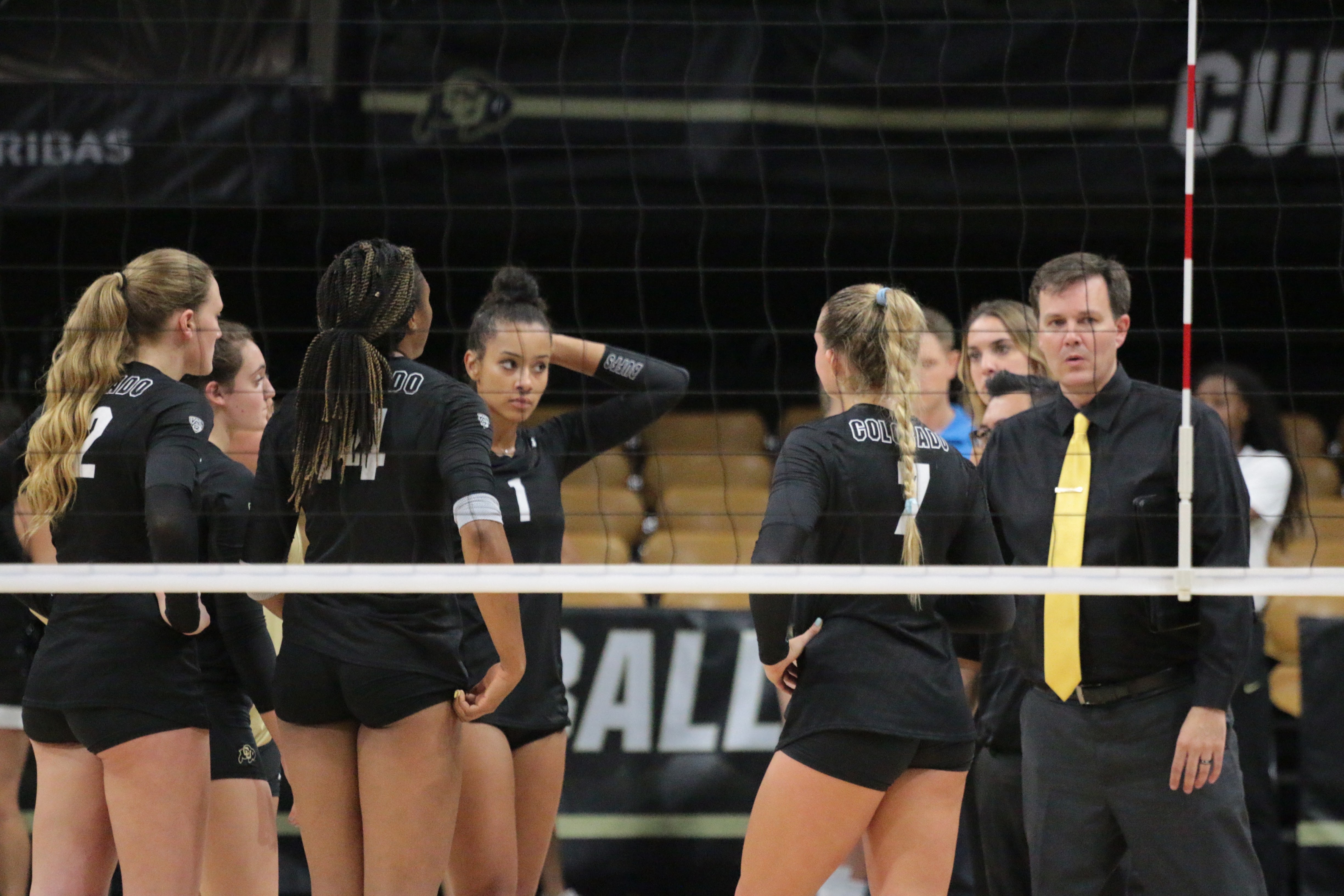 The Buffs and head coach Jesse Mahoney during a time out. Sept. 15, 2017 (Angela Smith/CU Independent) 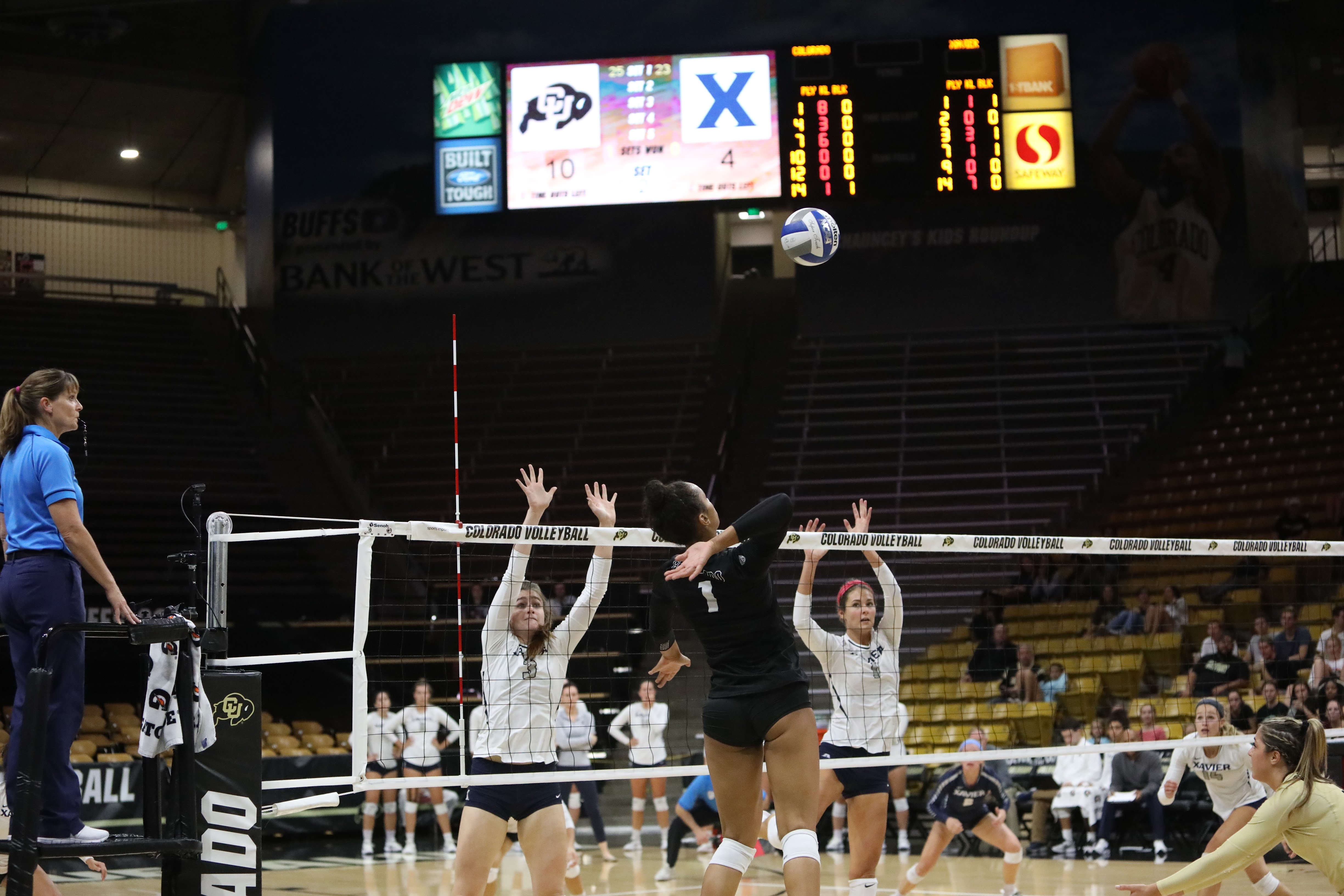 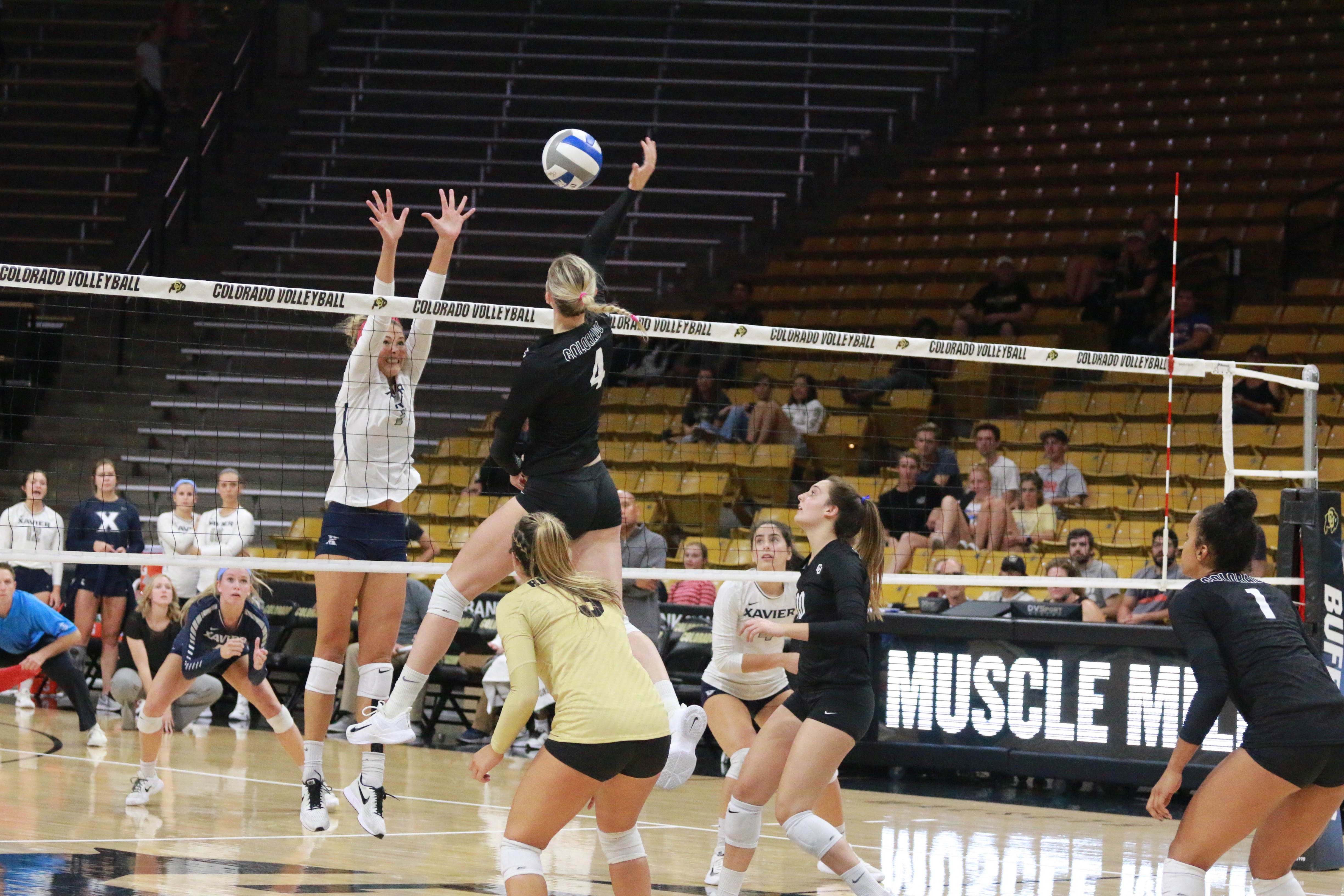 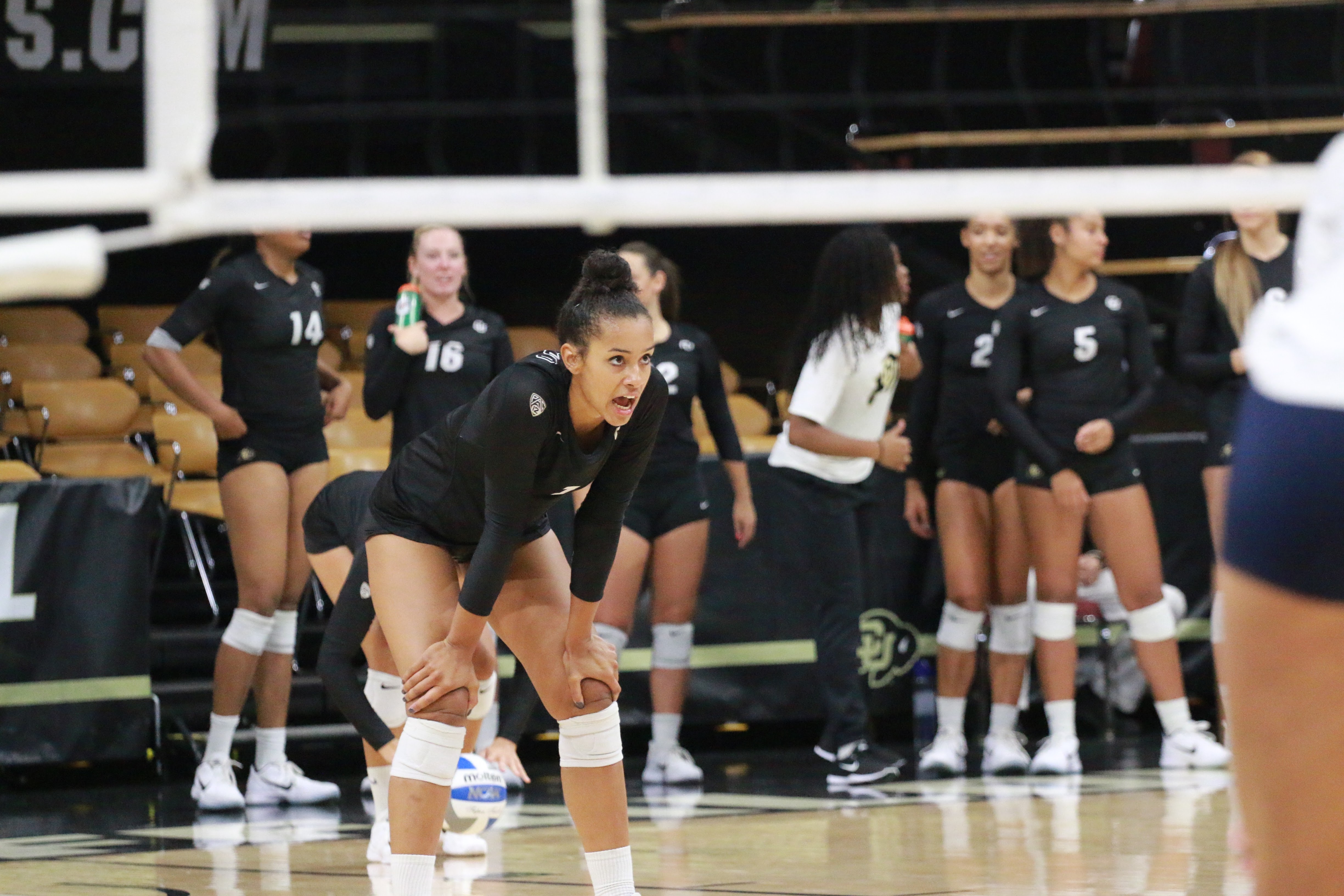 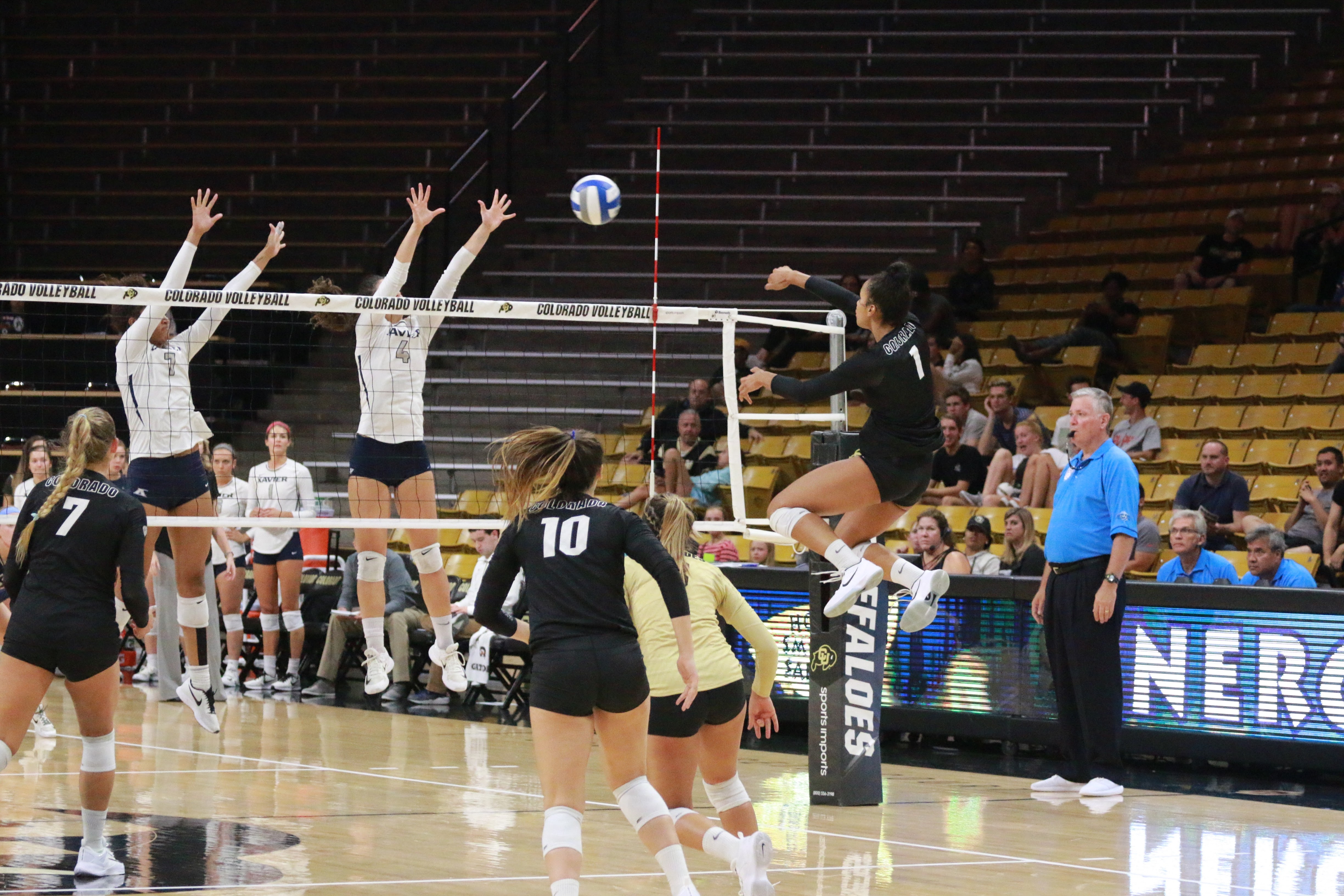 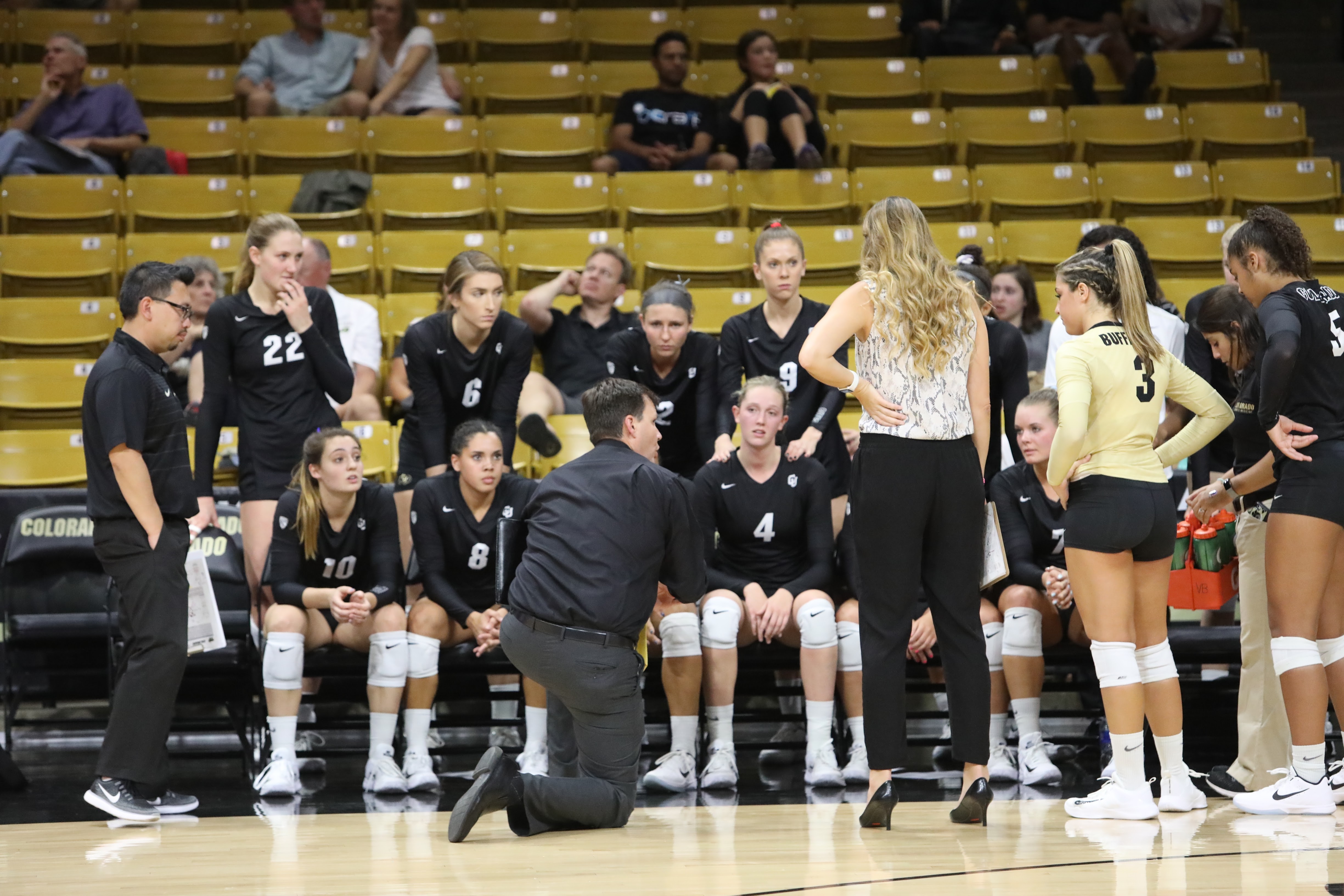 Coach Mahoney talks to the team during a timeout. Sept 15, 2017 (Spencer Pierson/CU Independent) 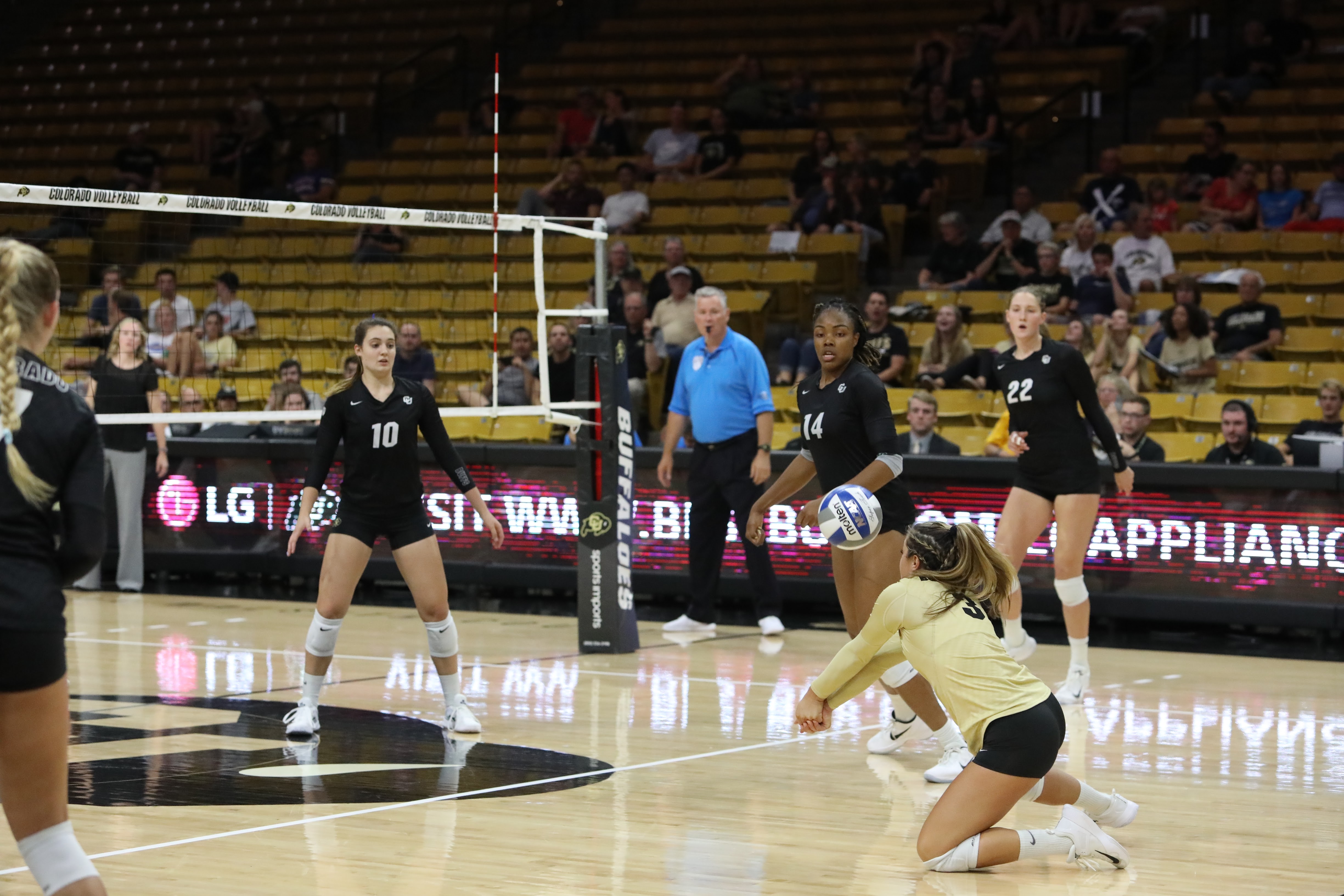 Gabby Samuels drops to a knee for a bump. Sept. 15, 2017 (Spencer Pierson/CU Independent) 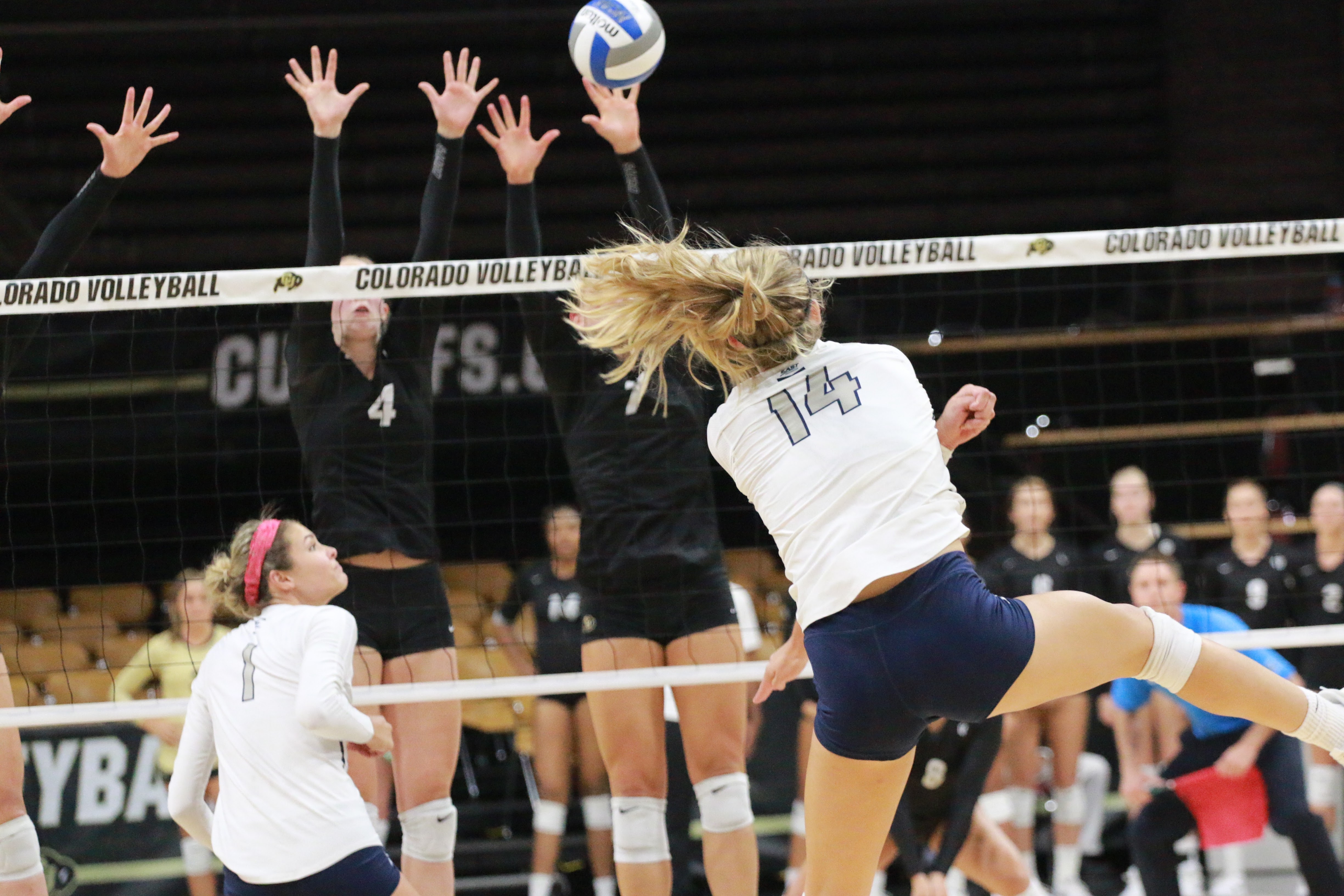