Reflecting on the first year of virtual reality gaming

April 5th marks the one year anniversary of the release of the HTC Vive, arguably the most advanced virtual reality (VR) headset of its kind. Though true virtual reality is still a lofty goal for the future, the Vive already very provides an incredible step towards the future.

Now, a year has passed, and the initial hype surrounding the Vive has petered out. Since then, the technology has gotten the chance to fully immerse itself in the gaming community and vice-versa. Everyday new games and experiences are being developed for this budding platform so you can find amazing new titles at websites such as  แจ็คพอตสล็อตออนไลน์ที่ใหญ่ที่สุดของไทย 2022. So many so, that I find it impossible to spend the time and money required to truly test the limits of this technology and the creativity of the developers pouring their hearts into these incredible experiences.

From the moment I first put on the headset, I found myself in a world that you really have to see to believe. I say that because before I owned one for myself, I watched all of the tech demos, let’s plays and Vive game releases that I could find. So, when I finally had the chance to strap the headset on, I thought I knew what to expect. I immediately realized that it wasn’t like anything I had ever experienced before. To explain VR to someone who hasn’t gotten the chance to try it for themselves is difficult. It’s like taking someone who has only ever seen a football game on television, to sit in a stadium and watch the game from the front row.

The best part about the HTC Vive is just how right it immediately feels. Your mind and body adjust to it as soon as you put it on, and all your reservations about VR fall away as soon as you start using it. 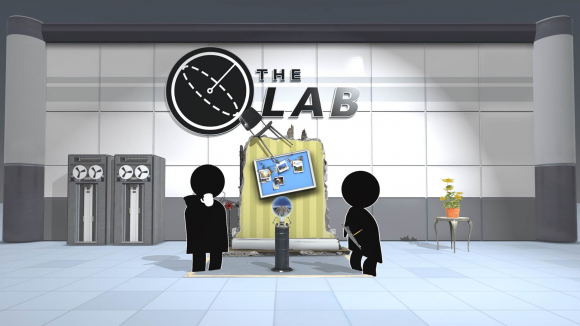 When it was released, the Vive was launched with a couple of games to kickstart the platform. My favorite of which was The Lab. It was developed by Valve Software and was free to play for anyone who owned a Vive. This game is essentially a well refined tech demo to show off some of the potential for the Vive and its functionality. The game consists of a couple of simple, yet addictively fun, games, as well as short virtual narratives to explore. While all of them are fun, the archery game is by far and away my favorite. The game is simple, you have a castle, a bow and a gate and these stylized little guys armed with spears and shields want to break down your gate and take your castle. Bow’n arrow in hand, you fend off wave after wave until the castle falls. What makes this game so fun is just how accurate it all feels and plays. The controls are so precise that tilting your hand just a few degrees can make all the difference for your arrow to hit its mark. This was the first game I really enjoyed, but little did I know that I was barely scratching the surface of the games at my fingertips.

Another amazing free to play title that I had enormous amounts of fun both playing, and watching others play, was Accounting. The name of the game is pretty innocuous, but when I heard it was being developed in part by Squanchtendo, (The game development company from the creators of Rick and Morty) I couldn’t resist giving it a try. It becomes clear almost immediately that the game was written by Dan Harmon and Justin Roiland, with the latter lending his voice to a couple of the inane and ridiculous characters you interact with throughout your venture into VR accounting. It is a must see for fans Rick & Morty, as it is steeped in the same kind of eccentric and meta humor we have come to expect. Although the experience is relatively short, taking about 10 minutes to complete, you spend it almost entirely laughing your ass off as you venture deeper into this bizarre world. What really made this game great for me was just how much fun I had watching anyone willing to play it bungle their way though as I had.

One of the major genres that has emerged in VR games has been first person shooters. The most common of which are the defensive wave based shooters. I have a few in my games library, but one stands above the others, Raw Data. The game is set in Neo-Shinjuku – 2271, and you play as an elite agent tasked with infiltrating the Eden Corporation, which just so happens to essentially control the world. The game’s plot is heavily reminiscent of the film I, Robot. You are tasked with fighting off wave after wave of elite robot soldiers sent to stop you from revealing the deepest darkest secrets of their corporation. Although the plot of the game isn’t groundbreaking, the gameplay more than makes up for it. The graphics are incredible compared to other VR titles, and the futuristic sci-fi setting of the world is gorgeous and interesting. The combat works surprisingly well and you are not short on ways to shoot, mangle, or slash your way through hordes of robotic combatants marching toward you. The only complaint I have is that so far each mission is about the same, defend thing, kill robots and get the data. This is a problem that almost all of the games in this genre experience however. The developers of this game have taken it a step further though. To break up the monotony they encouraging you to go online and join up with others. The main draw Raw Data is that it really makes you feel like the protagonist of a dystopian cyberpunk film, and that was awesome.

Recently however, one game has absolutely captured my attention in a creative and beautiful way. This is Tilt Brush, by Google. Tilt brush is an incredible leap forward for the realization of your creative imagination. It takes art off of the canvas and allows you to bring your ideas to life out of the thin air right in front of your face. The ability to draw in the three dimensions is immediately awe inspiring. I soon realized that I could sweep across the sky with my hands and a rainbow would cascade forth. Truly the scope of my imagination was my only restraint.

Apart from being an incredible creative tool, the design of the software is what really makes Tilt Brush such a pleasant and impressive experience. The controls are so delightfully intuitive that even a six year old could master them in a matter of minutes. As I played around with the brushes and tools available I came to realize the extent of just how easy and fun it was to use. My girlfriend actually came into the room to ask if I alright since I was essentially raving about how every new feature I found was just that amazing. Tilt Brush is an absolute must have for anyone with a Vive.

This has been an amazing first year for VR. The experiences I am able to see through my very own eyes are continuously pushing the boundaries of what I that possible. I am only getting more and more excited for what the future holds for this reality we are crafting for ourselves.

Interview with Ben Wander: The game developer behind A...

Is ‘PlayerUnknown’s Battlegrounds’ worth your time?