Immigration rally puts forth message of acceptance and action

To University of Colorado students, Wednesday was just another day on campus, but there was a little extra buzz amongst the regular bustle. The Republican presidential candidates came to Boulder and debated in the Coors Events Center. Because of this massive event — and all of the controversy concerning community inclusion — students and Colorado residents responded by organizing protests and rallies.

On Farrand Field, the Colorado Latino community came together for the “My Country, My Vote” rally about immigration reform. Led by former Denver mayor Federico Pena, the rally addressed the negative, biased rhetoric toward immigrants from some of the GOP candidates. More importantly, it impressed upon people the weight and power of the Latino vote.

The schedule for the event consisted of a long list of speakers and performers.

Latino actor Esai Morales was perhaps the most famous speaker at the rally. Fans surrounded the self-described “actorvist” to take photos with their idol.

“I resent that people with the least amount of political power and voice are being scapegoated like it was the turn of the last century. They did to the Irish, Italians, Jews; wherever there is a community of outsiders, it’s easy for someone to pick on them, cause a huge controversy, and at the same time get hidden support from the hidden haters. And if you don’t answer, if you don’t push back against that, it goes uncontested. And it stays in the psyche of the entire nation. So it’s time to let the country know that we will defend each other as humans, as Americans, as Latinos, that’s what this is about. And don’t be angry, be active.” 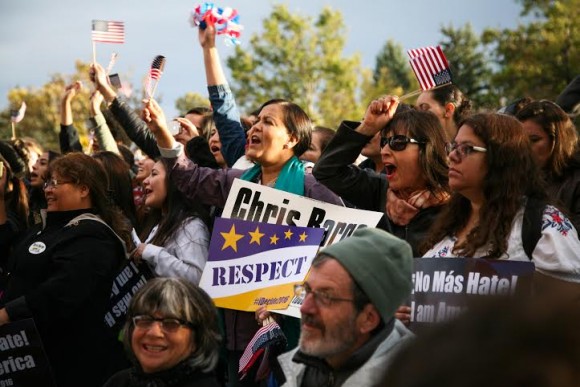 People cheer and shout during the speeches at the immigration rally on Farrand Field before the GOP debate in Boulder Wednesday night. (Danny Anderson/CU Independent)

Two CU graduates also stepped on stage to tell their story. Marco Dorado spoke in both English and Spanish, and talked about his family’s journey from Mexico to America in 1995 in search of a better life. His story echoes that of so many, in how he slowly realized the gravity of his undocumented status as he grew up in the United States.

Gemma Mendoza also spoke of the obstacles and fears she faced coming to the United States, not knowing the language or customs, and being confronted with fierce hatred and discrimination. Both of these students, however, stood on that stage today as a testament to the resilience of the Latino community, because they would not accept defeat, and they fought twice as hard to achieve their success.

The CU campus has an undeniably underrepresented minority population, as the vast majority of students are white Americans. Entering a climate like this was intimidating, even for these youths who had already jumped immense hurdles just to make it to college. As the speakers’ voices projected across the field, students were exposed to the passion flying from their mouths. 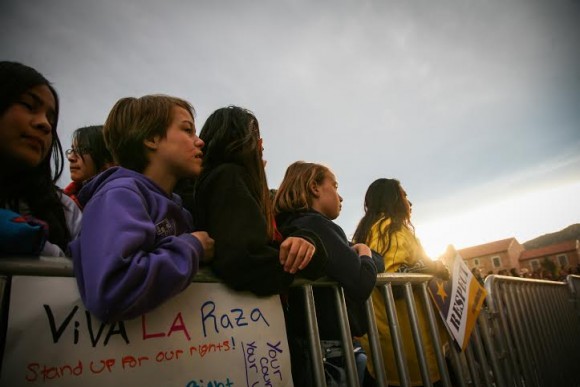 Even children were in attendence at the immigration rally on Farrand Field before the GOP debate in Boulder. (Danny Anderson/CU Independent)

Christina Longman, a junior at CU, joined the rally by saying the rhetoric about “being a better person and not spreading hate” made her stand in solidarity with the participants. Longman didn’t even know that the rally was happening until she happened to pass by, which just goes to show the vast opportunity for involvement this event has provided for CU students.

The rally also spoke to the strange disconnect the GOP seems to have with the Latino community. Donald Trump’s gross generalizations about Mexican immigrants spread like fire through mass media, and his comments were repeatedly condemned throughout the course of the rally. Evangelical speakers Venessa Guzman and Mark Kraakevick both spoke about the inhumanity of denying immigrants the basic human rights to life and liberty.

Although the rally anticipated a couple thousand attendees, and over nine hundred people RSVP’d, only about four hundred actually showed up. Of those who came, fifty of them registered to vote on site, which was the main goal of the rally. Even with such an unexpectedly small turnout, the rally projected the Latino voice across the university and into the political atmosphere.

The positive energy and togetherness expressed by the crowd reflected the success of the event. As the rally wrapped up, the speaker’s resounding voice reiterated, “The most important thing we can do is vote.” Even though everyone knows this already, it still takes an organized effort to push people to participate in democracy.