Coin Toss: Who is to blame for Colorado football’s struggles? 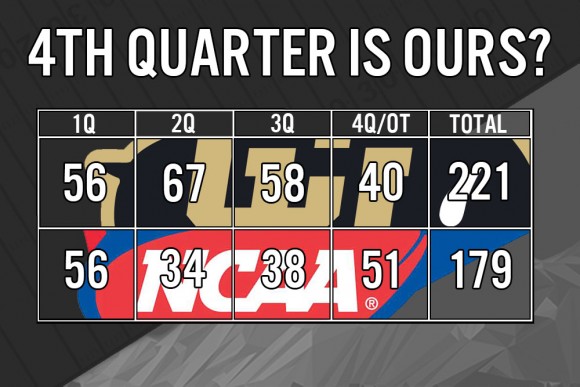 “Fourth quarter is ours” has been the mantra for the Buffs all season. The fourth quarter is the only quarter CU is being outscored in this season. (Matt Sisneros/CU Independent)

University of Colorado football got off to a decent start this season, but has lost its first three Pac-12 games, stretching the Buffs’ conference losing streak to 14 games over the past three seasons. Who’s at fault? Is it a players’ or coaching problem? The CUI debates:

Jared Funk-Breay: This is a players’ problem. They’re on the field. They should be making plays. This doesn’t seem that complicated to me.

Mike MacIntyre is a good coach. He succeeded at San Jose State. Of course, coaching in the Pac-12 isn’t quite the same as coaching in the WAC, and you could argue that Mac isn’t the greatest recruiter in the world, but that’s a whole different conversation.

When an offensive lineman misses a block, when a defender misses a tackle —which has happened way too often this year — can you blame that on the coaches? The coaches can’t do their jobs effectively if players can’t make basic plays.

Ultimately, it’s the players’ responsibilities to go out there and win. Coaches can prepare the team as much as they can, but it doesn’t make a difference if players perform poorly.

The Colorado State game was a prime example of the players just getting it done. Coach Mac and company had very little to do with big plays, like quarterback Sefo Liufau’s long touchdown pass to Shay Fields, or Kenneth Olugbode’s pick six. We’re not seeing those big plays as consistently in this losing streak.

You cannot coach big plays and you cannot simply coach winning. I guess you could try, but that responsibility falls on the guys on the field not the guys with the headsets.

Justin Guerriero: I want to address this now. It’s irrefutable that player mistakes have been a factor in the Buffaloes’ struggles this season. But I think that ultimately, coaching mistakes have been the true issue for why this team can’t seem to win Pac-12 games.

Jared, I agree with you about Mac. I think he is a good coach. He’s genuine, inspiring, and I believe that he’ll lead the Buffs back into bowl games. But he’s not entirely innocent. He’s putting too much trust in his immediate subordinates, namely offensive coordinator Brian Lindgren.

Last week, the Buffs were so incredibly close to beating Arizona. MacIntyre had his elusive second Pac-12 victory in his hands, but Colorado lost 38-31. I’m aware the defense gave up 616 total yards of offense to the Wildcats. But Buffs lost that game because of offensive strategy.

Let’s revisit the third quarter of that game. The Buffs were up 24-17. The defense is holding. Colorado had a chance to deliver a potential knockout blow to the Wildcats by scoring any type of points. Then, in the most crucial part of the game, the offense stalled and punted on five consecutive drives.

I know there were some dumb penalties. I know Liufau missed some opportunities for big plays. But I can’t credit the player mistakes with fully costing the Buffs the game. Their offensive plays weren’t working. They didn’t make adjustments. That is why they lost to Arizona.

Sophomore tailback Phillip Lindsay rushed 23 times against the Wildcats. The amount of times that the 5-foot-8, 180-pound Lindsay ran the ball up the middle, expected to squirm past defensive linemen almost a foot taller than him, made me want to scream. That’s not what speedy guys like him specialize in. The Buffs need to utilize their weapons properly.

Look at junior tight end Sean Irwin for another example. Against Arizona, Irwin came up with a huge 47-yard catch in the third quarter by bullying his defender, securing the ball and forcing his way upfield. The Colorado offense in recent years has limited tight ends to primarily blocking. Liufau misses his fair share of opportunities to make plays downfield. His coaches should understand this firsthand. It seems that they don’t, because knowing Liufau, I would want every available short range option for him for those exact moments when he misses a look down the field.

Long story short — bad playcalling and structure has made the Buffs predictable on offense. Defenses know that they don’t have to worry about a tight end very often. They know that almost every single time Sefo lines up in the shotgun with Lindsay to his side, he’s most likely handing the ball off up the middle.

JFB: Fans have always loved to complain about playcalling. Sometimes rightly so, sometimes not. I don’t think you can criticize Lindsay running up the middle too much. If you can’t run up the middle you shouldn’t be a running back — that’s what they’re meant to do .

What are you supposed to do when nothing is working? Colorado’s offensive drought in the second half against Arizona exemplified this notion perfectly. Liufau couldn’t get anything going. Neither could the running backs, Lindsay or Patrick Carr. The offensive line didn’t help. You’re really going to blame playcalling for failing five straight drives? Sefo couldn’t complete one pass down the field. Lindsay or Carr couldn’t break one run.

It’s awfully convenient to blame the coaching staff and avoid the true problem that has been plaguing Colorado football for so long: the players just aren’t that good compared to the competition. The offensive line is a perfect example. It gets manhandled every conference game. How are coaches supposed to design any play if the line fails so consistently? Honestly, it’s actually quite impressive how many points CU has put up in Pac-12 games (24, 23 and 31), despite Sefo getting hammered and the lack of holes for running backs to run through.

The defensive side of the ball has been depleted with injuries, especially the linebackers. Addison Gillam is out for the year and Olugbode has missed significant time. This means you’re sending out backups. The losses of Olugbode and Gillam have the running defense utterly failing in Pac-12 play, giving up 361, 231 and 291 in its first three games.

There’s talent on this team. Is there enough to warrant better results from the coaches? I’m not sure. No one can be. But, if we’re going to blame someone, blame the players. They’ve had plenty of opportunities. If they would have taken advantage of them, we wouldn’t be having this conversation.

JG: I’m aware of the saying, “You can lead a horse to water, but you can’t make it drink.” I don’t think the coaches are doing a great job of leading the offense to the water — or in other words, the red zone. This team’s offensive woes weren’t limited to the Arizona game. Colorado could have and should have beaten Oregon, and it would have with better playcalling.

Let’s hop back in our time machine and look at that game. About halfway through the second quarter, the Buffs were up 17-14. Here are Colorado’s drive summaries from that point until the end of the game: punt, punt, punt, lost fumble, punt, touchdown, punt, punt. Final score: 41-24 Oregon. So that’s all the players’ faults?

It seems to me that Lindgren, Liufau, MacIntyre — whomever is calling the majority of these plays — thinks the Buffs are playing Nicholls State every week. I’ve got some bad news: this is the Pac-12, and predictability is a team’s worst enemy. The problem isn’t that the Buffs aren’t as talented as their Pac-12 competition, as you asserted earlier. If Liufau is getting sacked too much, put the tight end in the backfield for increased protection. If the cornerbacks are being burnt by opposing receivers, switch to a zone defense, compensate, make some type of change. This coaching staff has been incapable of making in-game adjustments this year. That’s the real issue here.

When the coaches can’t adjust, don’t blame the players for being victims of a bad game plan.