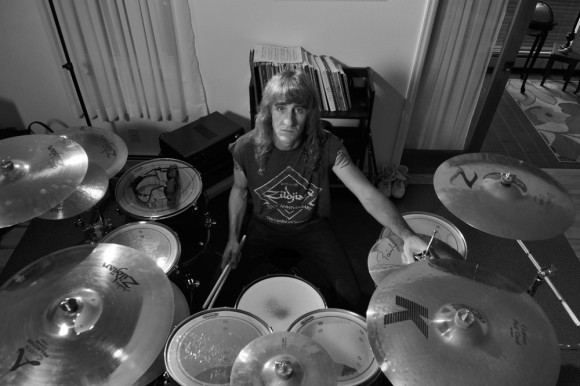 This October, Barnett plans on releasing yet another album with his latest band, Terminal Degree. The ensemble brings a progressive element to heavy metal with their inclusion of cellos and violins in place of guitars.

His eclectic musical interests are evidence of an extensive knowledge of music.

“If you came to look at my CD collection you would think that there must be eleven people that live here,” he said.

Growing up, Barnett watched Soul Train, attended various rock concerts, went to see the Nutcracker and also describes bluegrass music as one of his favorite genres.

Artists like Beethoven, Rush, Metallica, Pink Floyd and Prince have helped shape his passion for music. He also cites the rich music scene of the 70’s as being a huge influence on his desire to become a musician.

Barnett managed to make his way through the music scene, beginning his musical career with his tight knit band, Phantom Crew, and eventually branching out to his current project, Terminal Degree.

After struggling to find a heavy metal guitarist, Barnett decided to completely forget about guitar and record using string instruments instead. He talked to his former CU instructor and convinced him to join the project and later added a few other professors, as well as a couple of graduate students to complete the ensemble that he has today.

The entire band is comprised of musicians with not only talent, but extensive musical education as well. While Terminal Degree draws more of a heavy metal crowd, Barnett describes it as being progressive and musically challenging.

“It’s hard music. It’s impressive to witness that kind of musicianship,” he said of his band mates.

Still, even with highly skilled musicians, Terminal Degree has its obstacles. Because it’s comprised entirely of CU faculty and students, Barnett finds it challenging to get the entire band together since each band member has different things they’re committed to.

“All of it has difficulties, but I have a faith, or a belief, that everything will kind of fall in place how I need it to,” Barnett said. “So far that theory has proven solid. I’m really lucky.”

Fortunately, Barnett doesn’t have to worry about maintaining the interest of his classically trained bandmates. Avery Johnson, a grad student at CU and cello player for Terminal Degree, has found the unfamiliar genre to be surprisingly comfortable.

“I’m not familiar with metal music, but I have been playing electric guitar for years and grew up in a rocker family,” Johnson said. “In a lot of ways, it’s more my style than classical, but I don’t tell my cello professor that.”

Barnett doesn’t seem at all nervous for the album release. He believes each time he releases a new album he’s created his best work yet, and his positive thinking isn’t wavering in the midst of this release.

“I think this has the ingredients of being the best thing I’ve recorded so far,” he said.

Barnett plans on releasing the album this October. He’s looking forward to putting on an exciting show in CU’s own Black Box Theater in the Atlas building.