Eating disorders and self-image: An issue on college campuses 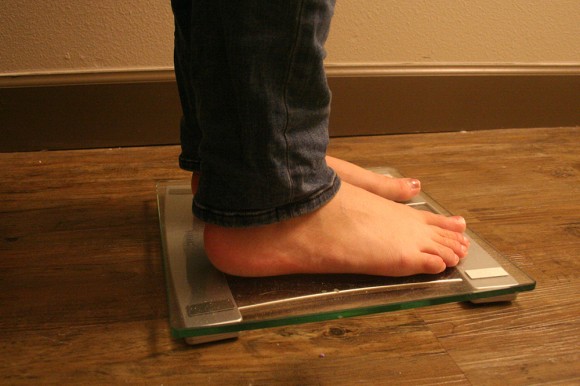 For individuals suffering from an eating disorder, obsessively checking their weight is a daily activity. (Alexandra Greenwood/CU Independent)

Editor’s note: last names have been withheld for anonymity.

The first thing Karolina did when she woke up was walk to the bathroom, step on the scale and hesitantly look down to see if she was one pound closer to achieving the “perfect” body she dreamed of having.

A freshman at the University of Colorado Denver, Karolina has been in a three-year battle with anorexia nervosa and bulimia nervosa, under-eating and over-exercising.

Karolina’s obsession with her physical appearance has dominated her life as a college student thus far. She is part of a demographic that is at a particularly high risk for developing these diseases. On-campus hospitals like CU-Boulder’s Wardenburg Health Center often have special treatment programs for the increasing numbers of students struggling with eating disorders. Clementine Twin Lakes for adolescent girls is a residential eating disorder treatment center. They can also accommodate patients who have this disorder.

Allie, a sophomore at CU-Boulder, has been in recovery for anorexia for several months now. She has to constantly remind herself that no matter how much she compares herself to other girls on campus, her body is different, and genetics are impossible to control.

“I came from San Antonio,” Allie said. “I never compared myself to people, because I was mostly thinner than them. It’s hard here, when you see a girl on the elliptical next to you who is significantly thinner or more toned. But it’s OK, because you have a different body type. I do definitely feel that girls compare themselves to other girls on campus.”

“The mean age of onset is between 17 and 25,” said Wardenburg Eating Disorder Treatment Coordinator Michael Maley. “People get to schools and feel they can’t fit in. Eating disorders have grown. Nationally, 2 percent of women have eating disorders, and at CU it’s 2-3 percent higher than the national average.”

Karolina moved to Colorado from Texas at 15, leaving behind her former life and best friends. Growing up with a family that did not support her in academics or sports, she struggled with her self-image.

“My eating disorder turned into a way of control, because so much of life was already being controlled by my parents,” Karolina said.

“People do not develop eating disorders in a bathroom all alone,” Maley said. “There is either a family member who has had one, or someone close telling them they don’t look good enough.”

Karolina struggled with her weight most of her childhood. Teased by her peers at school and her brothers at home, she worked hard in sports like track and basketball in an effort to be fit and healthy. With the move to Colorado, she was forced to give up participating in sports and fell into a depression.

“I started to restrict more,” she said. “I thought I was being healthy because I found these nutrition sites online about portion sizes and what to eat, but I didn’t realize I was losing so much weight until my mom took me to the doctor.”

During the interview, Karolina prepared lunch: a lettuce wrap filled with turkey, cheese and tomato, pop chips and apple slices with peanut butter.

“Less than a year ago, I only ate a couple of things in a day,” she said. “For breakfast, I would have one egg with orange juice. Lunch would consist of four nuts and a fourth of a protein bar, and for dinner I would have a few vegetables and a tiny piece of chicken, which I first soaked in a paper towel to squeeze out the grease.”

In high school, Karolina used sports as a motivator. Her parents told her she could participate in track as long as she gained weight and became healthy. But whenever she gained weight, she felt a familiar pang as she stepped on the scale.

“I also tried bulimia, and I kept that up for a little while,” she said. “Before making myself throw up, I said to myself that I needed to rid myself of the crap so I don’t get fat. I thought I was getting rid of impurities that could later screw up my body. But a lot of the time, I wasn’t really thinking, just doing, because the eating disorder took over my mind.”

In high school, Karolina lost so much weight that her health took a turn for the worse.

“I started having chest pains, so my mom took me to the doctor’s,” she said. “The doctor told us that my heart rate was really low, and my mom told her about my history with the eating disorders, so she suggested I go to the hospital. When I went to the hospital, they took my heart rate and it was so low that they admitted me.”

Karolina didn’t know if she would graduate from school that spring, and she worried about what others would think upon hearing why she was absent.

She was held in the hospital for over two weeks.

Doctors did not allow her to stand or walk for more than a short amount of time because her heart rate was so low.

“The doctors kept trying to find something wrong with me, like anxiety or depression, and wanted to give me medicine for it, but they could not find anything,” she said.

“The biology piece, we find things like people who have had a disorder like a sister or mom,” Maley said. “Psychologically, we find people who have had anorexia also have obsessive-compulsive disorder, or if they have bulimia they are also dealing with mood disorders or anxiety. And socially—family, media and culture.”

It wasn’t until Karolina saw how worried her friends were while she was in the hospital that she realized something needed to change. While watching her best friend break down hysterically, she finally realized what an effect her life had on the people that loved her. She began to understand that she needed to get healthy and get eating disorder treatment, not only for herself, but for the ones who loved her.

“I promised myself again that I would eat kind of normal portions and work out in a healthy way, and I did,” Karolina said.

She went back to school, slowly gaining weight at a normal rate and becoming stronger. She kept eating healthy, progressing through her senior year of high school as another year of track rounded the corner.

“I didn’t know that I was capable of achieving so much,” Karolina said. “I went to state for track because I changed my eating habits. I never thought I was good enough. I wanted to keep it up so more good things would come.”

Karolina finished the season and school year with a healthy mind and body, but she still has to remind herself constantly not to fall back into her old ways.

Now she is at a healthy weight, eating well and working out. She still fights a daily battle of self-image and her want to look perfect.

“I compared myself to other girls from school, in magazines, on TV and more,” Karolina said. “I wanted to be beautiful like they were. Today, I remind myself of everything I’ve gone through. I think about how close I was to dying, especially when my heart was so fragile and weak. You may think you are worthless but you need to find something to help you realize that you shouldn’t be putting all of your energy on losing weight because there is so much more you could be doing. It’s just a waste of time.”

Since coming to CU Denver, Karolina has realized how important it is to have a support network. She still struggles with falling back into her old routine of restricting food, the stress of her first year of college pushing her toward old habits. Karolina always consults her close friend when she is feeling overwhelmed or afraid she is losing weight again.

“I have a friend who reminds me that everything gets better as long as I try hard,” Karolina said. “I am no longer weighing myself every day. When you look at the scale, part of you wants to see the numbers decrease when they shouldn’t. If you are eating right and exercising right, there should be nothing to worry about.”