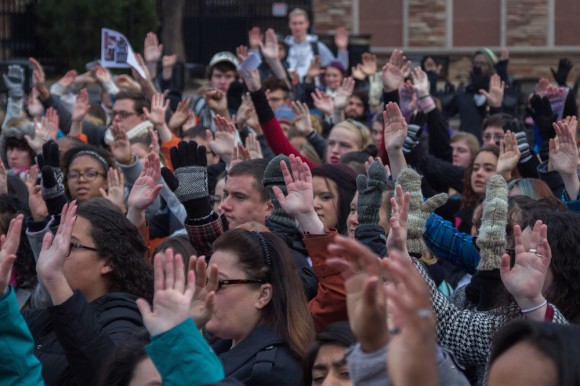 CU students and Boulder residents participate in a Ferguson protest with the “hands up, don’t shoot” pose at the UMC fountain at 11 a.m. on Dec 1, 2014. (Matt Sisneros/CU Independent)

More than 200 students gathered outside the UMC on Monday for a 4.5 minute silent protest of the recent grand jury decision not to indict Ferguson, Missouri police officer Darren Wilson for the killing of 18-year-old Michael Brown.

The 4.5 minute protest was symbolic of the 4.5 hours that Michael Brown laid on the ground after being shot by Wilson.

“As an African-American student here at CU Boulder, I’m tired,” said senior Paris Ferribee, who led the demonstration. “I want our voices to be heard.”

“Every day on this campus I know people who face the same injustice Mike Brown did, they’re just not dead yet,” said Ferribee. “Don’t let your voice be dead. Please, do something more; this movement requires action. It requires your voice, it requires your action and it requires blood, sweat and tears.”

“The message we want to convey today is that something pivotal happened in our history last week,” said Ferribee. “It cannot be kept quiet. Regardless of race, a man shot another man, and he got away with it. That’s not right.”

The protest ended with the crowd raising their arms in mock surrender and chanting, “Hands up, don’t shoot,” a chant that has become the slogan of protesters in solidarity with Michael Brown nationwide.

“Racism and prejudice still exist, and I think people are starting to realize that,” said Ferribee. “It doesn’t matter if you’re black, white, transgender, gay or whatever else you want to identify as. Injustice exists, and we need to do something about it.”