MDMA and the war against PTSD

A janitor knocks over a table in the University Memorial Center, and the sound of thick plastic against the hardwood floor echoes into the hallway where James, a 22-year-old freshman studying biology, sits. He smiles quietly to himself, staring off into space.

After this moment of reflection, he snaps back into the present.

“Before my treatment, that would have scared the shit out of me,” James says. “It would have put me right into a full-blown panic attack.”

In 2011 and 2012 James served as a combat medic in Southern Afghanistan, and for more than two years afterward struggled with Posttraumatic Stress Disorder.

PTSD, classified as an anxiety disorder by the National Institute of Mental Health, affects one in every seven service members returning from Iraq or Afghanistan. As a result, 22 of these men and women commit suicide every day.

Despite the consequences of the disorder, PTSD is heavily stigmatized in the military, viewed as a sign of weakness.

This kept James from admitting he struggled with PTSD, not wanting his combat brothers to see him as a coward. When he finally did come out and admit he had a problem with the disorder, his best friend from deployment, also a former combat medic, told him that he was a disgrace to the country. 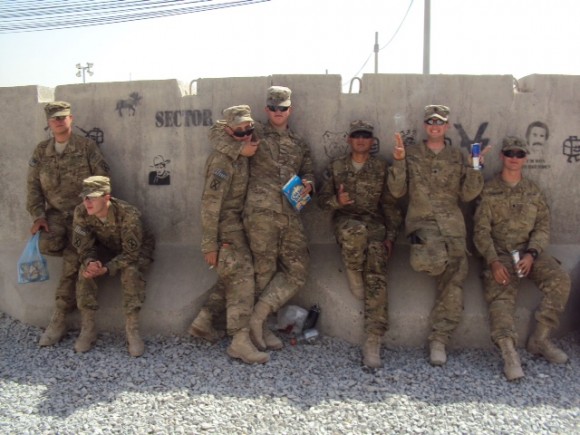 James and his friends wait for transport. (Photo Courtesy of James)

James describes PTSD as having had a wall built up around his heart — nothing got in and nothing came out. This was useful in Afghanistan, shielding him from an emotional breakdown every time the remnants of a friend or child were brought to his makeshift medical tent.

“As a medic, a lot happens,” he says. “You are treating little kids and your brothers in arms that have gotten blown up and shot. It’s a lot to deal with. You need to shut off your human emotions in those situations, because if they’re turned on, you won’t make it.”

“I had to sever the connection to my heart when I was deployed, but then I didn’t know how to come back home,” he says.

James says he didn’t feel human. He knew he should have been able to feel empathy and love, but he couldn’t do it — the only thing he could express was anger.

“It was really hard on my wife,” James says. “I knew I loved her. I knew it. But when I looked at her and tried to feel it, I just couldn’t.”

Before getting treatment for his PTSD, James tried to cope with the mental disorder on his own, hoping it would pass with time.

“When I got back from Afghanistan I bought a puppy, because I thought it would help,” he says. “I ended up choking her until her eyes would roll back in her head, and then let go. I would be hitting her on the ground and kicking her on the wall. I was a very scary guy.”

For two and a half years, Alex, James’ wife, couldn’t decipher what was going on in her husband’s head. He was anxious and angry, completely closed off.

“When he got back, he was like someone I didn’t know,” Alex says. “All the air vents in my car are broken, kicked and punched in. Living with him was like walking on eggshells all the time. He just couldn’t think things through and the only way he knew how to react was with anger. If everything didn’t go exactly his way, he was uncontrollable.”

Alex says that although she never felt unsafe around James, he was so volatile that she was always scared of what he would do next. She had to be highly aware of the things she said to him and how she said them, because even the slightest misplaced inflection could be mistaken for attitude and set him off.

“He was never physically abusive to me, but he broke a lot of things,” she says.

With his relationships falling apart, James finally decided to seek professional help. He went through every single treatment that the Department of Defense sponsors for PTSD, beginning with standard treatments — group therapy, medication and talking to psychologists one-on-one. When it all proved ineffective he turned to more unconventional approaches, like hypnosis, Eye Movement Desensitization and Reprocessing and even prolonged exposure therapy, which involves throwing PTSD patients into the very things that trigger their anxiety attacks. Nothing worked.

“I kind of lost hope. I thought everything would be lost,” James says. “But it’s hard to describe how I felt, because I really wasn’t feeling anything.”

After leaving the military, James discovered a study in Boulder sponsored by the Multidisciplinary Association for Psychedelic Studies (MAPS) that was testing the efficacy of a new drug in treating PTSD.

The drug was 3,4-methylenedioxymethamphetamine, or MDMA, known commonly by its street name, “Molly.”

Illegally purchased MDMA is usually cut with other drugs, like caffeine, cocaine and methamphetamine. These can cause an exacerbation of adverse side effects, like dehydration, nausea, seizures and overdose. The drug used in the MAPS study, however, was pure MDMA.

The treatment James underwent is called MDMA-assisted psychotherapy. Here’s how it works.

A psychiatrist gives the patient a dose of MDMA and asks them to put a blindfold on and lay down on a couch until the effects kick in.

During this time, the patient is talking with the psychiatrist about the intentions they have for the session, or what they want the session to accomplish. In James’ case, his intentions were to feel something for his wife and to overcome the extreme anger he’d been experiencing.

“A good way to describe it is that I felt like I was in a cave, trying to get out, but I didn’t have any light,” he says. “So I was just feeling around the walls, getting turned around, and getting even more lost. But with the MDMA sessions, it was like the therapist was my guide and the MDMA was a flashlight. With those resources, I could get out of the cave I’d been lost in for so long.”

The treatment consists of three psychotherapy sessions, each done in conjunction with a dose of MDMA, spaced several weeks apart. It is very structured, and a psychiatrist talks to the patient for the duration of the eight-hour session.

It’s important to emphasize that MDMA is not a treatment in itself, but rather a tool to be used alongside psychotherapy. James does not believe that the use of MDMA outside of a medical, professional setting would have done anything to help him.

“Usually people with treatment-resistant PTSD can’t get through it because the pain they are feeling [is] just too scary to deal with,” says Marcela Ot’alora, the principal investigator of the Boulder study. “There’s two ways that they deal with this on their own: they are either terrified and hyper-vigilant all the time, or they go completely numb.”

Ot’alora explains that MDMA deactivates a part of the amygdala, the brain’s emotional center, that produces fear, without deactivating the part that controls a person’s emotional response. PTSD patients are often highly defensive and fearful, as evidenced by James’ analogy of the wall around his heart. In treatment-resistant cases of PTSD, the patient is often afraid or unable to access and process through the fears and emotions that are causing their symptoms, even in therapeutic settings with the emotional support of a psychiatrist or group of individuals suffering from similar ailments.

“They can feel all the feelings they need to feel, and they won’t be afraid to deal with issues they’ve been afraid to process in the past,” Ot’alora says. “This is incredibly helpful in a psychotherapy, especially in cases of PTSD.”

Despite promising emerging research suggesting that MDMA could be an effective treatment option for anxiety disorders like PTSD, there is still plenty of taboo surroundings its use — it’s an infamous party drug.

The Boulder study receives no federal funding, due to the classification of MDMA as a Schedule I substance, putting the drug in the same category as heroin and bath salts. According to the Food and Drug Administration, MDMA has a “high potential for abuse and no currently accepted medical use.”

“It blew me away, how effective it was,” he says. “It was definitely the best treatment I’d ever had for my PTSD. It gave me my life back. It was like a burden being lifted off my back for the first time in years. I could feel. I could love. It helped me more than I can even put into words.”

The effectiveness of PTSD treatments is judged by something called the Clinician-Administered PTSD Scale (CAPS-5), a survey that measures the severity of symptoms. After months of taking a family of drugs that included Zoloft and Paxil, James’ CAPS-5 results determined that the severity of his PTSD had dropped by about 6 percent.

After three sessions of MDMA treatment, the severity of James’ PTSD dropped by 52 percent.

Alex explained that MDMA-assisted psychotherapy was not a miracle cure, but life with her husband has improved tremendously.

“It was like a complete 180,” she says. “Now he’s like a more mature version of the person he was before he ever had PTSD. There are still things he needs to work through, which is understandable, but I can talk to him again. He thinks things through. He can relate.”

The study James participated in was only a preliminary study. Although too few patients have been tested yet to prove that MDMA is definitively effective in treating PTSD, the results are promising.

In a pilot study conducted in South Carolina by MAPS in 2008, 83 percent of patients showed a clinical response to the treatment. After three and a half years, the researchers conducted a follow-up examination of the patients, finding that generally these results persisted over time.

Ot’alora says that if all goes according to plan, by 2021 MDMA-assisted psychotherapy will be an FDA-approved treatment option for PTSD.

James is careful to point out that the experience was not similar to rolling Molly at a concert; his little brother once asked him if he was giggling and trying to hug people for the entire therapy session.

“It was very professional,” James says. “It wasn’t fun. It was more like being at the doctor’s office for eight hours. There’s a lot of skepticism surrounding MDMA treatment in a medical setting — even my father and my wife were dead against the idea before I went through the treatment. I know it’s a party drug, but if my story isn’t enough to persuade you that this is a very effective treatment for PTSD, I urge you to look at the data, look at the results.”

Since going through MDMA-assisted psychotherapy, James has not shown any symptoms of PTSD.

“I still have that dog I used to beat,” he says. “Sometimes I’ll hold her head close to mine and just try to let her know how sorry I am for what I did to her, but I don’t know if the message will ever get through.”

James enrolled at CU this year and plans to go to medical school, where he would like to study neurology and psychedelic therapy research. He currently lives in Denver with his wife, his 11-week-old son and his dog, Dash. 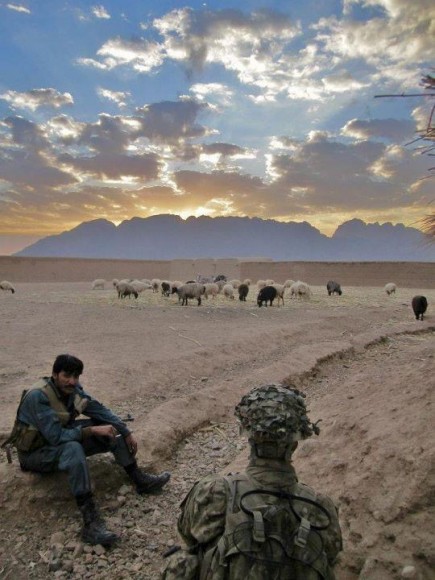 The sun sets over the Afghan mountains. (Photo courtesy of Zach Leadingham)