CU students behind the controls of NASA spacecraft 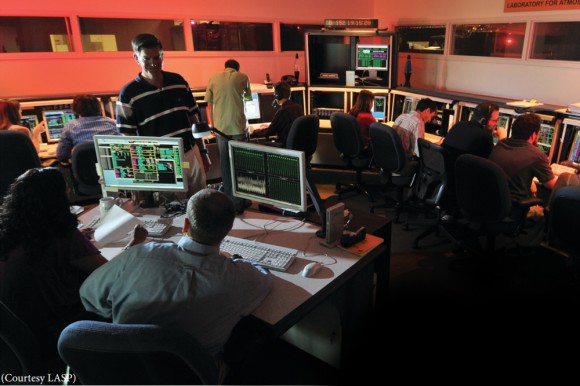 The amount of money invested in these four spacecraft totals approximately $1.5 billion.

John Stearns, an aerospace engineering senior, is a certified mission operator with MO&DS.

“The really cool thing to do is when we get to sit ‘on console,’ which is when we have real-time contact with the spacecraft,” Stearns said. “I also try to piece together any data trending going on that we get from the spacecraft, and try to explain any anomalous situations that come up.”

Of the four spacecraft controlled by MO&DS, the most notable is the Kepler mission, which is essentially a telescope that searches for “exoplanets,” planets outside of our solar system. Over the last three and a half years, MO&DS has been working together to maneuver the Kepler Space Observatory and has discovered hundreds of planets outside of the solar system, from icy and gaseous giants 18 times the size of Jupiter to rocky planets a tenth of the size of Earth.

In April, the Kepler mission discovered Kepler-186f, a terrestrial planet 500 lightyears away from Boulder that is about the size of Earth and is considered to be habitable, because it has the right temperature conditions for water to exist in liquid form at the surface.

Kepler-186f is the only known Earth-like planet to date, and was discovered with the help of CU undergrads.

The students hired as Mission Operators for MO&DS are typically sophomores and go through a 10-week training program during the summer.

“We train them on everything,” said MO&DS director Bill Possel. “We teach them everything they need to know —  what is an orbit, what is a spacecraft, all the way down to the most detailed parts of the spacecraft so that they really understand what they’re doing.”

This process is fully sanctioned by NASA, and although the students have received certification to operate spacecraft by MO&DS, there is still some professional surveillance of these undergraduates entrusted with more than one billion dollars’ worth of NASA equipment and technology.

“We always have two people that send commands to the spacecraft — the student that types the command and the professional that verifies it,” said Possel. “But still, that’s an awesome responsibility for a college student.”