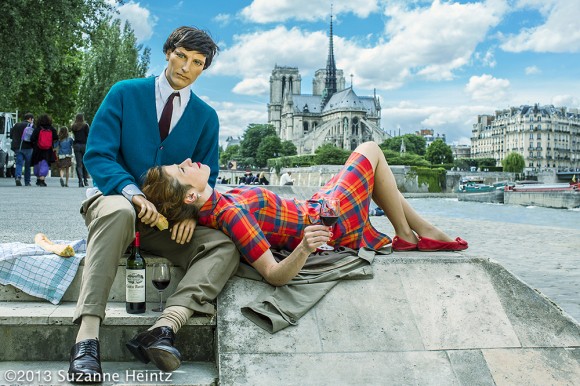 Suzanne Heintz uses her work as an example of how to make crazy ideas work. (Photo courtesy of Suzanne Heintz and suzanneheintz.com)

Not because of her booming voice that screams things like, “Death is coming and your country needs you!”

Not because of her red hair or her dark lipstick that pairs harmoniously with her fiery, larger-than-life personality.

Not because of her frequent and abrasive imitations of people asking her “why aren’t you married?” or “what are you going to do with that useless major?”

No, people cross the street to avoid Suzanne Heintz because of her family: a husband, Chauncey, and a beautiful daughter, Mary Margaret – who are both mannequins.

“Are you sure you want to listen to this?” Heintz asked her audience in an ATLAS lecture hall Wednesday as she lowered her 50-pound mannequin husband from her shoulders, accidentally popping his right arm off in the process.

“Hasn’t anybody told you I’m crazy?”

Some might say she is crazy, because for the last 14 years Heinz has been taking photographs with her mannequin family — ranging from everyday domestic scenes to a romantic picnic with Chauncey in front of Paris’ Notre Dame Cathedral.

Heintz, originally from Yonkers, N.Y., graduated from CU in 1987 and currently works “for the man,” as Art Director for the Starz network to fund her passion, which is something she describes as a combination of performance art, conceptual photography, social satire and mad science.

That passion most recently manifested itself in the short film “Playing House,” a documentary that humorously criticizes modern families and gender roles.

The film follows Suzanne and her family on a vacation to Paris, and premiered March 21 at the VOICES Women and Film Festival in Denver.

The focus of Heintz’s lecture on Wednesday was to ask a question she’d heard repeated by her friends’ mothers while growing up in Yonkers.

To pose this question, Heintz got into character by taking a long, noisy drag of an imaginary cigarette held between her fingers and asking in a gruff, bored New York accent, “Why botha?”

Her answer is that there is a “mad, short, little tyrant midget man” that inhabits our minds. “He’s the boogie-man, he knows where you live and he will hunt you down when you least expect it.”

This little midget man is a character invented by Heintz as a symbolic representation for what we are passionate about and what is truly important to us.

Heintz’s own little tyrant man wanted her to parade around with the mannequin family and take photographs, so that’s what she did.

“He is the driver, the engine, the vehicle that will take you where you are dreaming of going, as long as you feed him what he likes to eat and take him where he likes to go,” she said. “He knows what he wants, and you need to give it to him. Everybody is happy when the little tyrant is happy.”

While at CU, Heintz studied English and Fine Arts and faced constant questioning about why she chose such a useless field of study.

Throughout her lecture Heintz encouraged her audience to not fall victim to this sort of criticism because, “if that’s what your little tyrant man wants, give it to him.”

Without these people, Heintz said, “we’ll roll backwards in the pursuit of progress.”

“Of course she’s crazy, but in a good way,” said CU marketing student Emily Blomquist. “She’s definitely not everybody’s cup of tea, but I like what she’s doing.” 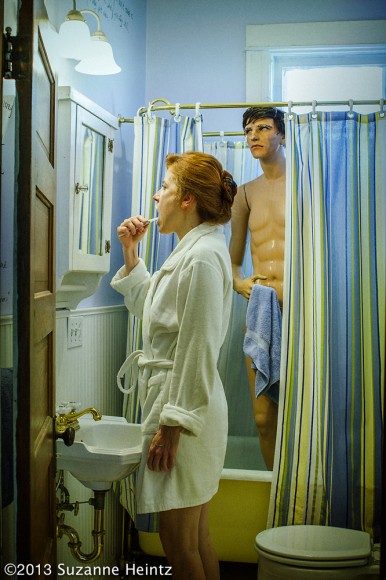