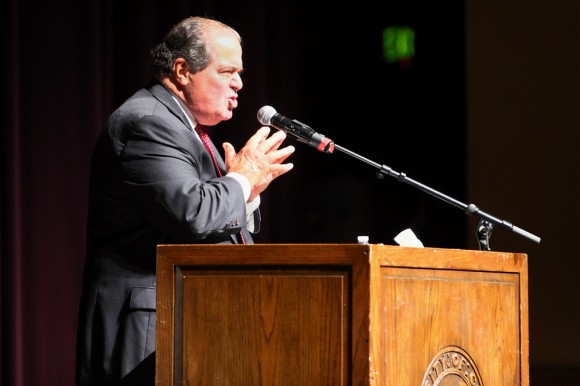 Associate Supreme Court Justice Antonin Scalia speaks passionately in opposition to the concept of the the “living Constitution” during the John Paul Stevens lecture series, hosted by the CU Law School, in Macky Auditorium on Wednesday. (Nigel Amstock/CU Independent)

Crowds gathered outside Macky Auditorium as early as 4:30 p.m., even though Scalia wasn’t due to speak until 5:30 p.m.

Scalia opened remarking he was honored to deliver the lecture even though John Paul Stevens would probably disagree with what Scalia was about to say.

Scalia came out staunchly against the concept of the “living Constitution,” as in an evolving body, saying the Constitution shouldn’t be reinterpreted, rather changed through laws.

“Normal people, when they read a text, they try to understand what it meant when it was written,” Scalia said. “The Constitution is not an organism. It’s a law. It’s a super law.”

The associate justice repeatedly named the death penalty as something that isn’t banned by the Constitution. But, he said, advocates of the “living Constitution” think it ought to be, consequently changing their interpretation of the Constitution to fit that opinion.

“What the American people voted for does not change,” Scalia said. “A felony used to be a crime punishable by death. That’s why we have Western movies.”

Scalia said the living Constitution will give people more rights, but it will also take away some.

He added the living Constitution is especially seductive for judges.

“How wonderful it is to never, never make a ruling on the Constitution that you personally disagree with,” Scalia said.

If the court continued to promote the living Constitution, he said, “at the end of the road is the destruction of democratic self-government.” And: “When you appoint people based on what they think the Constitution ought to be, you’ve destroyed the Constitution.”

Scalia said he thinks the living Constitution advocates will eventually win, but he will keep fighting until the bitter end.

“I feel like Frodo in (Lord of the Rings) and I’m going to get clobbered at the end,” Scalia said and added his job is to interpret text, not to decide rights issues, or decide the intent of the lawmakers.

But when there is no textual evidence for either side of an argument, Scalia said, “You have to take your best shot. Originalists can have fun too.”

Scalia captivated the audience during his lecture with a mix of dry humor and bombastic outbursts.

“I thought he was phenomenal,” said CU first-year law student Nick Trevino. “The guy can definitely grab the attention of a room.”

Scalia is the third Supreme Court justice or former justice to deliver the Stevens lecture at CU in the last three years. Sandra Day O’Connor spoke last year and Ruth Bader Ginsburg the year before.