Opinion: How we can try to prevent sinkholes 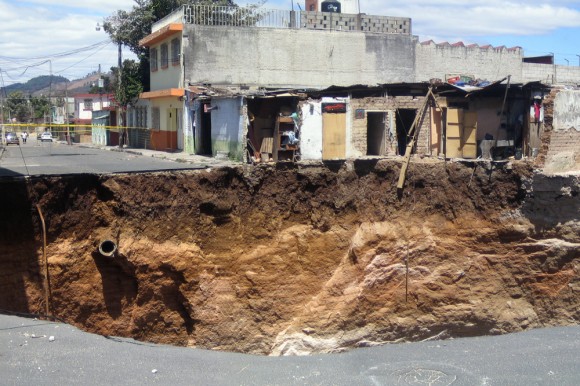 A sinkhole in the middle of Guatemala City in 2007. (Photo Courtesy of Eric Haddox/Wikimedia Commons)

I am a man with few legitimized fears.

The first time I saw Jurassic Park, I couldn’t face my kitchen for weeks, imagining a stray Velociraptor pinning me inside a cabinet. I refuse to fly in aircrafts with prop rotors instead of jets, as I once read an account of a Chilean man being torn to shreds by an exploded propeller arm (the plane would crash at that point anyway, but by God I’ll be alive to see the ground come up).

While most experts would agree that the things I fear are unreasonable, one of the deadly scenarios that once seemed impossible is now a more legitimate threat than ever. I’m talking about sinkholes.

The once-implausible chance of being swallowed by the earth, sucked down into a realm where slithery, unknown beings dwell, now seems to be a regular occurrence. In February, a sinkhole in Kentucky helped itself to eight rare Corvettes from a car museum, although rumors perpetuate that the sinkhole was actually in the mood for Mustang. Months before, in August 2013, the earth opened up beneath a resort near Disney World and nearly swallowed 35 guests. Fortunately, there were no casualties. And who could forget the mammoth, 65-foot wide Guatemala City sinkhole that appeared in 2010, after a similar one appeared in 2007 just a few neighborhoods over? (Apparently the planet has about had it with Guatemala City). This is to say nothing of the sinkhole that stopped traffic on Folsom last spring.

So what’s going on? Primarily, sinkholes are a naturally occurring phenomenon. When the stone beneath an area of ground is being slowly dissolved from water erosion, it can eventually lead to a large cavern being carved out under the surface. The area will then be prone to collapsing. Only certain types of domestic bedrock are so highly permeable to water that they cause risk for a sinkhole; regions in the south and southeast United States tend to be most at risk.

But it is also possible for human activity to cause sinkholes. Drilling and its associated vibrations can upset bedrock below ground. Heavy traffic overhead can disrupt the situation under there as well. More than anything, practices that involve the relocation or removal of water increase risk of sinkholes. By pumping ground water out, we risk leaving behind a massive gaping hole where a fluid foundation once lay. Similarly, the asphalt in urban areas keeps rain from becoming groundwater, directing it into storm drains and out of the city. Forcing mass amounts of water through areas that weren’t always subject to such flow can cause sinkholes.

Unfortunately it is impossible to prevent all sinkholes. Those that are naturally occurring are nearly unpredictable. People in at-risk regions such as Kentucky and Florida will need to pay heed to every creak and groan from their homes, praying it won’t be the last thing they hear before being absorbed into the darkness. If sinkholes can be predicted ahead of time, a landowner can have the hole filled with cement or a similar material. So folks, make sure to keep a watchful eye beneath the bedrock of your homes.

But that isn’t to say we can’t step up efforts to stop human-induced sinkholes. The recent boom could well be spurred by man’s meddling with groundwater. Drainage systems that redirect large amounts of water to a single location should be re-evaluated to ensure the bedrock isn’t being deteriorated. Aquifers underneath urban areas are probably not best kept empty, and we’ve definitely got to stop building on swamps—amazingly, wetlands aren’t the most stable foundations in the world.

A few weeks ago, my roommate quipped to our landlord that the great number of cracks around our house were the result of a forming sinkhole. The landlord’s refusal to laugh usually wouldn’t have concerned me, but these days, you can never be too sure. All I can do is hope that the ground beneath my feet isn’t being eaten away by water gushing from some broken water main, carving an intricate and potentially deadly hollow.