CU football far from perfect in victory over UMass 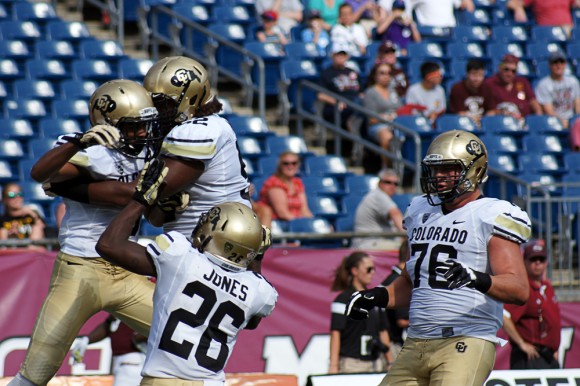 Saturday’s 41-38 win for the Buffs in Massachusetts can be viewed two ways. You could look at it in a positive light — it is a win, after all — or in a negative light, considering the competition.

Colorado was an 18-point favorite going into the matchup against UMass. This was not because the Buffs are that great, but because the Minutemen are that bad. UMass has never beaten a power conference team and it hadn’t even scored more than 13 points against one of these teams until Saturday. Even with CU’s disappointing start last week against Colorado State, most expected them to handle UMass much easier than they did.

That said, there were some bright spots for the Buffaloes. They showed great resiliency in scoring 21 straight points in the third and fourth quarters to grab ahold of the lead after losing it.

“It’s definitely easy to panic and give up. I’m really proud of the team for showing some heart and fighting,” sophomore quarterback Sefo Liufau said about being down 31-20 in the third quarter.

When Liufau was allowed time to throw down field, he continued to have great connections with his wide receivers, junior Nelson Spruce and freshman Shay Fields. Fields’ speed was too much for UMass to handle, especially on CU’s first touchdown, where he ran up the sideline for a score. Spruce also caught another bomb for 70 yards that was reminiscent of his catch against CSU last week. In just two games, he has 17 catches for 259 yards and four touchdowns.

“Protection broke down…I rolled to the right, Spruce was already going down the middle, and I tried to give him a chance,” Liufau said, noting that the play was “kind of reminiscent of high school. I threw a lot of those in high school, kind of natural, but props to Spruce for running and finishing the play.”

In the second half, the Buffaloes ran the ball well with the combination of speedy senior running back Tony Jones and bruising junior back Christian Powell. They combined for seven rushes (63 yards) in the third quarter, when the Buffaloes began to take control.

A major concern for Colorado was penalties. During a drive in the fourth quarter, Colorado committed three personal fouls that led to UMass scoring a touchdown and bringing the Minutemen within three points. The Buffs were set back by 12 penalties for 124 yards, but head coach Mike MacIntyre wasn’t too concerned.

“Our problem mainly concerns the new rules, the new rules on defensive backs and roughing the passers,” MacIntyre said. “We have some younger guys and they will learn. We aren’t worried about having more penalties, because everybody has more penalties right now.”

A three-point victory against UMass may not be a great source of pride, but at this point the Colorado football program will take any positivity they can get and build off of it.

“We just wanted to go out there, play a whole game to the end and finish strong,” MacIntyre said. “I told my players that they needed to each go out and just do their job. We have the heart, the fight and the attitude.”

The Buffs will need to improve quickly for any hope in the Pac-12. Playing the way they have lately will translate to losses against quality opponents. Colorado faces No. 17 Arizona State next Saturday night, Sept. 13 at Folsom Field. The game will be broadcast on ESPNU.

Notes: Will Oliver broke the Colorado school record for consecutive extra-point conversions with 66. Despite playing in the New England Patriot’s Gillette Stadium, attendance for the game was only 10,277. Liufau’s 318 yards passing was the second-highest total of his career. Colorado’s only turnover in the game, a Liufau interception in the third quarter, was the latest into a season CU has gone in committing its first turnover. 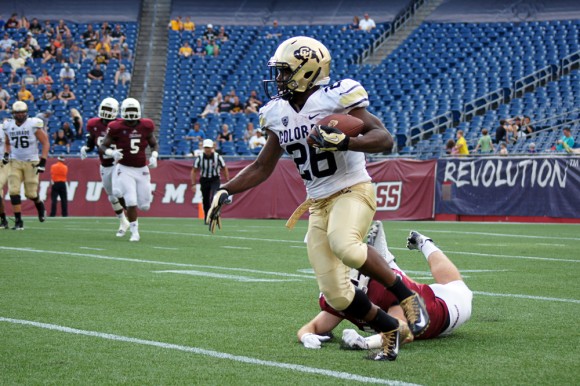