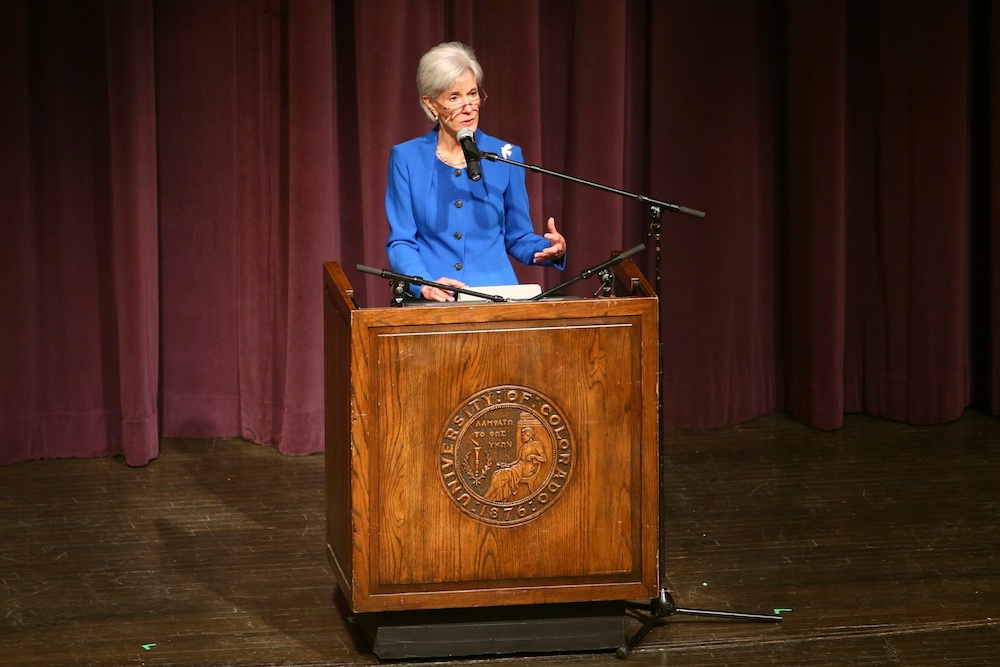 Kathleen Sebelius, the fomer United States Secretary of Health and Human Services, addresses the crowd during her keynote speech at the 66th Conference of World Affairs in Macky Auditorium at the University of Colorado Boulder on April 7, 2014. (Nigel Amstock/CU Independent)

Since the ongoing passage of the Affordable Care Act, CU students have been using Wardenburg Health Center for well-check visits more often, as opposed to coming in only when they’re sick, according to one of the clinic’s officials.

The Affordable Care Act, also known as Obamacare, has set a list of “Ten Essential Health Benefits” for all qualified plans. Health plans sold after Jan. 1, 2014, whether on or off the Health Insurance Marketplace, through small group plans or with government health care options like Medicare, will offer at least this set of ten essential benefits, regardless of the cost.

“For the past three years, we’ve been implementing [the law] in pieces so that it wouldn’t pass all at once and raise our premiums,” said Shelley Sheppeck, business services manager at Wardenburg. “But a lot of what we already provided is now being supported by ACA — we didn’t need a law to tell us that we needed it.”

Diagnosing and treating mental health conditions or substance abuse disorders is part of the ACA mandate for Mental Health Parity across health plans. But Wardenburg’s medical and mental health services already had parity, so that aspect of the law will not affect business operations.

“We’re experiencing small changes, but nothing major,” Sheppeck said. “This law means that students don’t have to pay out-of-pocket for birth control, for example — their insurance will pay for it. So what that causes is more women coming into the clinic.”

So far, one of the biggest changes Wardenburg has seen from the Affordable Care Act is the amount of women coming in for an HPV vaccine. With new incentives for preventative care, female students in particular are scheduling appointments more frequently.

Concerns over the affordability and popularity of health care in the United States were also subjects at a panel at this year’s Conference on World Affairs, called “Healthcare: It’s Big Bucks.”

Panelist Joel Gallant, an adjunct professor of medicine at Johns Hopkins University, described the current state of what he called socialized health care in the United States.

“If you look at popularity of health care in the U.S., and you ask people how happy they are, the happiest are veterans, military and people on Medicare, which are all examples of socialized systems,” Gallant said.

“Of the eligible uninsured, 90% elected not to enroll in coverage, the number-one reason being lack of affordability, which is the problem with a law called the Affordable Care Act,” Benson said.

The challenge of the Affordable Care Act, according to these panelists, is finding a way to keep the total expenditures of health care down, while at the same time expanding coverage.

“It’s nice to know I don’t have to pay as much at Wardenburg, because this will encourage me to use their free services more often, even if I don’t really get why the law now covers them,” said Samantha Mcmenemy, a 19-yar-old freshman integrative physiology major.

The aforementioned Essential Health Benefits prevent and treat sickness, but do not include elective and “non-essential treatments.” Although all qualified plans must offer the essential benefits, the scope and quantity of services offered under each category can vary.

“It just opens access to care tremendously. The way we do business has actually not changed, we’ve always provided very low-cost care as well as preventive care,” Sheppeck said.