Mens basketball fight back to beat Harvard at home

With a 5-1 record this season, no true challenges have presented themselves to the basketball team. Hosting the Harvard Crimson on Saturday afternoon, Harvard was just the opponent the Buffs needed to get ready for conference play, according to head coach Tad Boyle.

“This was a conference-type atmosphere,” Boyle said after the game. “That should give our guys the understanding that it will (always) be hard to win.”

After trailing the Crimson for the entire game, the Buffs managed to gain the lead with five minutes left. They turned that momentum into a final score of  70-62.

The Buffs offense started off slow against Harvard, who managed to build a 16-4 lead after five minutes of play. Harvard’s points came from perimeter shooting and particularly point guard Siyani Chambers, who recorded 10 points in the first half. Harvard’s overall three-point percentage for the first half was .40.

“Moving on the pass was the biggest thing in the first half that we didn’t do,” Boyle said. “Harvard moves the ball quickly. It’s all about adjusting.”

Colorado found a sense of urgency and a drive by junior guard Askia Booker brought their deficit back to four points with 10:28 left. Junior point guard Spencer Dinwiddie recorded seven points in the half for the Buffs, but that mixed with sophomore Josh Scott, freshman Wesley Gordon and sophomore Xavier Talton’s points from the field were not enough to gain the lead. The half ended at 42-30 in favor of the Crimson. 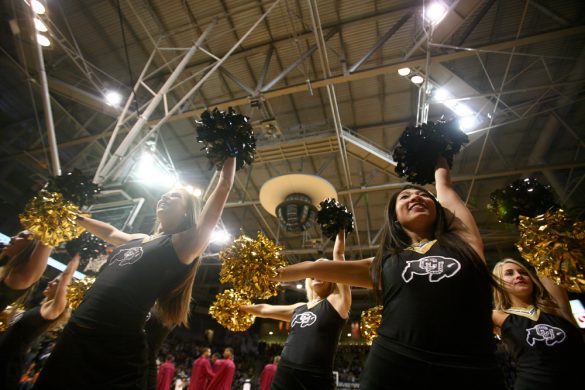 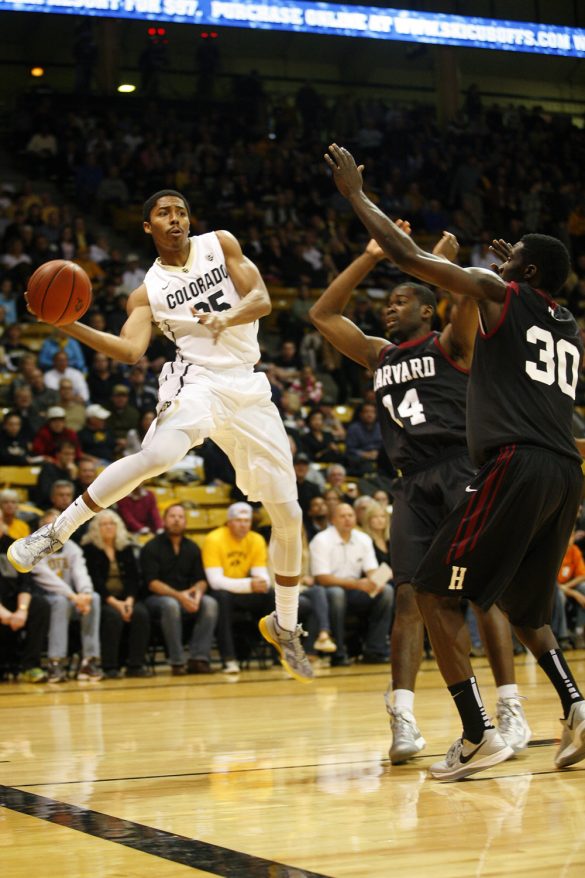 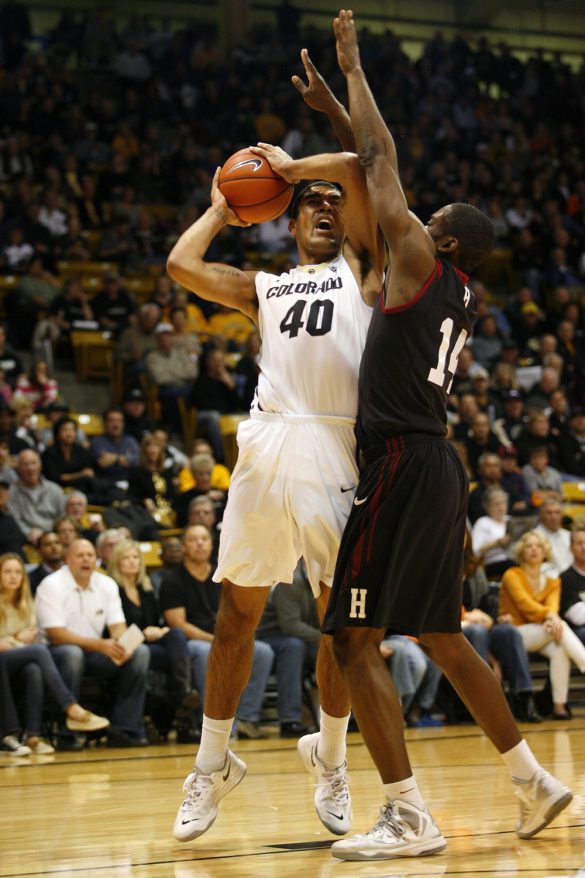 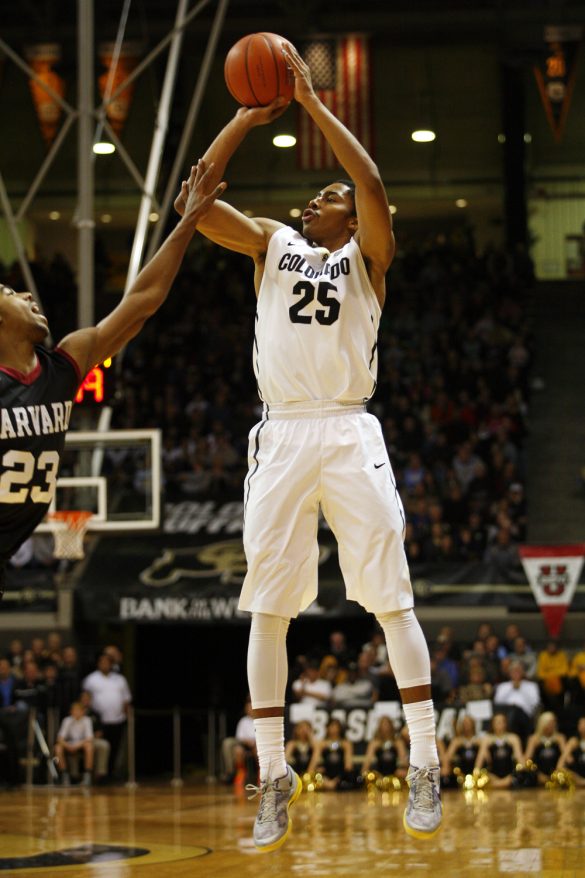 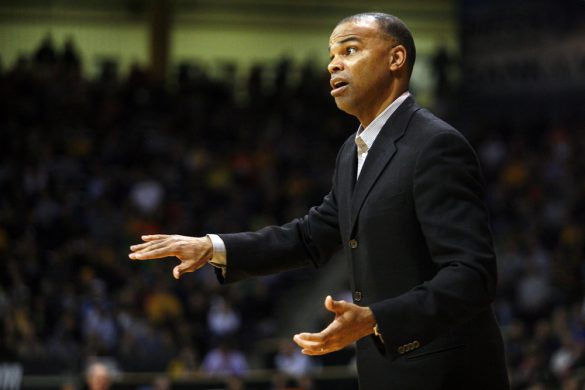 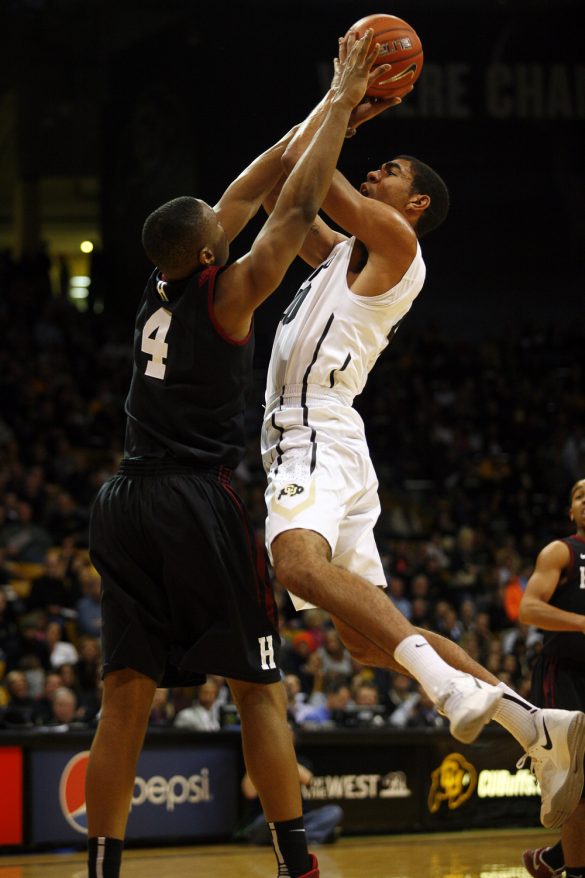 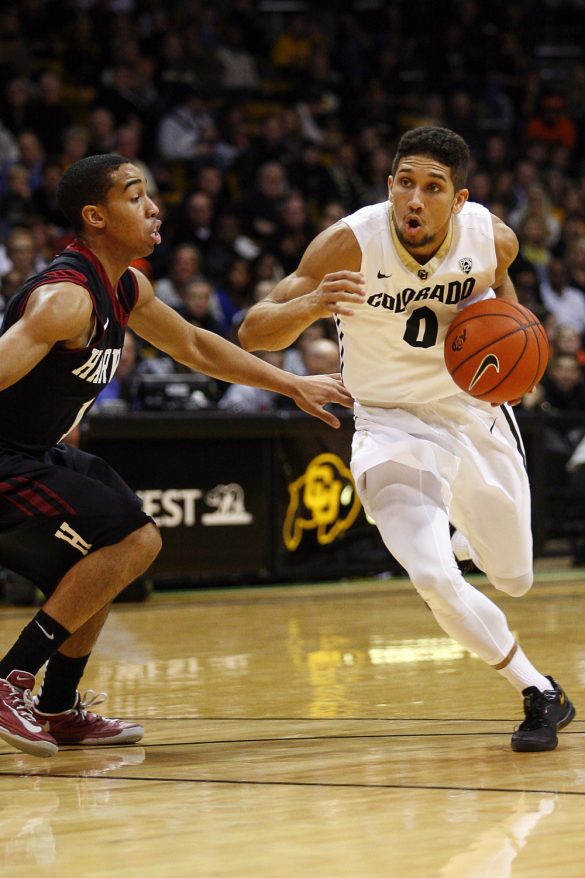 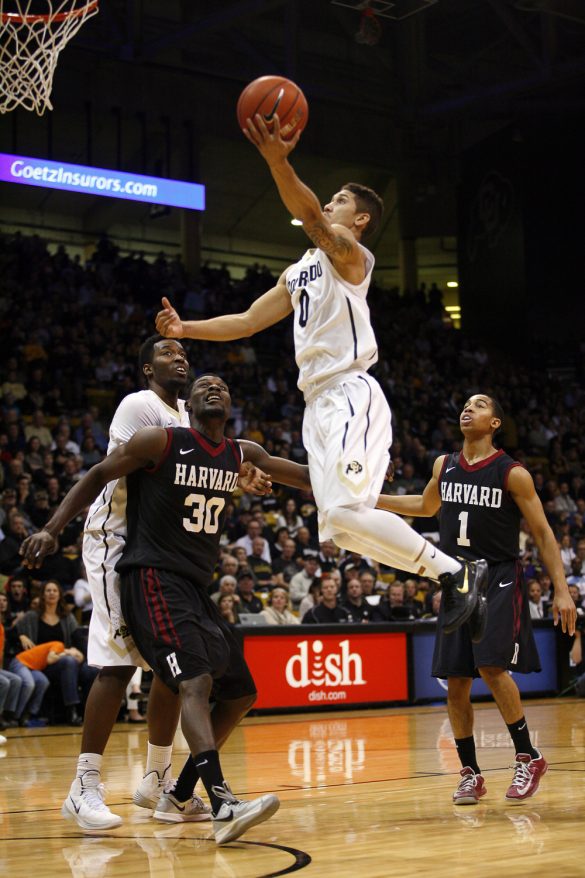 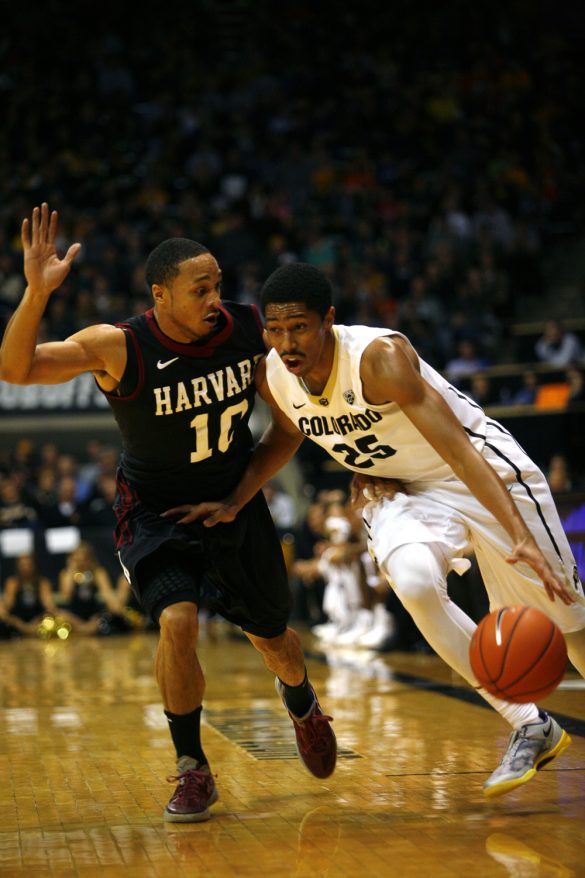 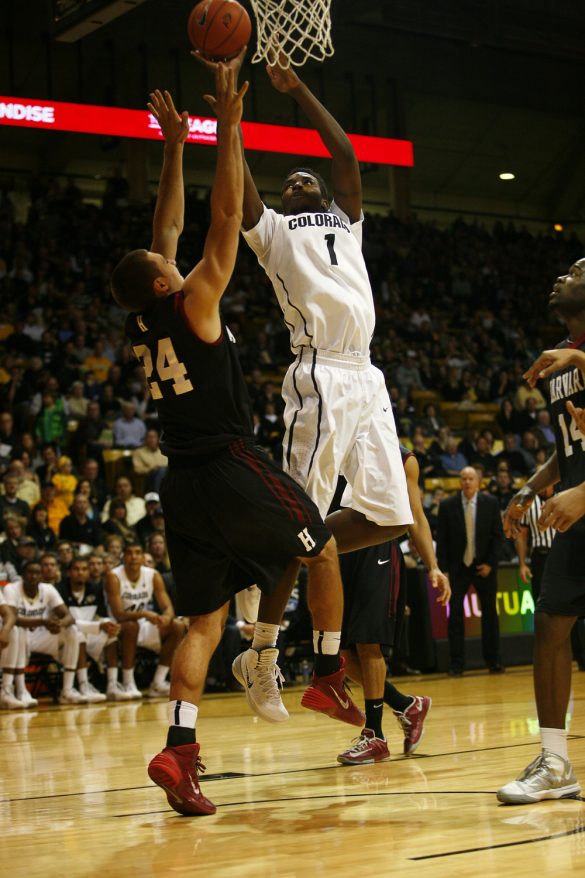 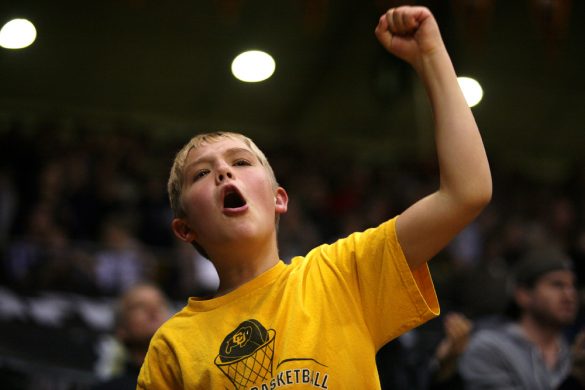 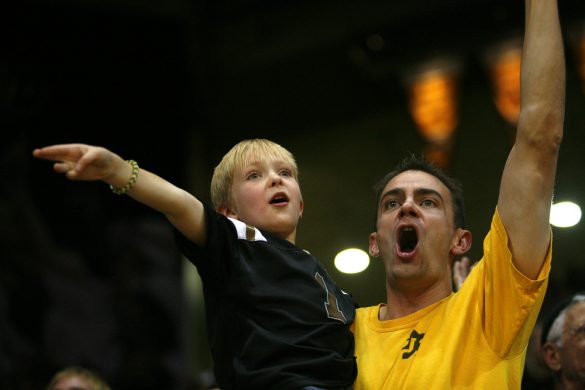 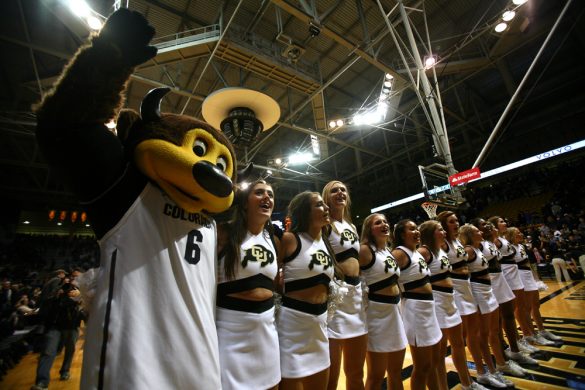 Harvard’s shooting regressed to 23 percent in the second half, and the Buffs started things off after halftime with a 9-point run. Sophomore forward Scott led the charge defensively throughout the rest of the game, recording 10 points and 9 rebounds in the second half.

“What changed was our defensive talking,” Scott said. “We locked them down, and I wasn’t in foul trouble, (so) I just wanted to play hard when I got time in.”

Coach Boyle agreed, saying the Buffs started to show their competitive spirit in the second half.

“The difference in the game defensively in the second half was Wesley Gordon and Josh Scott,” Boyle said. “Our team’s got fight in it. We’ve got competitors.”

After a Crimson time out with 15:01 remaining, a crucial two-point shot by sophomore guard Talton pushed the Buffs past 40 points and within five of Harvard.

Booker contributed 12 points for the Buffs, leading the motion offense alongside Dinwiddie. Booker shot 33 percent from the field in the second half.

A true breakthrough finally came with five minutes remaining in the game. A steal by Scott at 5:17 led to an open three-point shot by Johnson on the other end of the floor, putting the Buffs up 53-52. After that, two successive three-pointers were made by Johnson and Dinwiddie, giving Colorado a seven-point advantage. Harvard called a time-out with 3:27 to go.

“Coach Boyle laid out the game plan for us, and we had great ball movement and played inside out,” Johnson said about the second half strategy. “Our backs were against the wall (and) we needed the crowd behind us to get the ‘W’.”

Shots by Dinwiddie and Scott offset the eight points scored by Harvard in the final three minutes. Booker, Dinwiddie and Talton shot free throws because of Harvard being in the bonus. Talton was two for three from the line, and Booker was two for two.

Harvard missed a final shot, leaving the final score at 70-62. The Buffs’ record rises to 6-1 going into Saturday’s match up against the Air Force Academy in Colorado Springs. Tip off is at 2 p.m. MST and will appear on the Mountain West Network.

“This was a really big win,” Scott said. “If we played two halves like that, we could beat anybody. It’s encouraging.”