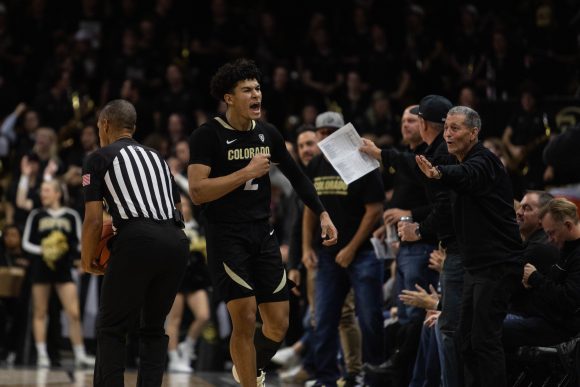 Sophomore guard KJ Simpson celebrates after scoring a three-point basket as the Buffs gain a lead over the Rams during the second half at the CU Events Center. Dec. 8, 2022. (Kara Wagenknecht/CU Independent)

The CU Events center was electric Sunday afternoon after multiple major milestones came out of Colorado’s (7-5 overall) win over the University of Northern Colorado (5-6 overall).  Meeting for the 41st time, the Buffs defeated the Bears 88-77 and gave head coach Tad Boyle his 261st win.

This 261st victory tied Boyle for the school record of all-time wins. After this game, Boyle tied with Sox Walseth, who held the record with 261 wins.

“Sox’s name is on the court,” said Boyle.  “I never got the opportunity to meet him, unfortunately. Still, I’ve met many members of his family who are season ticket holders to this day and have been since the day I got here and even previous to my being here. So the Walseth family is special. Sox was a special man. I’m honored to be in his company.”

Previously coaching at UNC from 2006-2010, Boyle got emotional when he talked about his victory while five of his UNC players returned for the matchup.

“That school gave me my start and those guys helped me become the coach I am,” Boyle said. “That meant a lot to me, to have them be here. It was an incredible feeling…I wouldn’t be here today if it wasn’t for those five guys and other guys like them that played their tails off for the Bears.”

This Wednesday, Boyle has the opportunity to break the record when Colorado plays Southern Utah. Not only was this a significant victory for Boyle, but Tristan da Silva broke his career-high scoring record for the second game in a row.

Just last Thursday, da Silva set numerous career highs including his total point record, which was 25 points. Against UNC, da Silva managed to break his record in the final minutes of the second half.  Between consistent field goals and persistent free throws, da Silva hit 26 points.

“Just being aggressive, said da Silva. “It starts in practice. I’m trying to be an anchor on offense, and help my teammates out by being aggressive. Then when you practice like that, it also translates to the game. I think that’s the biggest point.”

“Tristan is playing with a lot of confidence,” Boyle said. “Not that he wasn’t before, but you can just tell his demeanor on the floor is a little different. He’s such a matchup nightmare.”

The first 15 minutes of the half were unpredictable. The Buffs couldn’t grasp a lead despite Colorado winning the tip-off. The Bears and the Buffs went point for point with over 10 lead changes and six times they were tied. In the final five minutes of the half, Colorado had a small five-point scoring run which gave them the lead. UNC would chip away at their lead but Colorado never gave it up from that moment on. Going into halftime, the Buffs led 46-39.

Following the half, Colorado continued to hold their lead but seemed sluggish. The Bears managed to get within a five-point margin multiple times. Colorado would attempt to retaliate but UNC kept the lead minimal.

Within two minutes, Colorado had grown their lead to 10 points which forced UNC to call a timeout. Coming out of the timeout, the Bears couldn’t match the points put up by Colorado which allowed their lead to grow to as much as a 19-point margin.  The Bears shaved the lead down to single digits in the final minutes. Colorado secured their win with four da Silva free throws, ending the matchup 88-77.

Colorado is finally seeing some momentum and breaking its detrimental loss pattern. This victory marks the third one in a row for Colorado making it the first winning streak of the season.

“It was a good win for us,” Boyle said. “I was nervous coming in because UNC has some dynamic offensive players. We didn’t finish the game as I wanted but we’re doing some really good things. We were good again offensively sharing the ball; we were efficient on offense and we rebounded the ball well. I just think we can finish a little bit better than we did tonight, but it was a good win.”

Three other players made double digits on the Buff’s stat sheet. KJ Simpson had 18 points, followed by Javon Ruffin with 12 points and Julian Hammond with 11. Not only did Simpson stand out with 18 points, but he had a consistent game. Simpson went 7-10 on field goals as well as 2-2 on free throws and three-pointers. Simpson spoke on Hammond and Ruffins’s double-digit game.

“Everybody’s capable of having a game like that,” said Simpson. “In practice we’re working really hard, extremely hard, especially going up against those guys. It shows how deep our team is. They’re capable of doing it on any given night, and it’s good to see them get it going, and then hopefully they can build off of it. But they’re great players and it’s a testament to how hard we’ve been practicing.”

Overall, Colorado had a great night statistically. The Buffs held UNC to an overall low 47 shooting percentage and 13-30 in the second half. While keeping UNC low, offensively Colorado shot 35-62 giving the Buffs a 56.5 shooting percentage.  The Buff’s demise was once again free throws, which are slowly improving as the season progresses. Colorado had a 66 percent completion which improved by three percent compared to the North Alabama game last week.

Colorado will host Southern Utah University on Wednesday, December 21 at 6 p.m. MST. This is the last game before conference play resumes.