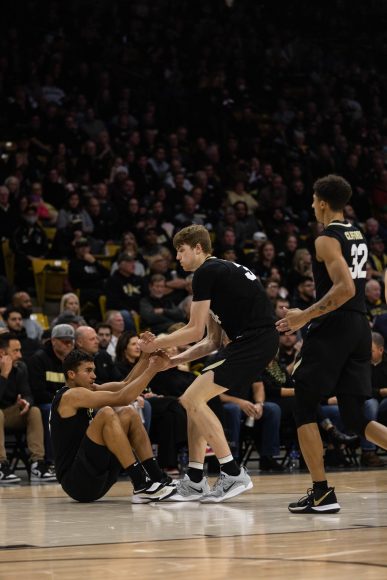 On Wednesday night, the Colorado Buffaloes beat the Southern Utah Thunderbirds 86-78, giving Head Coach Tad Boyle the all-time wins record for Buffaloes basketball. With his 262nd win in his 13th year in Boulder, Boyle passed Russell “Sox” Walseth for the most wins in program history, a record that stood for 46 years.

Without Luke O’Brien and Lawson Lovering, Colorado only played eight total players for the entirety of the game. The contest stayed tight for a while, but thanks to Tristan da Silva’s first career double-double, along with a late surge of points from K.J. Simspon, the Buffs held on. Though not usually someone who shows his raw emotions, Tad Boyle talked to reporters after the game, bringing up a few members of the Colorado basketball staff in what was a heartfelt moment.

“It’s really important that they had these four people up here with me tonight because they deserve this and have been a part of this just as much as I have: Mindy Sclaro, Marge Marcy, Mike Rohn and Bill Cartun,” Boyle said. “[As well as] every former player and every current player. So to me, that’s what it’s about. It’s not about me, it’s about them. It’s about what we do together as a team.”

After the record-setting win, a tribute video was shown with Coach Boyle’s highlights from his career so far in Boulder. It also had videos sent from Boyle’s friends, coaches, teammates and former players; all congratulating him with a thoughtful message. Cardboard cutouts and t-shirts were also given to the players and staff after the game with a silhouette of Coach Boyle and a big black and gold ‘262’ in the middle.

“It meant a great deal to me because everybody that’s on that video has been a part of my life as well,” Boyle said. “Whether I coached with them, played with them, or coached them. There’re so many more people that could have been on that video who’ve had an impact on my life. So it was a special moment.”

En route to his coach’s record-breaking night, Tristan da Silva scored 20 or more points for the third game in a row, continuing a great stretch of play. Da Silva had his first double-double with 20 points and ten rebounds, as well as leading the Buffs defensive pressure, finishing with three steals. In a game where the Buffs had 12 steals and four blocks, da Silva set an aggressive tone, forcing the Thunderbirds to take tough shots and make bad passes.

“We’re on a 12-day run right now with practices and games so it was a grind out there, that’s for sure,” da Silva said. “It was a little bit scrappy, I guess you could see that at the end, but we fought and we kept ourselves in the game and gave ourselves a chance to win at the end of the day so that’s all that we were looking for.”

Though the Buffs scored 86 points on Wednesday, they still continued to shoot the ball from the 3-point line. As a team, Colorado finished shooting three for 17, compared to 12 for 29 for Southern Utah. However, Colorado found most of their shots up close, as they finished with 52 points in the paint, 23 of which came in transition. The 15 turnovers Colorado forced also was a large factor in their win, as many of them came during a 13-0 run by CU which closed out the game late in the second half.

“We stress attacking the paint before we get jump shots so that’s a big thing for us,” Nique Clifford said. “Every game is just getting paint touches and I think that leads to better looking for better shots on the perimeter as well. I feel like we did a pretty decent job getting to the free throw line and attacking the rim and then just getting stops down the stretch when we needed to.”

Clifford finished with 14 points, six rebounds and three assists in what was perhaps his best all-around game so far this season. Clifford also was a defensive anchor for Colorado as he recorded two steals and two blocks, filling in for the Buffs’ injured big men. Julian Hammond also played one of his best games of the season, as the sophomore finished with 11 points, two rebounds and three assists.

“Ju hasn’t been playing to his potential like he knows he can and we’ve been going through it so it’s really good for his confidence and for him to see the ball go in the basket and be aggressive for us,” Clifford said after the game. “I’m definitely proud of him. He’s been practicing well, playing off two feet and taking care of the ball. That’s been big for us. He has to be a leader for us and be a point guard. I think that’s what he’s been focusing on and it’s shown in the games.”

Another key piece that helped wrap up the win was the limited amount of turnovers created by the Buffs, finishing with only seven total as a team. As the main ball handler of the team, K.J. Simpson played a big part in making smart decisions with the basketball. Simpson finished with 21 points, three rebounds and four assists, along with making 11 of his 13 free throws, many of which came during the Buffs’ late run. Though he shot five of 14 from the field, Simpson proves he can find other ways to score when his jump shots aren’t falling.

After the record-setting victory on Wednesday, the Buffs’ win streak now increases to four. By continuing their efforts of aggressive defense forcing tough shots, keeping turnovers to a minimum and finding easy points in the paint, Colorado goes back into Pac-12 play with an 8-5 overall record.

Colorado’s next game is on Thursday, Dec. 29, as the team travels to Northern California to take on Stanford University. The game will be at 9 p.m. MST at the Stanford Maples Pavilion as Tad Boyle looks to extend his all-time wins record.