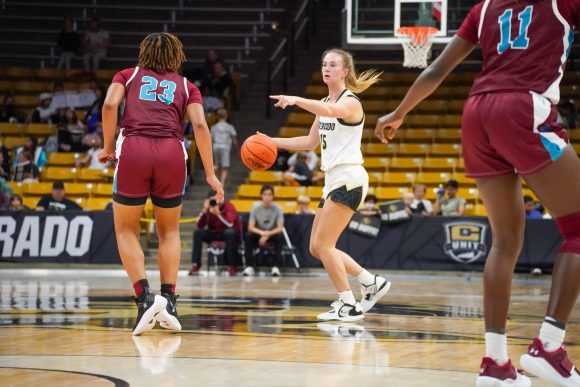 Sophomore guard Kindyll Wetta signals to her teammates during the game against New Mexico State at the CU Events Center on Monday, November. 7, 2022. (Rachel Glazer/CU Independent)

While many CU students headed home for fall break, the CU women’s basketball team traveled to their matches in Tennessee, followed by Chicago two days later. The Buffs held a record of 5-1 leading into the break and were coming off a big win over the Air Force Academy at home, beating them 71-63.

CU had anticipated a competitive game against the No. 23 University of Tennessee, which provide true after intense play all four quarters.

In the first quarter, the Buffs scored all their points from the free throw line and field goals, as the Buffaloes could not hit from deep. CU was missing one of their top 3-point shooters, Frida Formann, who was playing for her Denmark team in the FIBA Women’s Eurobasket Qualifiers. The Vols responded with 17 points to Colorado’s nine, putting scoring pressure on the Buffs in the second quarter.

Unfortunately, the Buffs found even less scoring success after the first quarter. Although guards Kindyll Wetta and Jaylyn Sherrod were quick to dribble around Tennessee defenders, the team could not capitalize on scoring opportunities, shooting only 15% from inside the 3-point line.

“We have a long way to go in playing the type of basketball we want to play,” said Head Coach JR Payne. “I loved our grit and toughness down the stretch, but we need to play like that for 40 minutes. We have to be tougher. We have to be more disciplined in executing. There are a couple of things I think we really need to prioritize as a group. We’ll learn from it and move on.”

After the half, both teams ramped up their effort, and the match’s momentum seemed to favor the Buffs for a time. Aaronette Vonleh hit multiple shots inside the key from well-timed passes from the guards. CU had their highest-scoring quarter of the game, racking up 21 points. However, the Vols matched this energy by scoring 27 of their own and preserving their lead.

With motivation from a high-scoring third quarter, the Buffs kept up the intensity for the fourth and continued to score field goals and even a couple of threes. On defense, CU prevented outside shots that had fallen earlier in the game, preventing the Vols from getting easy buckets. The Buffs outscored the Vols in the fourth quarter 16-12 but could not get over the hump to beat Tennessee, losing the game 69-51.

Two days later, the Buffs headed to Illinois to play Chicago State. With an overall record of 4-2, Colorado hoped to secure a win against the Cougars. Formann returned for this match ready to support her teammates in their second game over the holiday break. It became a special day for J.R. Payne, who notched her 200 career win.

“I didn’t know that was coming,” said Payne after the win. “We’ve had incredible coaching staffs that have been together for a really long time. It’s cool, but it’s not something that I necessarily knew about.”

The Buffs had their highest-scoring quarter of the game right from the get-go, scoring a whopping 27 points in the first. Colorado shot 70% from the field, 50% from the three, and 100% from the free-throw line, dominating the match right from the start. On defense, the Buffs only let in four out of 20 of the Cougar’s shots, allowing them to keep their significant lead.

Colorado had a similar second quarter, scoring 19 points to Chicago’s seven. Senior Quay Miller made multiple buckets from the paint and had numerous steals on defense. The Buffs were able to take chances on the Cougar’s basket while also preventing counter-attacks, causing evident frustration for Chicago. The half ended 46-19, with the Buffs soaring ahead.

“It didn’t matter whom we were playing,” said Payne. “We were trying to get better in our execution. We wanted to ensure we were on the same page and prioritized our details. There were so many possessions against Tennessee that we just weren’t on the same page. [Today] was a great opportunity to really prioritize our communication, execution and attention to detail. We did that really well.”

In the third quarter, the Cougars attempted to limit Colorado’s scoring chances by double-teaming outside shooters on defense, but this opened up scoring lanes for the centers. Vonleh led the team in points in this match, dropping in 18 points from inside the three-point line. Fifth-year guard Tayanna Jones was right behind Vonleh with 15 points, adding to the large total.

Scoring luck only worsened for the Cougars in the fourth quarter as Colorado held them to a mere four points and, at one point, went on a scoring run of 21-0. Payne is known for her heavy focus on defense during practices and across all games, which certainly pays off in games like the one against Chicago. The contest ended 83-32, sending the Buffs home with a win on the road.

These games both offered valuable lessons that CU must incorporate into their upcoming matches against Western Michigan on Wednesday, Nov. 30, followed by Boise State on Sunday, Dec. 4.