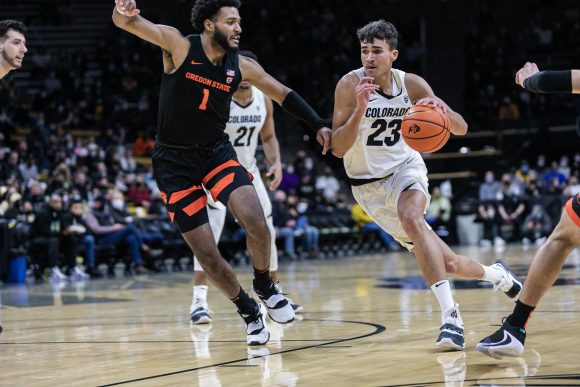 On Sunday, the Colorado men’s basketball team, 4-3, won a hard-fought game against the Yale Bulldogs, 6-1, 65-62. The game came after a tough outing for CU at the Myrtle Beach Invitational and after a much-needed Thanksgiving break for the team. After a week of rest, the Buffs won their second home game of the season, thanks to Tristan da Silva and J’Vonne Hadley.

Colorado led for the game but faced a constant attack from Yale. The Buffs had a 10-point lead for most of the game but could never completely pull away from the undefeated Bulldogs. After being up 38-28 at halftime, Colorado’s lead was down to two after the Buffs missed seven shots in a row. The game came down to the final whistle and with 10 seconds left, and CU up by one point, K.J. Simpson tipped a pass headed toward Yale’s best scorer. This let graduate transfer Jalen Gabiddon seal the deal against his former team, hitting two free throws to finalize the win 65-62.

“We beat a really, really good program [today],” said Head Coach Tad Boyle. “A team that’s well coached… I think that as we come into league play, at least our guys understand that nothing will be easy because our schedule has not been easy. We needed this today. I thought our guys showed grit and toughness down the stretch, but there are still areas we can improve on.”

Both da Silva and Hadley returned to play against Yale after sitting out last week’s game against Boise State. Right from the start of the game, da Silva made his presence known, scoring seven points early. He eventually finished with 20 points and six rebounds, leading the team in both categories.

Two of those 20 points were an attempted dunk turned reverse layup after da Silva retained possession of the ball all while mid-air. After the game, da Silva told reporters that he and Coach Boyle want that success to continue.

“Me and Coach Boyle talked,” said da Silva. “He wants me to be more aggressive. I’m just trying to be out there and be aggressive and help my team try to make the right plays and if that’s scoring, I’ll do that. I just want to come up and be aggressive right away.”

Hadley also played an all-around great game after sitting out the previous two matches due to a shoulder injury. Hadley ended the game with 13 points and five rebounds, only missing one shot in his 24 minutes on the court. The 6’6″ junior provides significant defending and rebounding for the Buffs.

“I try to be that energy guy,” said Hadley. “I try to be that scrappy guy that does it all. Sometimes it doesn’t work in my favor, but at least I’m yelling and screaming. And yeah, it felt good to be out there again, back with my teammates, back at home with the home crowd.”

In a perhaps smaller role with da Silva and Hadley back in the rotation, sophomore K.J. Simpson continued his above-average production for the Buffs. He finished with 10 points and three assists and continued to set the pace for the Colorado offense.

“The one thing about [Simpson] you don’t have to worry about is he’s a competitor,” said Boyle about his starting point guard. “[Simpson’s] got toughness, he’s got grit. I don’t worry about him in those categories and he showed it there at the end.”

CU ended the game shooting only 42% from the field and only hitting 4 of the 18 shots from three-point range.

However, despite their below-average shooting, the Buffs’ lack of turnovers was one of the main reasons they finished on top. Colorado kept better control of the ball with only eight turnovers as a team throughout the 40-minute game, limiting the mistakes made in previous games. Compared to the 15 they average in their losses, these eight turnovers are one of the most important aspects necessary to be a successful team.

“Every night won’t be like that,” said Boyle on the offensive ball security. “[There’s] a lot of room for improvement. I think finishing for our team and making good decisions is a part of finishing. We’ve got to be better decision-makers on offense…we still have some guys who have to get a bit better at that.”

The Colorado Buffaloes’ next game is against the Arizona State Sun Devils, who they beat 75-57 last year in Tempe. The game will be on Thursday, Dec. 1, at 6:30 pm at the CU Events Center, opening up conference play for the Buffs.