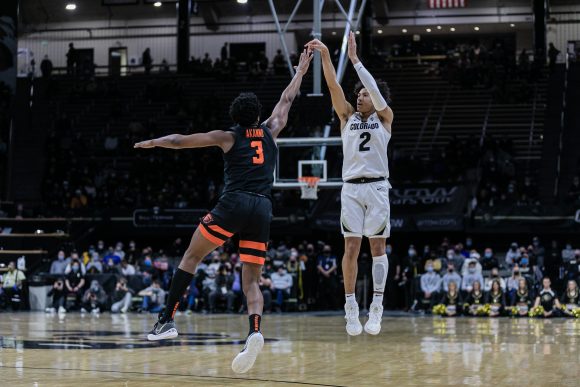 Freshman guard K.J. Simpson (2) shoots and scores against Oregon State during the game at the CU Events Center on Feb. 5, 2022. (Io Hartman/CU Independent)

It was the tale of two stories for the University of Colorado Boulder men’s basketball team road trip over the past weekend.

On Friday night, Nov. 11, the Buffaloes could not muster anything against Grambling State. Two days later, in a midday showdown against the No. 11 Tennessee Volunteers in Nashville, the Buffaloes showed up and upset the Vols, 78-67.

Head coach Tad Boyle trotted out a completely different starting five in search of answers after Friday night’s debacle. The only holdover starter for the contest at the Bridgestone Center was sophomore center Lawson Lovering.

“Let’s learn from the last 48 hours,” said Boyle. “It’s all about our mindset. Our mindset was where it needed to be today.”

The beginning of the game closely resembled some of the same turnover problems from the Grambling State loss, with eight turnovers in the first seven minutes of action. Unlike Friday, the starting five showed high energy and effort, especially on the defensive end.

Colorado’s defense was the story of the first half, holding Tennessee to a 23% field goal percentage. The Buffaloes’ scrappiness on defense was well-documented by their fouls, sending the Volunteers to the line over 20 times.

“Free throws kept [Tennessee] in the game,” said Boyle. “That and our turnovers.”

Despite the fouls and turnovers, CU went 9-1 towards the end of the half to close the Tennessee lead to 34-32. Sophomore guard KJ Simpson capped the Colorado half by draining a deep three-pointer to give the Buffs all the momentum. It was a career day for Simpson, who led the Buffs with 23 points and grabbed 10 rebounds, both career-highs, which secured him his first career double-double.

The second half was all Colorado. Merely two minutes into the half, the Buffs took the lead on graduate guard Jalen Gabbidon’s three-pointer and never looked back. Although Tennessee kept it close until the under-12 media timeout, Colorado held on to its lead. Sophomore forward Tristan da Silva punctuated the victory with a wide-open three-pointer to break the game open.

“That three was really the dagger,” said Boyle.

Regular starters da Silva and Simpson were critical to the Buffs’ victory over the Volunteers. da Silva was an efficient 5 for 7 from the field and 2-3 from behind the arc. Simpson exemplified the Buffaloes’ aggressiveness in getting into the paint, which proved pivotal to their successes and set the tone for the rest of the team.

“A lot of us were disappointed after Grambling,” said Simpson. “Coach was really disappointed. My job as a leader of this team is to set the tone. It’s all about a tough mindset.”

The Colorado defense was the game’s story, holding the Vols to 25% from the field and outrebounding them 47-38, two of the main points of emphasis for a Boyle-coached team.

“We really got after them defensively,” said Boyle. “The grit and toughness our guys showed was great. We beat a very good basketball team.”

The Buffaloes will continue their road trip in Conway, South Carolina, at the Myrtle Beach Invitational beginning on Thursday, Nov. 17. Colorado will open the pre-Thanksgiving tournament against the University of Massachusetts at 11:30 a.m. MST on ESPNU. The other teams in the tournament, and possible CU opponents, include Texas A&M, Murray State, Boise State, Charlotte, Loyola Chicago and Tulsa.