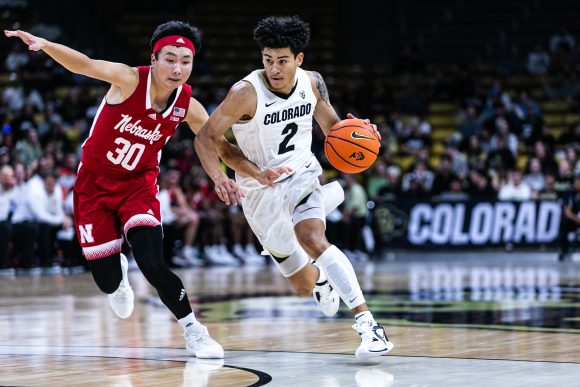 Sophomore guard K.J. Simpson runs down the court with the ball during the exhibition game against Nebraska on Sunday, Oct. 30, 2022. (Io Hartman/CU Independent)

Colorado men’s basketball made quick work of the UC Riverside Highlanders with an 82-66 win in their season opener at the CU Events Center on Monday. This sixteen-point win now puts the Buffaloes at 1-0 in the young season, which is something for CU fans to celebrate. The Buffs used tonight’s win as a prime opportunity to showcase their newfound speed, which will be one of their most important assets of the new season.

After the departure of big men Evan Battey and Jabari Walker from the Buffs after last season, Colorado found itself as a somewhat undersized team. However, what they lack in height is made up for in skill and speed. The Buffs zoomed up and down the court all evening, taking advantage of this speed in transition for plenty of easy point opportunities.

“If you look at our roster, it’s no secret that for this level, we are a little undersized,” said graduate guard Jalen Gabbidon after the game. “One of our strengths is that we’re fast, one through eighteen. We go all out.”

This speed also allowed Colorado to spread the ball out, putting UC Riverside in plenty of disadvantageous situations, which they converted to points. The Buffs finished the game with fifteen assists, but no single player dominated in the assist category. Starting guards KJ Simpson and J’Vonne Hadley finished the game tied with the Buffs’ lead in assists, as they each clocked in three during the game. An additional three Buffs finished the game with two assists, and another three finished with one. After the game, Colorado head coach Tad Boyle spoke about his satisfaction with Colorado’s unselfish play on Monday night.

“It’s amazing what can be accomplished when nobody cares who gets the credit,” said Boyle after the game. “If our players can play like that and think like that, we have a chance to be pretty good this year.”

One of the Buffaloes’ two assist leaders, J’Vonne Hadley, had an awe-inspiring performance in his first game for CU. Hadley was chosen to be a starter in his first game and proved why he deserved that honor. He finished the game with a team-high sixteen points, shooting six for twelve from the field. Hadley also made four of his five free throw attempts and led the team with eight rebounds. Hadley played with infectiously high energy throughout the game, which helped the Buffs and kept the fans at the CU Events Center interested for the entire game.

“Our crowd is going to fall in love with J’Vonne Hadley, if they haven’t already,” said Boyle postgame. “I mean, it’s only been one game, but I’m telling you, he brings it every day. That’s what makes him special.”

Besides Hadley, another new addition for the Buffs had a great showing in the first game in Boulder. Jalen Gabbidon, a graduate transfer from Yale, went all out on the court tonight in his first game in black and gold. Despite coming off the bench, Gabbidon finished the game with twelve points. These twelve points were good enough to tie with Tristan da Silva as the Buffs’ third-leading point scorer tonight. Gabbidon’s passing, speed, and aggressiveness while scraping in the paint significantly contributed to the Buffalo’s speedy attack tonight.

The addition of Gabbidon and Hadley gives the Buffaloes even more depth than before, which is a major upside for Colorado this season. Having options other than Tristan da Silva and KJ Simpson will give the Buffs flexibility on the court throughout the season, which is an asset that shouldn’t be understated.

“You don’t want one guy to be your Energizer bunny because if that guy doesn’t have it on a particular night, you’re kind of flat,” said Boyle. “With this team, hopefully we can have three or four guys we can count on to energize the rest of the group with their play.”

Colorado will head to Louisiana later this week to take on their next opponent, Grambling State University, on Nov. 11th. The game will be on ESPN+ at 6:00 p.m. MST to see if the Buffs can move to 2-0 on the season.