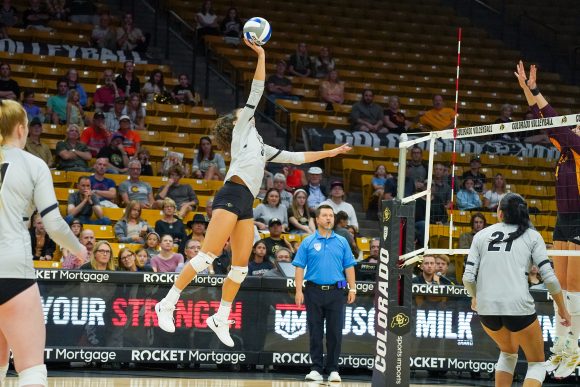 Junior outside hitter Maya Tabron tips the ball over the net during the game against ASU at the CU Events Center on Sunday, Sept. 25, 2022. (Rachel Glazer/CU Independent)

On Oct. 9, the University of Colorado Boulder women’s volleyball team swept the University of California Berkeley Golden Bears in a three-set match at the CU Events Center. This win comes after a tough loss to Stanford on Oct. 7. The Buffs are now 12-4 overall, standing at fifth in the Pac-12 and 4-2 in the conference.

“Cal is a good team,” said head coach Jesse Mahoney. “We put a lot of effort and energy into that match Friday night against Stanford. I knew it was going to be tough today to feel like we were up [to the challenge of playing against Cal].”

The first set started off with a recalled point against the Bears. This happened when one of the Bears players dove for the ball, barely sending it over the net into the Buff’s area of the court. However, the referees decided the ball had hit the court on the Bear’s side during the dive, resulting in the recalled point. In response, the CU crowd cheered, which seemed to encourage the Buffs.

For the first set, the Buffs quickly established a lead with four scoring runs of at least three points or more. Whenever the Bears seemed close to reaching a three-point run, the Buffs managed to retaliate every time. This seemed to intimidate the Bears, who called for two timeouts during the first set. Graduate hitter Lexi Hadrych led the Buffs in kills, dominating the court with five kills every three to four points. The Buffs eventually won the first set 25-17.

On the other hand, the second set remained close the entire time. The Buffs didn’t achieve their first scoring run until eight points in and then only maintained it for three points. Soon, a pattern began to emerge, in which the Bears would retaliate twice as hard every time the Buffs won a point. The teams fought point for point, until the Buffs eventually gained the upper hand on the set point and ended the set 25-23.

“We won the first [set] easy, but it can be hard to sustain [that energy],” Mahoney said. “We needed to continue to push, and we got a little complacent.”

The third set yet again came down to the final three points. The Bears and the Buffs had a consistent pattern of scoring two points and then giving two. After 12 points, the Buffs finally established a lead with a five-point scoring run, quickly followed by a three-point one. Then, the Bears stepped up and ended the Buffs’ lead with a six-point scoring run, putting the score at 16-15 with the Buffs barely holding on to their lead. The Bears soon gained the lead of 22-21 after another scoring run.

Then, for the game’s final moments, the Buffs picked up momentum, ending the set with a four-point scoring run. Junior Maya Tabron led the team in kills, with 12 total for all three sets. Reflecting on the close wins for the last two sets, Tabron said that she believed the team pulled though by relying on “swinging high and covering.”

“It builds confidence in us when we know that our defense is behind us,” Tabron said. “Even if we don’t take the best swing, we know they are going to cover it, and we are gonna get another chance at that play. I think having confidence in them [gives me the] confidence to keep swinging high and hard.”

Overall, though the last two sets came close, the Buffs led in every stat except aces, beating their opponents in points, kills, blocks, assists and digs. The Buffs also scored the first point of every set and had ten scoring runs, seven more than their opponents.

The Buffs will face their next opponent, the Washington State Cougars, at 5 p.m. on Friday, Oct. 14 at the CU Events Center.