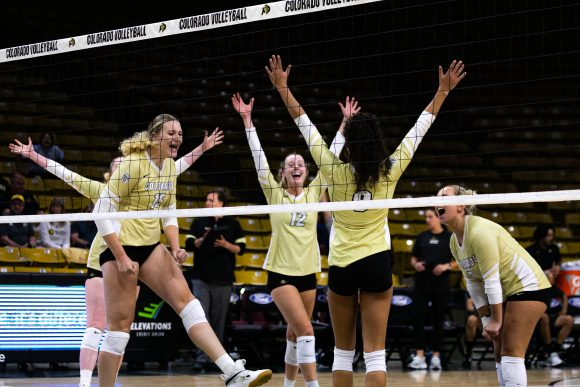 The University of Colorado Boulder’s women’s volleyball celebrate scoring against Western Michigan in the third set of the game on Friday, Aug. 22, 2022. (Io Hartman/CU Independent)

The University of Colorado Boulder’s Women’s Volleyball team maintained their early season momentum this weekend at the CU Events Center after sweeping No.19 Illinois and Iowa, securing an unbeaten 5-0 record to kick off their season.

Against Illinois, Colorado showed resilience by saving a set point to win the first set 27-25; Colorado often turned poor receptions into kills. Early in the second set, Colorado’s reception was still shaky and Illinois was easily escaping the Colorado block. However, Colorado improved, finally finding their first ace and a 15-11 lead: a lead which Colorado maintained, winning the second set 25-18.

Much like the other two sets, Colorado started the third set looking shaky, but unlike the other two, they struggled to find their rhythm. All credit must be given to Illinois as they reduced their number of mistakes. Finding themselves behind, Colorado started slowly, crawling their way back into the set, turning a 6-11 deficit into a 23-22 lead. Savannah Perry’s serves were often the difference in the game. The six-point scoring run, which only ended with the game itself, was directly related to Perry’s strong serves. Colorado completed the impressive sweep, winning the third set 25-22.

Against Iowa, the goal was to not let the performance level drop.

“We wanted to go into this match, playing as hard and as focused as we did yesterday, and I really think we did that,” Head Coach Jesse Mahoney said.

Colorado found little difficulties in the first two sets, managing their way to 25-20, and 25-16 results. The only thing to worry about was avoidable mistakes, which might have mattered more in a different game. The third set was much tighter and nervier than the other two. Colorado fell behind for many portions of the game, yet Colorado eventually pulled ahead again, with an improved serving game from the match against Illinois, and completed the sweep 25-21.

The Buffaloes’ strong offensive showing was reflected in the All-tournament team with outside hitter Lexi Hadrych grabbing the MVP award after nine kills against Illinois, the second most of the Colorado team, and thirteen against Iowa. Also finding their way into the All-tournament team was middle blocker Meegan Hart, who managed two blocks and nine kills against Illinois and setter Taylor Simpson, who completed 77 combined assists this weekend, and has been leading the team to good early results.

“Offensively, we’re a little bit farther along than I thought we would be. We’re putting up some really good numbers and our outside hitters are super efficient,” Coach Mahoney explained.

Next for the Buffaloes is the Arkansas Invitational, Colorado’s first away challenge this season, starting with a game against Florida International Sept. 9, 11 a.m. MST.

“We are all excited to get to play somewhere new and play some new teams that we haven’t really played against before,” said Taylor Simpson. “I think we’re all excited and we just have to play the same volleyball that we’ve played here.”

Colorado will play Little Rock and Arkansas during the invitational.