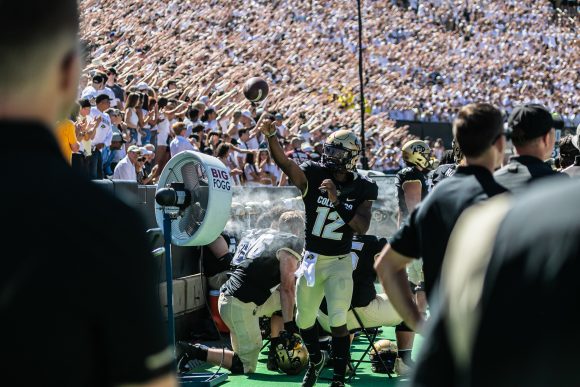 Quarterback Brendon Lewis (12) throws a football with his teammates on the sidelines of the ongoing game at Folsom Field on September 18th, 2021. (Io Hartman/CU Independent)

With the 2022 college football season right around the corner, it’s that time of the summer where we break down some critical storylines heading into year three under head coach Karl Dorrell. After a long offseason full of critical departures and arrivals on the roster and coaching staff, the 2022 season could be a make or break for CU Boulder’s program.

Is Dorrell the guy?

This storyline could have read “Is Dorrell on the hot seat?” or “Was Dorrell the right hire?” but let’s stick with it. After the up and down drama of Mel Tucker’s tenure at Colorado, Rick George went into the pool of available options and chose Karl Dorrell. After bouncing around between the NFL and college, Dorrell returned to Colorado to take the reins of a team that showed much promise after the 2019 season. When 2020 was canceled, then shortened due to COVID, expectations around Dorrell seemed to decrease considering the circumstances. Despite this, Dorrell coached a veteran-led squad to a respectable 4-2 season and had Buffaloes fans excited for the 2021 season. Spoiler alert, it was not as successful as many fans had hoped.

The 2021 football season provided little to root for: a historically bad offense, a talented yet overworked defense, and a coaching staff mixed with the new and the old. The 2021 season, in a single word, was a disaster. Yet, 2022 has proved somewhat of a win for coach Dorrell. After relieving former offensive coordinator and long-time Buff Darrin Chiaverini, Dorrell got his guy in Mike Sanford, made a couple of excellent position coach hires, and cultivated a culture that the players have bought into. The 2022 season will be his most challenging season yet at Colorado. With pressure from both the fan base and the university increasing, questions may arise around his future as head coach.

Can Brendon Lewis take that next step?

Brendon is such a fascinating addition to this team. After getting slotted behind Sam Noyer during the 2020 season and showing flashes of what he could contribute in the Alamo Bowl that same season, Lewis was catapulted into the starting spot in 2021. It was a rollercoaster season for the sophomore, who showed flashes of an elite dual-threat quarterback and moments of a freshman still trying to figure out his style and comfortability on the field. Granted, the offensive line tasked with protecting Lewis was at best below average, and the play-calling was subpar.

The biggest question on everyone’s mind remains: can he take that next step? The answer, which may upset some, is we just have to wait and see. The 2021 season provided invaluable experience for Lewis, and although he now has to learn an entirely new playbook, it should suit his play style. With an improved O-line, a solid running back room, and a group of wide receivers eager to make their mark, expect Brendon Lewis to take that next step and become a driving force for this team.

Did Colorado win or lose the transfer portal?

The offseason was not particularly friendly to the Buffs. After a rough 2021 season, there were bound to be high-profile players putting their names in the transfer portal, and this past offseason was no exception. Star wide receiver Brenden Rice and defensive back Mekhi Blackmon chose to take their talents to Coach Lincoln Riley and the University of Southern California. Meanwhile, defensive back Christian Gonzalez, arguably the best defensive player that CU had last season, joined perennial Pac-12 powerhouse Oregon.

It wasn’t all bad for the Buffaloes, who quietly had a decent-looking haul of their own. Graduate transfer R.J. Sneed ll out of Baylor chose to play his final year at CU and brings talent and a valuable veteran presence to an otherwise young squad. Coach Dorrell also picked up some help for the O-line, in the form of former Alabama tackle Tommy Brown. Linebacker Josh Chandler-Semedo joins Colorado from West Virginia to finish the significant acquisitions and will look to replace the large hole left by Nate Landman. While CU lost some of its higher profile players, they filled holes that needed to be filled.

What’s next for Colorado?

All of the news and commotion around USC and UCLA’s decision to leave the Pac-12 for the Big-10 leaves Colorado in a bit of a predicament. With two of college football’s most storied programs leaving the conference and the rapidly increasing chances that super conferences arise, where does this leave Colorado? On the one hand, many would argue that now is the perfect time to leave the conference for ones like the Big-12, which could present new recruiting opportunities, financial ventures, and a conference that has and continues to produce top-level content.

On the flip side, USC and UCLA’s departure opens up the chances of new schools entering the PAC-12 and for Colorado to join the likes of Utah and Oregon as top teams in the conference. There is no good answer to this situation, and it has to do a lot with how the team performs this season. A good season may see Colorado get some attention from the Big-10 or Big-12, but they may be stuck in limbo for some time if they find themselves bottom of the pack again.

While plenty of other big storylines are heading into the season, these four seem to be the most pressing. The 2022 season should be exciting, and all eyes will be on the Colorado Buffaloes come September 2nd when they will play host to TCU.

Another Buffaloes’ blunder, as CU loses to UCLA 45-17