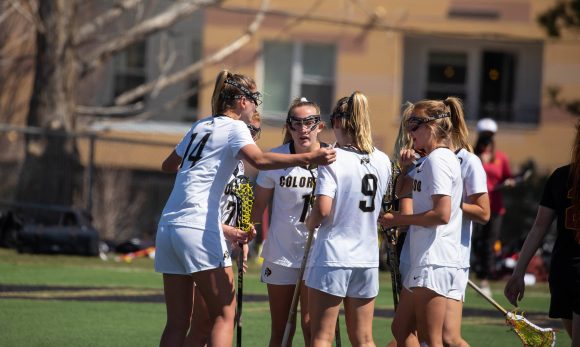 Players on the Buffs lacrosse team hug each other after scoring against USC. April 2, 2021 (Kevin Wu/CU Independent)

The Colorado Buffaloes have lost to the Stanford Cardinals to a score of 16-9 after fifth year attacker Sadie Grozier and senior attacker Charlie Rudy continued their usual role of leading the Buffs in scoring, as each of the respective attackers scored two goals each. This is the second time these two Pac-12 title contenders have faced each other in the last seven days. CU head coach Ann Elliot Whidden discussed what went wrong for the Buff’s in this matchup against a strong Stanford Cardinals team.

“We beat ourselves tonight in that first half,” Whidden said. “You cannot do that against a good team. We have to do a better job executing and playing clean lacrosse. We struggled on the draws and in transition and that hurt us in the end.”

After Colorado was able to hold the lead for a mere 40 seconds in the first quarter, the Cardinals responded by scoring four consecutive goals and ending the quarter with a 5-3 lead that they’ll eventually hold for the rest of the game. CU was led in scoring by Grozier, Rudy, and senior midfielder Kasey Braun as each of the Buffalo athletes scored two goals, making up for six of the nine goals scored against Stanford. Stanford would later score an additional four consecutive goals to further increase Colorado’s deficit late in the second quarter.

CU was overwhelmed with shots all game, as the Cardinals shot the ball 46 times in comparison to Colorado’s 30. The Buffaloes also turned the ball over 13 times, where Stanford only lost possession five times throughout the game. Colorado showed a lot of individual play, as they only amounted one assist in comparison to the Cardinals nine assists.

“In the beginning of the game, Grace (Donnelly) did a great job keeping us in it, making some big saves,” Whidden said on the broadcast. “It came down to giving them (Stanford) too many chances.”

Grozier currently leads the Buffaloes in goals this season, as her two goals today puts her total at 32 goals on the year. Senior attacker Chloe Willard has also pitched in a total of 17 goals this season while also leading CU in assists with 10. The triple threat of Grozier, Willard and Rudy have been responsible for scoring exactly half of Colorado’s goals so far this season, scoring 71 of CU’s 142 goals.

With a 17-16 win over the Stanford Cardinals and a 16-10 win over the California Bears this previous weekend, the Buffs have now won three of their last four games, bringing their overall record to 8-3 on the season. Although Colorado has the best overall record in the Pac-12 by having the most wins, they currently sit in an unimpressive fourth place after their three losses came from Pac-12 opponents Arizona State, University of Southern California and Stanford, which naturally ranks them higher than CU in the Pac-12 standings.

Whidden explained how Colorado’s next matchup against the California Bears is important in order to set the team up for success during tournament play.

“We have to be more confident from the start on Sunday and do a better job executing the little things,” Whidden said. “Sunday is a big game for us, one we need to win if we want to give ourselves any chance at the Pac-12 championship or bye in the tournament.”

It is intriguing to note that the NCAA has implemented a new ruling within Division I lacrosse, as the panel agreed to changing their collegiate lacrosse games to four 15 minute quarters rather than two 30 minute halves. This could positively or negatively impact Colorado and their wins, as giving these players additional breaks gives each team more of an advantage than previous seasons.

As previously mentioned, the Colorado Buffaloes will have an important Pac-12 matchup facing the California Bears this Sunday, Apr. 3 at 2:00 p.m. MST at California Memorial Stadium.