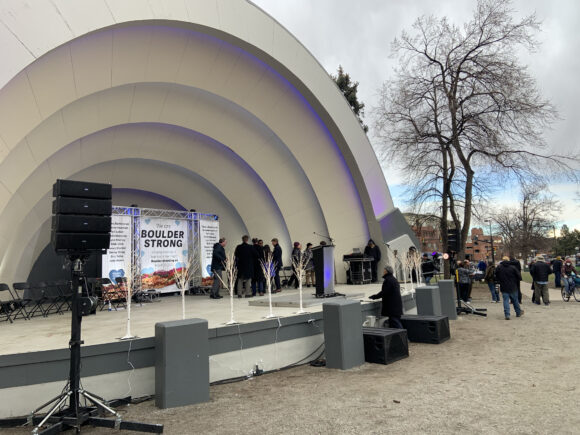 Boulder Police Chief Maris Herold stood in front of dozens of uniformed law enforcement officers and guests outside the Boulder Police Headquarters on Tuesday, March 22, 2022. Through tears, she expressed her gratitude for the sacrifice of a man who died a year before.

Herold was one of many community leaders to speak at a ceremony honoring Eric Talley, a Boulder police officer and one of the 10 people killed by a gunman at the Table Mesa King Soopers in 2021. Talley was the first police officer to arrive at the scene and was shot when he entered the building.

The mass shooting, which drew sympathies and media coverage from across the country at the time, was solemnly commemorated throughout the day.

“We will always remember March 22, but the events of that day will not define us,” Herold said. 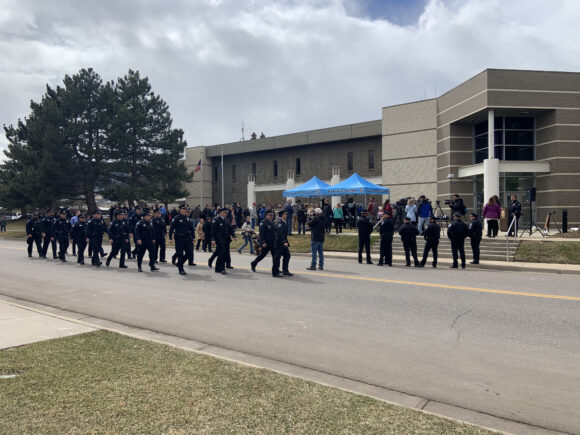 Messages of hope and grief

Many other notable figures in the community echoed Herold’s sentiments during the day, at that event and a separate community gathering later on. Boulder Mayor Aaron Brockett said that while Boulder has had plenty of hardship over the past years, that trauma does not encapsulate the city.

“I think what defines us is the way our community comes together in times of tragedy,” Brockett said.

The mayor was serving as a city council member when he first got word about the shooting. Brockett said that he, like many others, was heartbroken to learn about the tragedy.

“My family actually was in Santa Fe for spring break and I started getting messages on my phone so I opened up my computer and tried to see what was going on,” he said. “You could just see the chaos and the confusion and the terror.”

Community leaders focused their comments on the impact the tragedy has had on the Boulder community. During the ceremonies, speakers told onlookers that carrying grief and pain over the past year was not abnormal. While many encouraged audience members to look forward, they were also reminded to allow themselves to grieve.

“Just because a year has passed doesn’t mean we need to be okay,” Gov. Jared Polis said at the community memorial. “Grief is not linear.”

Congressman Joe Neguse, who spoke at both events, said that Boulder residents should continue to find resilience in their community and contribute to that goodwill.

“As we remember, as we heal, as we take the next step forward, let us be kind,” Neguse said.

Healing at the university

In the days and weeks leading up to the anniversary, different groups and organizations held their own memorials. The University of Colorado Boulder’s Student Government held a luminara remembrance event on March 15. Participants could write on paper bags that would be lit up with candles and displayed on campus.

“It has only been one year since the shooting, and it really shook up the safe feeling that my friends and I always felt in Boulder,” said sophomore Jess Rampersaud, the Physical and Mental Health and Safety Chair of CUSG, who organized the event. “I wanted to give students (and) community members alike a space on the CU Boulder campus where they could intentionally reflect and think about the last year.”

The university’s Office of Victim Assistance has also provided additional resources for impacted university faculty, staff and students for the anniversary. Jessica Ladd-Webert, the director of OVA, said that her office wanted to provide assistance that would allow people the opportunity to also find support in their communities. 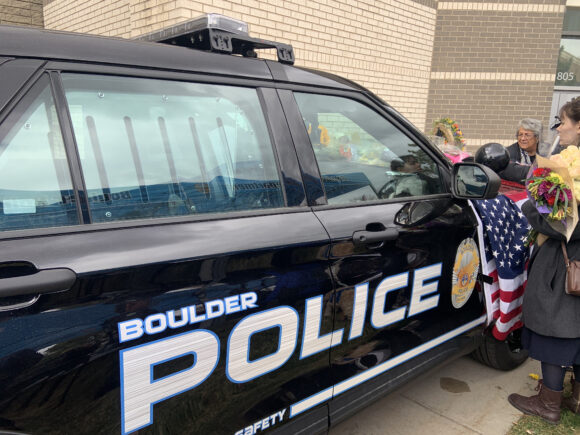 A patrol car outside the Boulder Police Headquarters that is adorned with items honoring Eric Talley, the police officer killed in the Table Mesa Shooting. March 22, 2022. (Henry Larson/CU Independent)

As the Boulder community continues to heal from the Table Mesa shooting, and an array of mass tragedies in recent months and years, university and community supports will stay in place in the time ahead.

“It’s okay to smile and laugh and celebrate life’s special moments, even while acknowledging the 10 friends, neighbors, coworkers, loved ones that aren’t able to smile or laugh along with us,” Gov. Polis said.

The Boulder Strong Resource Center, a collaboration between Mental Health Partners and the City of Boulder, offers therapy and other crisis assistance to those impacted by the shooting. It’s open Monday – Saturday at 2935 Baseline Rd.

Mayor Brockett said that he recommends community members visit the Resource Center if they feel overwhelmed by the tragedy.

“If you’re feeling overwhelmed, just walk on in. Pet a therapy dog. Talk to a mental health professional. There are people out there,” he said.