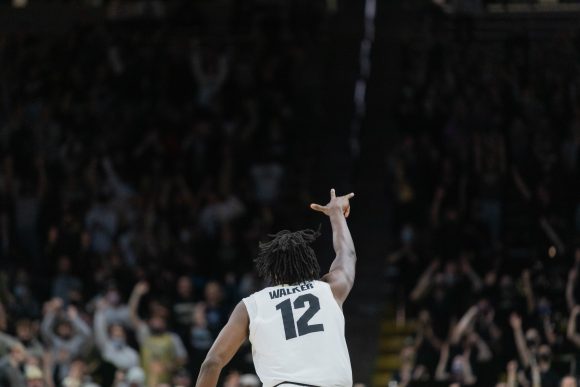 Jabari Walker celebrates a three-point basket as he runs towards the student section at the CU Events Center. Feb. 12, 2022. (Kara Wagenknecht/CU Independent)

The Colorado Buffaloes (18-9) are headed into their final three games of the regular season after a three-game road sweep, which brings their winning streak to five in a row.

Despite the losses of senior guard Elijah Parquet (lower leg injury) and freshman center Lawson Lovering (torn MCL), head coach Tad Boyle has found ways to lead the Buffs to success. Freshman guard Nique Clifford has started 11 games in a row in Parquet’s absence and has contributed as an aggressive defender, playmaker, and rebounder for the Buffs.

Sophomore guard Luke O’Brien, who has helped cover for the losses of Parquet and Lovering, had a career night off the bench at Oregon State. O’Brien had 14 points in 23 minutes, both of which were career highs.

The Buffs continued their road trip in Northern California, where they battled Cal and Stanford. At Cal on Thursday, freshman guard K.J. Simpson scored a career-high 19 points off the bench. Walker put up another 19 alongside 15 rebounds for his fifth straight and 14th overall double-double. Falling just behind, senior forward Evan Battey posted 18 points.

The Golden Bears held a slight seven-point lead at halftime before the Buffaloes could overcome the deficit to secure their fourth straight victory.

In their final matchup at Stanford on Saturday, the Buffs once again faced a two-point deficit at the half. Colorado dominated the second half, scoring 41 points compared to Stanford’s 22. Battey’s senior leadership led the team with 15 points and four rebounds but was just one of five players who scored in the double-digits. The victory was the team’s fifth straight as they now sit at 10-7 within the Pac-12 Conference.

Clifford fell just behind Battey with 14, while da Silva, Simpson, and sophomore guard Keeshawn Barthelemy each scored 10. Battey’s statistics made him just the 14th player in Colorado history to reach 1,200 career points and 600 career rebounds.

“Player-led teams, which is what we are now, are so much more dangerous than coach-led teams,” said Boyle. “It starts with Evan Battey but doesn’t end with Evan. This whole team is really coming together as a group, they love each other, they like being around each other, they have a lot of fun on the bus or plane, at practice. They really care about each other and it shows.”

Colorado is nearing the end of its regular season with a home series against both Arizona universities this Thursday and Saturday, before heading to Utah for the regular season finale the following week. The Buffs tip off against Arizona State on Thursday at 7 p.m. MST at the CU Events Center.