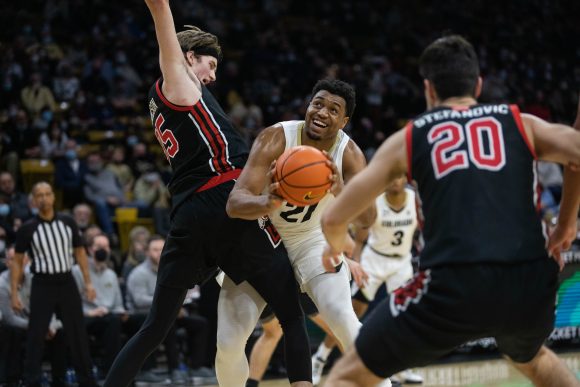 Senior forward Evan Battey struggles through traffic to score a basket during the second half at the CU Events Center. Feb. 12, 2022. (Kara Wagenknecht/CU Independent)

After a sluggish offensive first half, the Colorado Buffaloes came back to defeat the California Golden Bears 70-62, outscoring the Bears 42-27 in the second half.

With Jabari Walker’s 19 points and 15 rebounds, this win over California marks his fifth straight game with a double-double. Sophomore forward Jabari Walker noted how the work that Colorado has put in practice has shown during this four-game win streak.

“We want this road trip bad,” Walker said. “We want to get the sweep. We took care of our bodies and did everything we needed to do leading up to the game. Our practices had a lot of energy, so this win was a result of that.”

Colorado faced a scoring drought that had lasted over five minutes in the first half, resulting in the Bears taking an early 35-28 lead heading into halftime. The halftime pep talk must have worked, as the Buff’s outscored California 14-1 within the first few minutes of the second half.

The scoring triplet of Jabari Walker, senior forward Evan Battey, and freshman guard K.J. Simpson ended the game with a combined 56 points and 23 rebounds. Walker also discussed how he uses his body structure to improve his game offensively and defensively.

“I’m just trying to use my leaping ability and my long arms to impact in any way whether that’s blocking shots or moving my feet on defense,” Walker said. “As far as the offensive side, trying to knock down threes. My three-point percentage has improved from earlier on. Just trying to use my legs and be well-rounded to make it a hard matchup.”

Although Colorado ended the game with more rebounds and free throws than California, the Bears still managed to tally more assists, blocks, and steals than the Buffaloes. The Buffaloes’ 21 free throws, in comparison to Cal’s six free throws, may have been a reason Colorado secured the win. Walker mentioned how the second half comeback started with the players’ mentality.

“It was just us talking to each other,” Walker said. “We wanted it more, the players wanted it the most so it has to be us that starts the momentum.”

The win over California marks head coach Tad Boyle’s 250th win as a Colorado Buffalo. The Colorado Buffaloes will travel to Stanford, CA to face the Stanford Cardinals on Saturday, Feb. 19 at 8:00 p.m. MST to try and increase Boyle’s win total.