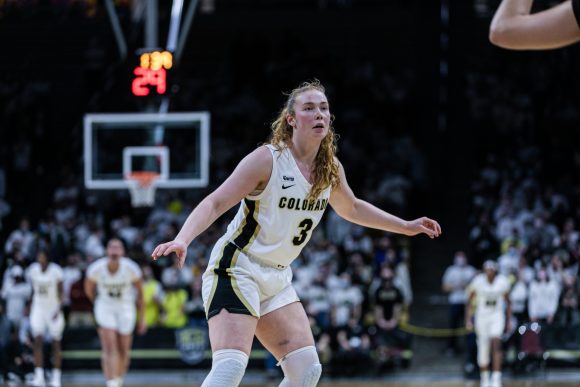 Midway through the second quarter, the University of Colorado women’s basketball team air-balled two three-pointers in the span of only a few minutes. The missed shots were two of many misses for the Buffs, as Colorado managed only 19 first-half points against Washington State. The Buffs emerged with a newfound vigor in the second half and leaped out to a seven-point lead. The lead didn’t last long, as ultimately, an inconsistent effort on both sides of the ball allowed the Cougars to snatch a 63-56 win over Colorado at the CU Events Center.

From the first tip, the Buffs didn’t appear to be themselves. Colorado lacked the energy and emotion that is necessary for success. Often throughout the game, it felt like Colorado was going through the motions on offense as they labored to score baskets. Despite this, the Buffs managed to battle through their woes and lead 12-10 at the end of the first quarter.

The offense went from bad to worse in the second quarter, as Colorado couldn’t seem to buy a basket. CU didn’t score a single field goal for a brutal eight-minute stretch. That run ended just before halftime as senior forward Mya Hollingshed hit a rhythm three-pointer allowing Colorado to limp into the break down only three points.

For a brief stretch to start the second half, the Buffs appeared to have found their old selves, as three-pointers by Hollingshed, sophomore guard Tamiya Sadler, and senior guard Tayanna Jones helped Colorado grab back the lead midway through the half.

It didn’t last too long, as the Cougars clawed back to grab a one-point lead at the end of the quarter on the back of a 13-5 scoring run largely led by guard Charlisse Leger-Walker with seven points.

For the remainder of the game, the Buffs battled back and forth against the Cougars. But every time Colorado scored, Washington State had an answer. With less than a minute to go, the Cougars led by two points, and CU needed a stop. They played a hard-nosed defensive possession, but ultimately Leger-Walker found her sister Krystal Leger-Walker in the corner for a three-pointer to give Washington State a five-point lead. Leger-Walker’s basket sealed the game as a minute later Colorado fell to Washington State, 63-56.

The Buffs will hope to regain their form and snap their two-game losing streak on Sunday as they host the University of Washington at noon MT.