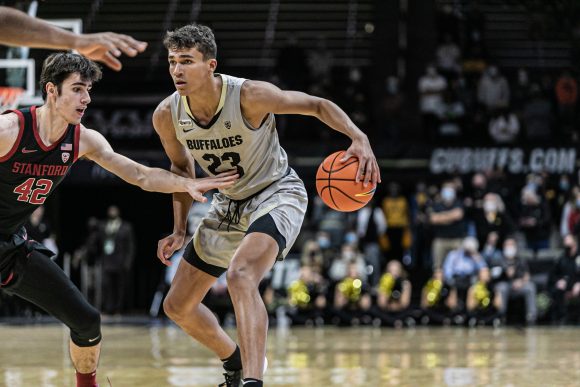 The Colorado Buffaloes (11-3) defeated the Washington Huskies (6-7) at the Coors Events Center on Sunday, 78-64. CU is now 3-1 against Pac-12 opponents and finds itself on a five-game winning streak. They sit at fourth place in the conference standings, behind only UCLA, Arizona, and USC. After sophomore forward Tristan da Silva recorded a career-high in points, he explained how his teammates were a large part of his success.

“It’s a steady process, and today I had the opportunity to play,” Da Silva said. “I was aggressive, made some shots, and my teammates gave me the ball. That’s all you can ask for and I try to make the most out of it.”

It was an all-around team contributing performance as a handful of Colorado’s hoopers made an impact. Da Silva led the Buffaloes with his 22 points, as he scored 14 of those points in just the first half.

The leader of the Buffalo herd, sophomore forward Jabari Walker, also chipped in by grabbing 13 rebounds and posting 11 points. Denver native freshman guard Julian Hammond III is beginning to establish himself as a possible 2023 starter, contributing 14 points and a timely three-point shot.

Sophomore guard Nique Clifford represented the Buff’s depth by recording eight points and eight rebounds off the bench. After securing his 300th win as a coach (244th for Colorado), head coach Tad Boyle noted Hammond’s recent success and his ability to forget the mistakes made on the court.

“The thing I love about Julian is that he has a short memory,” Boyle said. “He drove the ball in the lane and turned it over, and then we got a steal and hit him in corner. He didn’t even hesitate, he just rose up and shot the three like he expected to make it, and he did make it. He’s got a short memory, and you have to have that…Julian was ready when his number was called, and he has really stepped up. It gives me confidence in him and gives us an added guy when KJ (Simpson) comes back so we can play deeper into our bench.”

The Buffs were dominant on the glass in this matchup, as they out-rebounded Washington 47-27. They also showed their talent by recording more assists (13-11) and blocks (6-3) than the Huskies. Colorado took advantage of Washington’s poor field goal shooting (36.2%) as they made nearly half their shots throughout the entire game (48.4%).

“It was huge, considering the statistics that we look at,” Boyle said. “Plus 20 on the boards is the stat that jumped out of the stat sheet to me. Taking care of the ball and getting great shots, basketball is a simple game, and I try not to overcomplicate it.”

Although CU displayed one of their best team performances of the season, their ball-handling skills seemed to be one of their only key issues on the day. The Huskies were able to secure eight steals in the game, compared to Colorado’s two, which amounted to CU committing a total of 11 turnovers.

The Colorado Buffaloes will face a fierce Pac-12 opponent on the road in the No. 8 Arizona Wildcats on January 13th at 9:00 p.m MST.